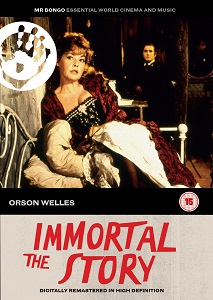 Made for French television in 1968, Orson Welles’ The Immortal Story is a beguiling and hypnotic meditation, on art and artifice, and the trickery and magic of storytelling. Adapted from a short story by Danish writer Isak Dinesen (Karen Blixen), it tells the tale of an elderly and wealthy merchant Mr. Clay (Welles), who gets his meagre amusement from having his accountant (Roger Coggio) read over the account books of his many interests and companies as he slowly trundles towards a somnambulant death in a dusty corner of Macao. 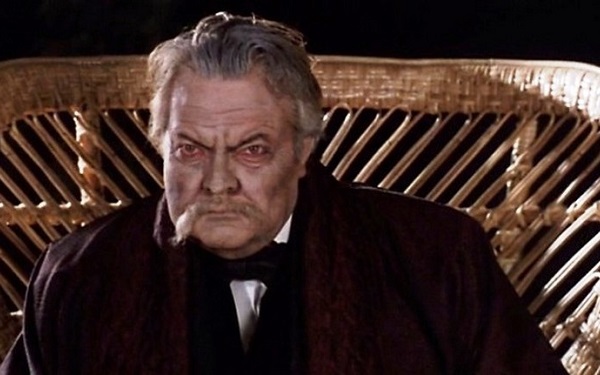 Dissatisfied with the figures and arithmetic his life has become, he longs for something else, something more like the lives other people lead, perhaps. He has heard of a story that was told, a story that everyone knows, but a story that everyone supposes to be a legend. The full story is half-told and hinted at to begin with, and involves a rich man who hires a sailor to sleep with his wife, but Clay with his immense, almost epic lack of imagination wants the story to be true, and wants to will it into existence, so he can witness it, be a part of it.

However, the only way of doing this is through counterfeit. He sends his clerk out to find a woman who can play his wife. He recruits Virginie Ducrot (Jeanne Moreau), a fallen woman. Later, Clay assists in recruiting a blonde haired sailor (Norman Ashley) and bringing him to the house for the rendezvous. The problem with Mr. Clay’s story is that everyone has already heard it and they have other stories of their own, equally strange, if not more so. Virginie has a whole lifetime of hard luck, her family’s downfall intimately entwined with the business of the unknowing Mr. Clay. The sailor has recently been rescued from an island where he was shipwrecked and seems in a state of otherworldly shock, damaged by an extended period of enforced solitude that has made the company of people an alien experience for him. Welles has made an entire career exploring notions of artifice and the liar’s route to truth from his early radio work and the cause célèbre of his War of the Worlds broadcast/hoax to the jigsaw portrait of Charles Foster Kane. Later in his career these concerns became more pronounced leading him to the amazing postmodern pseudo documentary F is for Fake and his last, incomplete and as yet not fully seen film The Other Side of the Wind, which features a day in the life of a film director played by John Huston.

The Immortal Story is a modest and consciously small tale of the telling of a tale. It is like an ornate Chinese box which contains only other boxes and whether or not that is the equivalent of nothing at all is left open to interpretation. Even with his modest resources –Welles shot the film at his house in Spain and used waiters from the local Chinese restaurant to give a flavour of Macao – the film is beautifully and compellingly shot. His composition is frequently beautiful – although Welles hated colour, he uses it well here – and has the effect of pulling you into the story. The performances have a hypnotic quality as if everyone is sharing Clay’s half-asleep existence. Even this extended English version is only an hour long, making it barely a feature: the French version was shorter and the intention was to make another Dinesen short story to create a fuller length film. However, it is a precious nugget, showing that for all the legends of Welles and his wasted potential, he actually made a substantial body of fascinating work.