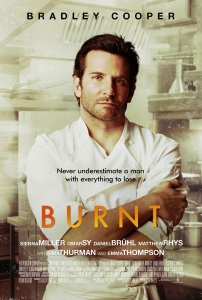 A meticulously coiffed Bradley Cooper cruises around town on a superbike. Haute cuisine relies just as heavily on presentation as actual substance and Cooper still looks the part in John Wells’ Burnt (2015) – even as a recovering addict and bad boy superstar chef. Jon Favreau’s Chef (2014) provided welcome chicken soup therapy with the loveable actor-director at the helm. However, Burnt follows more the Gordon Ramsey route, its tone and narrative distinctly bitter and vindictive, with just a dash of redemption thrown in. 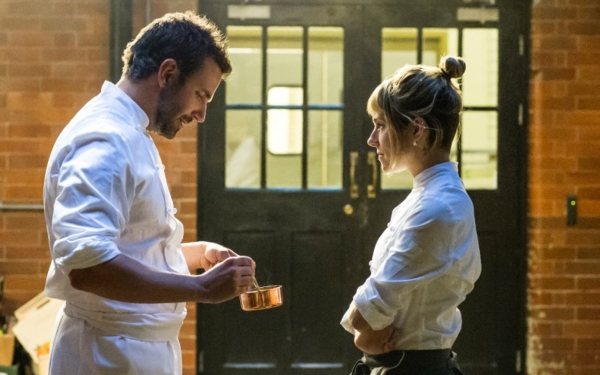 What could have been a Whiplash-style study of perfectionist obsession is diluted into a middling affair unsure which of its many flavours to plump for. On that long shopping list of ingredients is a stellar cast and therein lies part of the rub. Having gone MIA from Paris three years previously in a drink and drug-addled haze, Adam shucks a million oysters in New Orleans as a kind of self-imposed penance before returning to Europe to establish the world’s greatest restaurant in London and seal that third Michelin star.

Penniless but supremely confident, he enlists the help of former colleagues who he uniformly shafted in one way or another but who all made the move across the Channel. Playing on the thinly veiled adoration of maître d’ Tony (Daniel Brühl), Adam uses the threat of Uma Thurman’s food critic to take over in the kitchen. She may be a lesbian but obviously couldn’t resist his brusque charm, also taking a slice of the pie for herself, if you will. Like a bread basket brought out at the start of a meal, Thurman is soon forgotten and next up is the wonderfully charismatic Omar Sy as sous-chef, Michel. Due far more than a pound of flesh for the Paris debacle, he does his best to add depth to an underdeveloped character. Alicia Vikander flickers momentarily as Adam’s old flame but doesn’t shine as brightly as is her custom and although he breaks more plates than a Greek wedding party, British actor Matthew Rhys is stifled as a rival chef aggrieved and jealous of Adam’s talents, the proof of which is in the finished pudding rather than any genuine artistry witnessed.

Emma Thompson features as Dr. Rosshilde, tasked with monitoring Adam’s sobriety, who attempts a deeper psychological dig mid-blood test but again this narrative stream is one of many to hit a dead end; perhaps the oddest of which is the intermittent appearance of two heavies after Adam for drug money owed them. It’s difficult to discern whether writer Stephen Knight added this to elicit some kind of sympathy for Cooper’s tyrannical egotist but it serves more to distract than compliment. Sienna Miller again appears alongside her American Sniper co-star, Cooper. Like Sy, the mentor and muse pairing should be credited with striving to elevate an uncharacteristically weak script and indefinite direction to something worth savouring; an apology to a poorly cooked turbot is a particularly awkward low point. The visuals of cinematographer Adriano Goldman do highlight the many orgasmic creations on offer and fluid movement around the kitchen give a sense of its overheated and dynamic environment but just as visit to Billingsgate fish market sees Helene and Adam in search of sole, Burnt’s soul is lost in a recipe of too many undercooked parts.