Horror cinema is forever walking a terrifying tightrope between internal anguish and external torment. This endless battle rages in the both the creeps and conventions of Corin Hardy’s directorial The Hallow (2015). The music video director has made an assured first step into the realm of feature films but, much like his protagonists, he’s not quite the master of his new domain. While his main character Adam (Joseph Mawle) is filled with inner conflicts – between gentility and violence, facts and fairytales – so is the film. 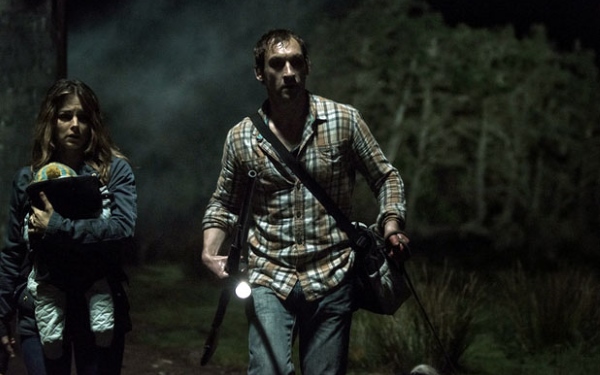 The Hallow is torn between modern mythology and out-of-the-box genre ghouls. There is no denying that the creatures that emerge from the woods to terrorise Adam and his wife, Clare (Bojana Novakovic), are impressively rendered, crafted with a combination of techniques both physical and digital. The problems with them are two-fold, however. They lack a certain amount of definition as antagonists, their motives clichéd – if you catch them at all – and only tangentially connected with the far more interesting and much more scary, threat that begins to manifest in Adam himself. They also suffer from the age-old flaw of being far less scary than the suggestion of them was.

In a lyrically atmospheric opening, Hardy introduces the couple and their infant son Finn arriving in a remote area of Ireland. Adam is a conservationist whose work in the forest is suspected by the locals and – as they’re told – unappreciated by the woodland-dwelling faeries. The tone approximates an unidentified point on an imaginary line drawn between Lars von Trier’s Antichrist (2009) and Tomm Moore’s Song of the Sea (2014). Irish folklore is intertwined with something undeniably moody and rotten. Mythology butts up against scientific reasoning as Adam discovers a decomposing deer corpse covered in a dark goo. Examining it back in their rambling new home, he discovers that it contains elements similar to a fungus that takes over and controls the minds of the ants it infects. The goo seems to be the catalyst for strange goings on that Hardy and co-writer Felipe Marino employ for around fifty minutes. A high-point comes when Adam is locked in the boot of his car as unseen beasts attack from without and Finn screams in fear from the backseat.

Naturally, the narrative must progress and as the plot veers towards the traditional final siege, Adam’s own demons begin to present themselves adding further flavour to the situation. He has already shown himself quick to anger despite his tender, loving exterior and he must struggle to retain his paternity as monstrosity consumes him. Mawle is a very safe pair of hands for handling such a transformation, that sees him losing and gaining humanity concurrently. Regrettably, what is going on around him lacks the same level of complexity. Novakovic has a largely thankless job as Wife and Mother and though the jeopardy is built to a palpable level, it dissipates as quickly as the action escalates. A variety of reminders (intentional or no) of 1987’s Evil Dead II – from Adam’s battle for control of himself, to his torn shirt/scythe look and the Book of the Dead facsimile – don’t help maintain the meticulously rendered ambience.