DVD Review: How to Change the World 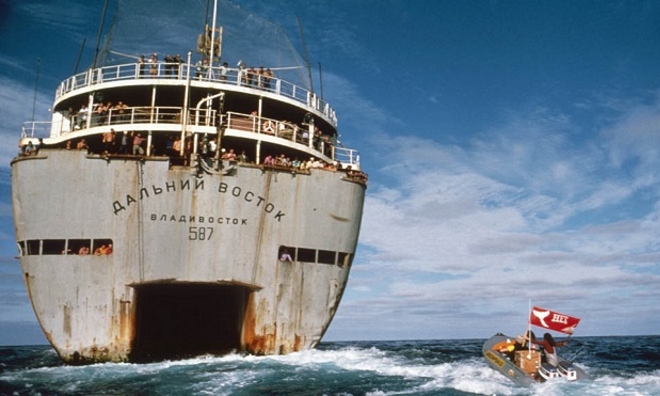 “If you wait for the meek to inherit the Earth, there won’t be any Earth left for them to inherit,” says Bob Hunter towards the close of Jerry Rothwell’s entertaining and inspiring documentary How to Change the World. Hunter was a journalist for the Vancouver Sun when he decided to pursue a more active role in the burgeoning environmental movement that was blossoming in Canada in Sixties buoyed as it was by the hippy and peace movement and an influx of those fleeing the draft from the US. In 1971, Richard Nixon planned an underground atomic bomb test on Amchitka, a tiny island of the coast of Alaska. Hunter and a small group of activists chartered a boat the Phyllis Cormack which they retitled Greenpeace 1 with the intention of sailing to the island and putting themselves in harm’s way in order to draw world attention to the nuclear test and hopefully prevent it.

From the very start the mission seemed quixotic, if not foolhardy – the inexperienced group struggled with the logistics of what they were trying to do and ultimately amidst scenes of bickering they withdrew and the test went ahead. However, they had succeeded in planting what Hunter called a ‘mind bomb’, a media event that changed perceptions and the small group were greeted as heroes on their return. Although their actions had not prevented the detonation of the bomb, further testing was delayed and then cancelled as public opinion, partly generated by the group’s endeavours, turned against testing. Inspired by the work of scientist and environmentalist Paul Spong, Hunter turned the group’s attention towards the plight of the whales, several species of which were already on the verge of extinction. Again the Phyllis Cormack was chartered and now armed with a film crew, a synth player (to communicate with the whales) and a small number of inflatable Zodiacs, the group set off in pursuit of the Soviet whaling fleet with the intention of putting themselves and their boat in-between the harpoons and the whales.

The footage gained is remarkable. As the disorganised adventurers plough through the waves, it is almost by pure chance that they happen across the whaling fleet which is a floating slaughterhouse for the whales. Not since The Cove has a documentary given such a sense of adventure to environmental activism as well as making the blood boil at the sight of wild animals being hunted in such a merciless fashion. There is a real sense of drama as the Zodiacs begin to interfere with the Russian vessel and no one knows whether the tactic will work, or even, because of a technical fault, whether the cameras rolling are actually capturing the events unfolding before them.

The success comes once more in the bearing of witness – and this time it is on a global scale. A true hippy, Hunter is very uncomfortable with power – his more intimate writings are voiced by actor Barry Pepper – citing Allen Ginsberg who told him when you have hold of power let it go before it freezes in your hands. The two aspirant leaders are Paul Watson, a firebrand who begins to resent the more conciliatory side of Hunter’s nature and Patrick Moore (no relation to the TV astronomer), a privately educated voice of calm who wants to see the organisation organised more effectively and centrally led. With Hunter, less and less capable of leading, frazzled by the stress, the personal friction and resorting to Valium to get him through the day, the warring factions threaten to tear the nascent movement to pieces.

Although Greenpeace have given Rothwell incredible access, he is unafraid of showing the organisation in its early shambolic and dysfunctional stages, as well as documenting the rows and allowing the participants to air their grievances – one of the founders is now a climate change denier – and rip each other up at a distance. There is something elegiac about the film. The fun and the madcap adventure, the heartfelt anger and the sense of purpose all preserved on thousands of feet of super eight film is poignantly evoked. The old eco-warriors themselves maintain for the most part a spark in their eyes as they articulate what drove them and what drives them still. This is a first-class doc heralding the unsung heroes of what has turned out to be a prescient and vital, the most vital, political movement of our time.