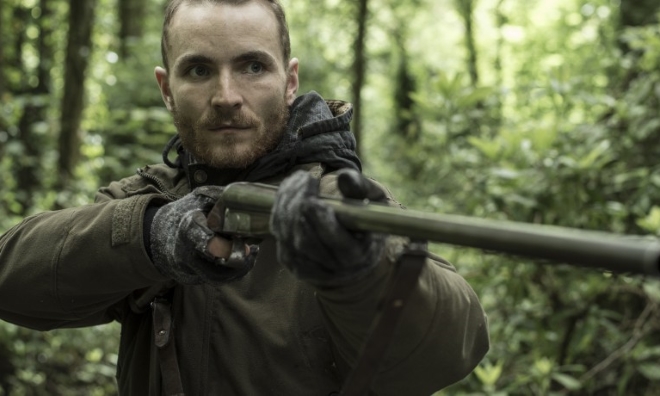 The term post-apocalyptic has now evolved into a handy catch-all for any film set in a near-future where society has seemingly crumbled. It’s trendy and it’s edgy but the genre it denotes is now filled to the brim with bombastic material. Enter The Survivalist, which thankfully breathes new life into the term, giving us a restrained and refreshing window into life after society collapses. Equal parts character study and taut psychological thriller, The Survivalist deserves its Bafta recognition. Every frame is a loaded gun and its dead fun waiting for it all to go off. Our protagonist is the titular Survivalist (Martin McCann). Gaunt and hardened, the Survivalist is not a man to be trifled with. As he drags a dead body to a growing heap and then returns to his cabin in the woods, a sense of dread hangs thick in the air.

The Survivalist lives up to his name: growing his own crops, making his own lamp oil, using water reserves to carefully bathe himself. His precarious lifestyle is further threatened with the arrival of hardy mother-daughter duo Kathryn (Olwen Fouere) and Milja (Mia Goth). The women are a constant threat the the Survivalist and for a majority of the film’s runtime, dead is just a gunshot or well-wielded blade away. Director Stephen Fingleton is not interested in glamorising this world, evident from the opening grimness to the mounting desperation to stay alive as the film goes on. Sex in exchange for shelter, primitive medical care (including maggots as homeopathic plasters) and violence as a necessary means of survival all factor in here – as films set in the post-apocalyptic canon are wont to do. But The Survivalist capitalises on matching the remote setting with equally silent and emotionally distant characters.

Our protagonist, Kathryn and Milja retain a basic humanity but the predilection towards caring for one another appears to be a luxury of the old world. With minimal dialogue, actions here are extra meaningful and to watch each precarious glance, movement and word seeks to build the tension in the best way. It’s a simple but brutal story. Some have likened The Survivalist to Mad Max. That may be true in terms of its otherworldly gruesomeness. But this film has a quiet power that invokes all out fascination. The flashiness or boring emphasis on the post-apocalyptic element is scrubbed out here. Instead, The Survivalist skillfully references it without beating us over the head. As is key when making this kind of film, the focus on physical and psychological fatigue amidst the dire circumstances duly captivate.