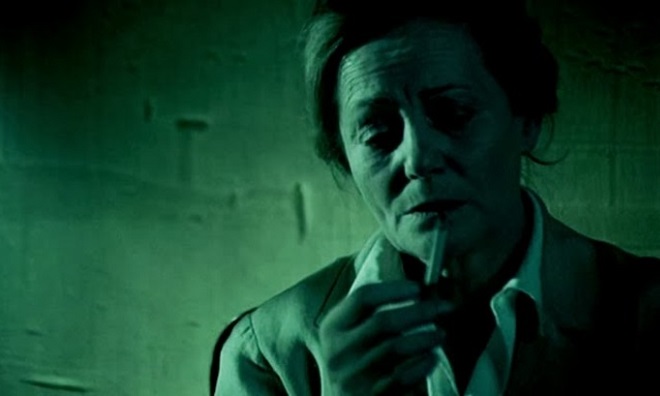 “Who are we living with? What kind of people?” asks a character in the midst of Bela Tarr’s 1984 feature Autumn Almanac, but this being Bela Tarr the complaint of awkward cohabitation takes on a further metaphysical twist: “Are we even alive?” Hédi (Hédi Temessy) is an elderly middle class dowager, living in a sprawling apartment of crumbling grandeur. Attended by her nurse and confidante Anna (Erika Bodnár) and Anna’s lover the morose Miklós (Miklós Székely B.), Hédi is plagued by her wastrel son János (János Dezsi) with whom she has a toxic aggressive relationship; and wooed by a possible suitor in the former teacher Tibor (Pál Hetényi). As each character jockeys for position, a repressed aggression simmers.

Anna seems to be the master manipulator, using her wit and her sexuality to further her ends, but her seeming independence and breezy manner is contradicted by her servile role and her lack of means. Essentially a series of conversations in which the worldly concerns of money and power lead the whispering conspirators on to existential grief – as in the above quote – within the batting of an eyelid. Cinematographer Sándor Kardos weaves his camera through the apartment, giving at once a cinematic grandeur to wrangling while at the same time squeezing the characters into a languidly claustrophobic corner. Eschewing his habitual acid rain monochrome, Tarr uses vibrant colours – oranges and blues – almost as characters in themselves. There’s a wild inventiveness to some of the shots – we scrutinise the unwilling household through the ceiling and then in a jaw-dropping shot through the floor – but in the bravura there is also a feeling of dissatisfaction with the stasis of what is essentially a chamber piece.

Tarr’s collaborators are beginning to form around him, including composer Mihály Víg who will create such wonderful scores for Tarr’s later films, particularly Werckmeister Harmonies and The Turin Horse, but he hasn’t yet happened upon novelist László Krasznahorkai, the chronicler of Satantango and the muse who will become the scenarist throughout the rest of Tarr’s career. With its heavy formalism and humorless melancholy, Autumn Almanac is often in danger of sinking under the weight of its influences: August Strindberg and Ingmar Bergman feel like the usual suspects here. However, the committed performances, masterful framing and the beautiful dying waltz of the camerawork are enough to hold the attention and to indicate the masterworks which are yet to come.