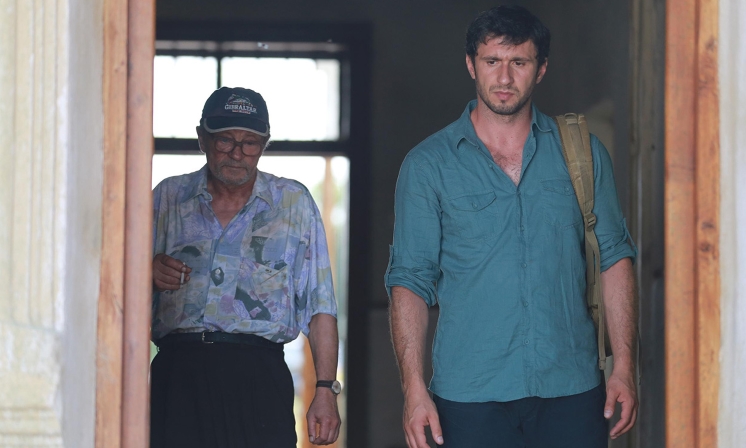 The camera passes over some scrubland, tracking close to the ground like a sniffer hound and then out over a pond of algae-covered water where, in the middle, a couple of bubbles break the surface and a grisly object rises suddenly: a severed human foot. So begins Bogdan Mirică’s debut thriller Dogs (Caini), competing in the Un Certain Regard section of Cannes. Inheriting a large parcel of land from his grandfather Alecu, Roman (Dragoș Bucur) leaves Bucharest to visit his new property with the intention of selling it. There’s a lonely rundown house, a vicious dog called “Police” and land as far as you can see running along the Romanian border. At night there are also headlights out in the distance and something obviously going on.

When, with the help of a sales agent, Roman tries to scare the strangers off, it becomes apparent that whatever nefarious dealings are going on violence is not far away. The police consist of a young, perpetually hungry lug and Hogas (Gheorghe Visu), the old chief who is dying of cancer and racked with a cough. Law-keeping is pretty much a joke (see name of dog) and even the thin veneer of state control is being downsized as rural police stations are to be closed and replaced with ‘mobile units’. Amateurishly, Hogas inspects the foot from the pond on his own kitchen table after dinner in a long, slow scene that probably won’t entice anyone to make CSI Romania any time soon.

To complicate matters further, Roman’s girlfriend Ilinca (Raluca Aprodu) comes to visit, not realising the danger that surrounds them in the deep, dark countryside. That darkness is embodied later by Samir (Vlad Ivanov), whose affability is laced with a twinkly, uncaring menace. Alternately charming and threatening Roman, Samir is preparing to take over from the old ‘Godfather’ – Roman’s defunct granddad – and needs Roman to leave everything as it is. In other words, no land sale. During one of the least appetising barbecues there’s a bit of local colour as two of Samir’s henchman have a bout of country wrestling and a lot is spoken about the ways of the country.

This is the second film in the Un Certain Regard strand to be heavily influenced by the Coen Brothers’ No Country for Old Men, but whereas David Mackenzie’s Hell or High Water very much became its own thing, Mirică’s thriller – if not straight-out derivative – feels a bit too beholden to its influences. The foot at the beginning matches the ear in David Lynch’s Blue Velvet; the ending is too closely modelled on the oeuvre of the aforementioned Coen brothers and there are whole stretches that share both cast members and the mood of Corneliu Porumboiu’s Police, Adjective. Visually arresting and well-acted, Dogs shows promise but one would have hoped for some new tricks.