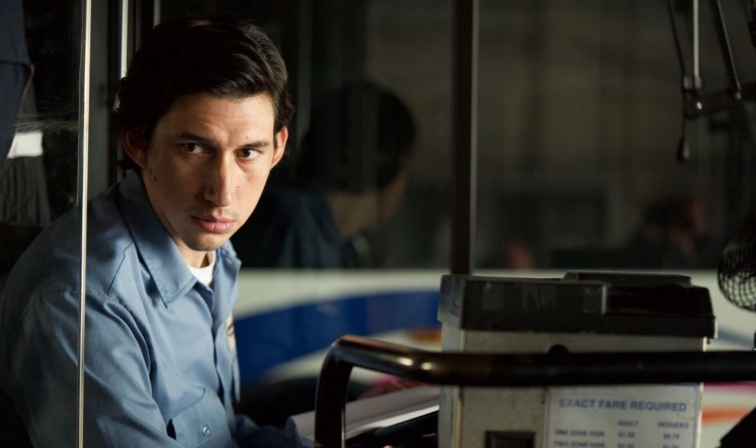 “No ideas but in things” wrote William Carlos Williams, the patron saint of Jim Jarmusch’s sumptuous sonnet to poetry and ordinariness, Paterson. The film presents us with a week in the life of bus driver and lunchtime poet Paterson (Adam Driver). In many way, Paterson’s life is idyllic. He is deeply, almost boyishly in love with his wife Laura (Golshifteh Farahani); his work, given he’s a bus driver, is remarkably stress-free and gives him plenty of time to think. Like Frank O’Hara, he writes his poetry in his breaks and before his shift. Sure enough we glimpse O’Hara’s Lunch Poems anthology in the driver’s cab.

Once work is over, Paterson returns to his domestic bliss which is potentially compromised by Laura’s latest craze. However, what begins as affectionate mockery of her creative fads – she’s constantly redecorating with her own distinctive style and wants to open a bakery or become a Country and Western star – but the fact of the matter is she is very talented, totally supportive of his work, and in her own way is creating a poem of their life together. His routine also includes walking his hated bulldog Marvin who has to be a shoe-in for the annual Palme Dog as far as his local bar where he sits and drinks a beer with a philosophical barkeep Doc (Barry Shabaka Henley) who pins a tableaux of local heroes behind the bar.

Of course, most of this smacks of wish-fulfilment – and the idea of the hidden village within the city recalls Paul Auster and Wayne Wang’s Smoke – but it’s a timely antidote to the kind of pumped up misery that is usually paraded as authenticity itself (see American Honey). While walking the dog, Paterson is stopped by a car full of gang bangers, but what initially begins as a threatening encounter soon turns into some helpful advice about dog security. All his encounters and his eavesdropping reveal a surprisingly nice world in which construction workers talk timidly of girls they don’t have the courage to make a move on, a discussion of the history of a local anarchist by two young students and a Japanese tourist (Masatoshi Nagase) who celebrates poetry and rekindles Paterson’s gift.

The whole set-up risks being all too winsome, but Jarmusch has always been a quiet punk: his most radical assertion is believing, despite everything, in the essential goodness of people. The neighbourhood of Paterson, New Jersey is also rendered as a place that through repetition we get to know. Paterson’s walk to work and his route trace the limits of his universe even as his poetry explores further – first muttered haltingly as he scribbles and then spoken without embarrassment as it appear on the screen. The love of poetry and art in general can be seen throughout the film, from Laura’s scattering of projects to Paterson’s little cubby hole where his bookshelves and notebooks have the whiff of the monk’s quarters.

There’s a shot of Paterson holding a book of William Carlos Williams’ poetry which is so sensual and tactile – the heft of the book in the hand, the feel of the paper cover – it will make any lover of books toss their e-readers in the bin. Drama does show up, but Jarmusch wisely sidesteps it. Marvin the bulldog is as bad an enemy as Paterson has to face and he’s adorable. In its optimism and good-heartedness, Paterson is a counterpoint to Taxi Driver which is visually quoted throughout. Whereas Travis Bickle was locked in a private hell intermittently shared by his individual customers, Paterson the bus driver is part of a community service, part of his town: as familiar as the street lighting and as illuminating and necessary.