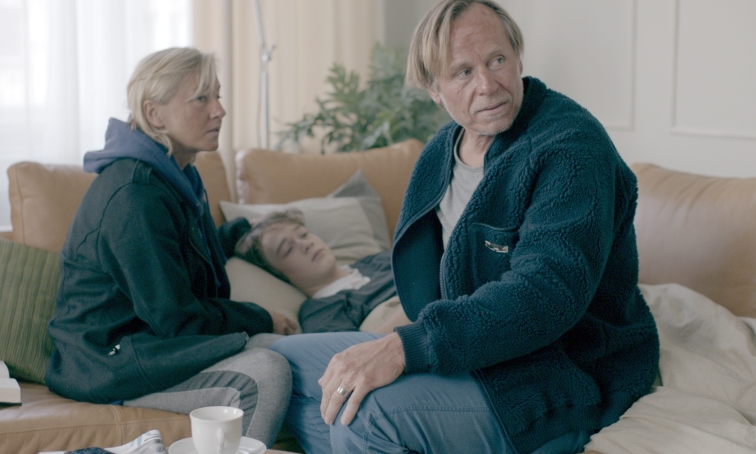 Don’t be fooled by the banal title – there’s a great deal of interest beneath the pastel hues and fine furnishings of Slovenian director Olmo Omerzu’s Family Film. Indeed, the title itself is the first of many sardonic misdirections in a piece whose screenplay delights in about-turns and ratcheting melodrama while elegant camerawork and committed performances lend even the most outlandish events an air of unlikely authenticity.

Cut from cloth not too dissimilar to Ruben Östlund’s widely-praised Force Majeure, this is a more tonally restrained work but equally puckish with regard to the traditions of the family unit. Igor (Karel Roden) and Irena (Vanda Hybnerová) are jetting off for a carefree sailing trip around the Indian Ocean for several weeks. Their parenting style is a swipe at affluent liberalism, leaving their two teenagers Anna (Jenovéfa Boková) and Erik (Daniel Kadlec) with funds and freedom because they are confident in the level-headed progeny they’ve raised.

Skype conversations home from the deck of their yacht are conducted in the semi-nude and even after it transpires that Erik has skipped weeks of school, Igor’s indignant response is that “We trust our children.” Erik is being led astray by the Anna’s best friend, Kristýna (Eliska Krenková) who is one part arch-seductress and one part sulky immaturity. The exploitation of their emancipated living situation seems to be the crux of the narrative until the action cuts to the family’s border collie, Otto (Flek). Otto was on the boat with Igor and Irena and now paddles desperately for shore amid roiling waves – reminding painfully of a similar sequence in Jonathan Glazer’s Under the Skin – but his owners are, unnervingly, nowhere in sight.

This is where the narrative begins to twist and turn, with the most beguiling element being Otto’s struggle for survival on a desert island, akin to Cast Away. Otto is devastated by his apparent abandonment, in one scene giving what is quite possibly the single greatest moment of canine performance in film. Far more than a charming aside, though, this pooch’s personal odyssey has a significant symbolism with his family cut so mercilessly adrift.

Recriminations fly and parental negligence begins to take on profound and permanent connotations. The reality of an ostensibly happy family is meticulously deconstructed within the confines of their comfortable middle-class home while their pet (or should that be ‘spirit animal’?) shelters from driving rain in a far off land. Krenková is probably Flek’s biggest competition in the performance stakes – she’s easily the most charismatic of the young actors and her nonchalant smile rules the film’s first half – but in reality, Kristýna’s teenage games are just the amuse-bouche to an engrossing and piercing examination of family dysfunction and redoubtable doggie resilience.