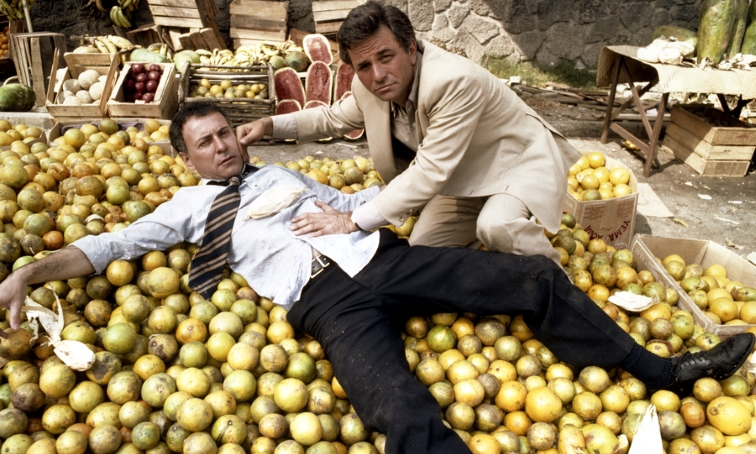 Alan Arkin and Peter Falk send up their dramatic personae to great effect in Arthur Hiller’s 1979 The In-Laws, a wonderfully balanced and often hilarious comedy that benefits from the formidable talents of its leads. Sheldon Kornpett (Arkin) is a successful dentist excited about his daughter’s impending wedding. Little does he know that the father of the groom (Falk), is waist-deep in organised crime, having recently pulled off the heist of the century. Invariably, Sheldon quickly becomes tied up with his new in-law Vince’s nefarious dealings, forcing the pair to go on the lam in Honduras and attempt to hawk Vince’s stolen US Mint imprints to loopy military dictator General Garcia (Richard Libertini).

It’s a pretty silly premise, and as the plot lurches towards The In-Laws‘ ludicrous conclusion, Arkin and Falk sell it with a charming chemistry that would seem effortless were it not so rare. Arkin’s deadpan tone is a perfect fit for the ever-so-slightly unhinged quality that Falk brings with him, with Arkin’s exacerbation matched only by Falk’s unflappable sense that his insane plan is definitely a good idea. Moreover, the pacing of the film – so often a problem for comedies – is such that it succeeds in treading a path towards Mel Brooks-esque absurdity without ever feeling tonally askew.

The film is especially notable compared to the similarly-themed Analyze This as well as the poorly- received In-Laws remake in 2003, the workmanlike cinematography of both failing to capitalise on their crime-centric gimmicks. In contrast, The In-Laws 1979 is shot not like a comedy, but as a crime film, all rattling fire escapes, cracked sidewalks and steaming manhole covers. Much like the blue-collar New York sensibility that grounds the supernatural silliness of Ivan Reitman’s Ghostbusters, class conflict and the gap between comfortable suburbia and urban grime brings an interesting aesthetic dimension to The In-Laws.

It’s a pity that this dimension is eventually dropped in favour of the mad-cap antics of the film’s final act, but Arkin’s wide-eyed incredulity offers a lifeline to the audience, pulling us through the most absurd of moments. In the hotel and taxi sequences, Arkin and Falk surprise us with their skill for physical comedy, first by tussling on the lobby carpet, and later, when Vince is ambushed by thieves, hanging from the roof of a speeding taxi. This scene is doubly satisfying in that it demonstrates Sheldon’s reluctant affection for Vince, and a sense of obligation to his companion. It’s a well-worn trope, admittedly, but in not being oversold is surprisingly effective. The In-Laws, while not quite a classic is a terrifically inventive and consistently funny comedy, with an oft-imitated but rarely matched star chemistry.