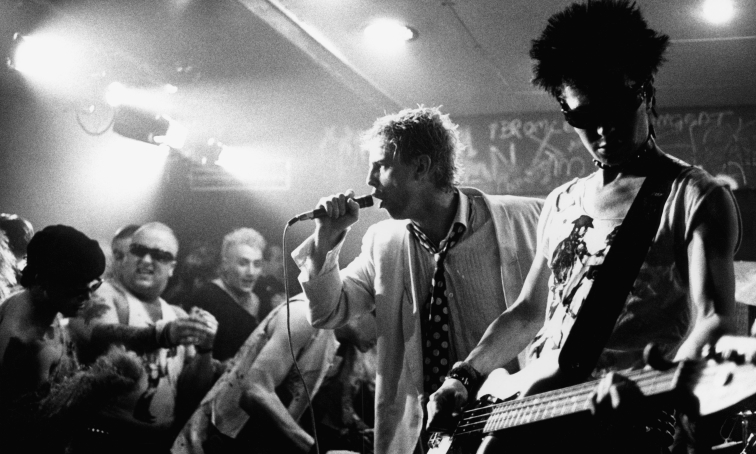 Kicking, screaming, swearing and drunkenly staggering his way to centre stage in pulsing, combative bio-drama Sid and Nancy is one of the punk movement’s most vulgar, deplorable and magnetic shining lights. The Sex Pistols’ so-called bassist, Sid Vicious, was a tortured soul who burned with violent intensity that repelled, frightened, confused and attracted those around him in bewildering fashion. The now venerable Gary Oldman, making just his second big screen appearance, fully embodies the maniacal rocker.

Having pipped another little known up-and-comer to the role (Daniel Day-Lewis), clad in leather under a birds nest of jagged jet black hair, Oldman’s performance is truly mesmerising. Peering feverishly through deranged eyes, barely in control of a body ravaged by self-imposed abuse, his turn encapsulates a tempestuous life that would be extinguished by heroine at just 21 years of age. In that time he met and fell desperately, terrifyingly in love with his bull-in-a-china-shop equal and muse, Nancy Spungen. American actress Chloe Webb more than matches her cockney counterpart, possessed as she is with a howitzer of a scream and fiery temperament which repeatedly ignites a vulnerable tinder box. The appearance of Courtney Love, who had aimed for the lead role, as Nancy’s friend Gretchen, further blurs the lines between fiction and reality, tinging the film with a retrospective sadness given what would later transpire in her own life.

The exultant peaks and cavernous troughs of Sid and Nancy’s polarised relationship causes rifts elsewhere, his romantic distraction and unhinged behaviour creating a rift in band dynamics: “Sidney is a fabulous disaster. A symbol. A metaphor. He’s a fucking star.” says manager Malcolm (an underused David Hayman). The madness is all well and good in the opening half; it is hard to draw eyes and ears away from the extreme profanity and debauched behaviour but moving towards the final act we cry out for more than two junkies ambling from one score to the next or sitting semi-conscious in a grim hotel room. Recalibrated by the peerless eye of cinematographer Roger Deakins for a re-release as part of Punk London’s 40th anniversary celebration, Sid and Nancy rages with a vitriolic fury which eventually becomes tiresome.

Cox intermittently inserts contemplative, nightmarish sequences to build a surrealist layer on top of the otherwise gritty, and incessantly grotty, vision of Sid and Nancy’s descent into drug-fuelled purgatory and Deakins achieves a number of striking, lasting images. But it is ironically telling that at several junctures throughout its arduous runtime characters refer to a sense of boredom. It is a pity that this unguided malaise and insatiable ennui pervades the film as it becomes increasingly difficult to sympathise with or relate to its destructive leads. No doubt an accurate depiction, there is so little tenderness to even the love story that it becomes a battle to retain interest as we return to the bloody demise at New York’s Chelsea Hotel that bookends the film. Vicious’ place at the drug-addled vanguard of a social and cultural change is forever preserved in musical folklore, but like his all too brief stay on this plain, it’s to be endured, not enjoyed.