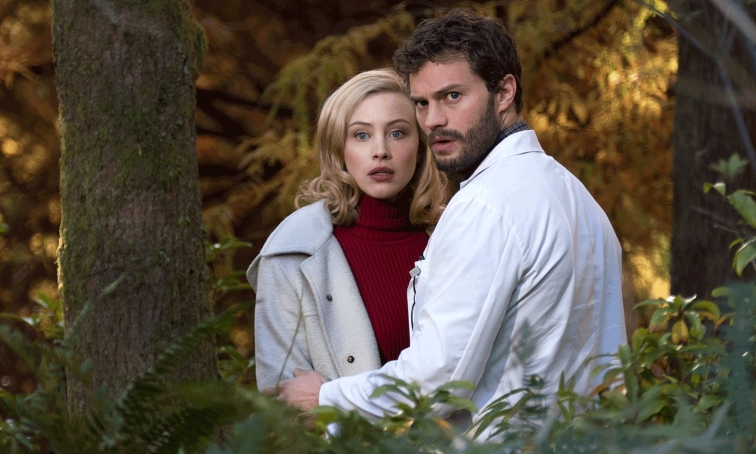 Perhaps the most uniquely disheartening cinema-going experience is when you enjoy the film you’ve watched (there’s a good story, a good cast and so forth), but you can see all the exciting directions it could have explored, yet failed to pursue. Such is the case with the enticingly titled The 9th Life of Louis Drax. The film brings up some interesting ideas: what technology exists to channel a person in a comatose state? Is it nature or nurture that shapes a child’s personality? But while Louis Drax is stylish, chilly and presents an inviting puzzle for viewers to piece together, is it enough to keep us drawn in?

It follows a young boy, Louis (Aiden Longworth), living in Seattle who falls off a cliff in the Puget Sound on his 9th birthday under mysterious circumstances. These circumstances bring his mother (Sarah Gadon) and doctor (Jamie Dornan) together to not only monitor Louis’ condition, but to discover what happened to him. Through Dr. Pascal we see that Louis’ life is a complex one; a young boy deeply affected by his parents’ broken marriage and the oddly close maternal relationship. He displays sociopathic tendencies but the jury is out on whether he is just a troubled boy or a bad seed. Through Louis, we get flashbacks into a fraught home life and see that his father (Aaron Paul), painted as a bad guy by the adults, is simply a man trying to do the best for his son.

His mother, on the other hand, leans toward the femme fatale end of the spectrum, soon causing trouble and raising suspicion in relationships with both Pascal and Louis. Does she have a hand in Louis’ fatal fall? The plot is easy enough to untangle: Who pushed the young boy over a cliff and how can we better understand why this happened? Yet Louis Drax constantly walks the tightrope of being a great supernatural thriller and by-the-numbers mystery. Max Minghella’s script, in combination with Alexandre Aja’s (Horns, The Hills Have Eyes) direction, borders on the dark and foreboding. But when the film moves towards a supernatural level (Louis can communicate with Pascal telepathically) and it finally feels like the director will add something new to staid genre twists, there’s a hesitation.

Minghella and Aja quickly back away from the supernatural, preferring to stick to what’s rote. The French filmmaker’s previous projects indicate he’s comfortable mixing the macabre and quotidian, so Louis Drax‘s failure to really sink into it’s weirdness feels somewhat unsatisfying. That said, the performances here are strong. Newcomer Longworth is compelling as the troubled Louis. Gadon, Dornan and Paul deliver in spades and help to keep this film glued together. While the world these characters inhabit is a troubled and dark one, they all work together to form an enticing emotional core that makes Louis Drax well worth taking the plunge. There’s plenty of mystery here to untangle and more than enough to leave you contemplating a complicated life.