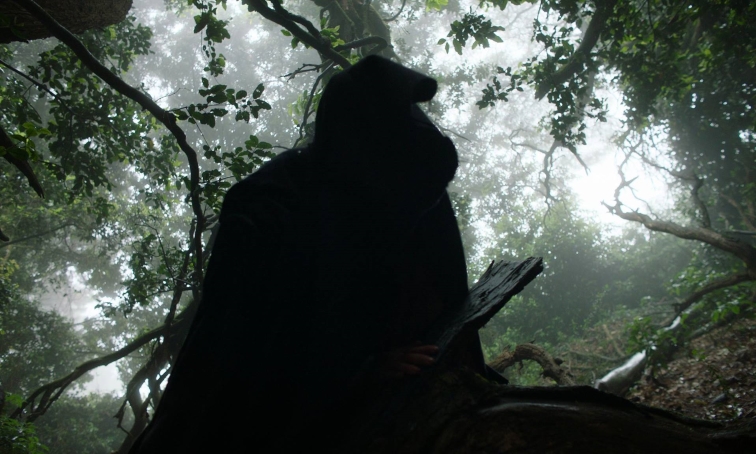 On the colour wheel, Craig Anderson’s Red Christmas is more Bob Clark’s Black Christmas than Michael Curtiz’s White Christmas. While it’s tempting to bring them together as a Yuletide triptych, a ‘Three Colours Christmas’ triple-bill (Krzysztof Kieślowski missed a trick with that one), Anderson’s comic slasher doesn’t quite earn its wings as a potential future classic, nevertheless it’s very funny and another welcome indicator that antipodean genre cinema is where it’s at right now.

Genre icon Dee Wallace (The Hills Have Eyes, E.T., Cujo) is an American mother living Down Under. She’s got the clan together for Christmas Day, including three daughters, one adopted, and her brother Joe. It’s a typical family gathering until there’s a knock at the door and a hooded figure reeking of piss enters unannounced. The set-up is a bit that the sketch towards the glitzy and literally heavenly finale of Monty Python’s The Meaning of Life, where Death upends a social gathering. Red Christmas is stylishly made and photographically colourful but it’s the cast, all uniformly excellent, who anchor the material and make sure the story works as well as it does. In a short space of screen time, via their bickering and various dynamics, they come across not only as likable but also believable. When the killer turns up to cause havoc, the film is genuinely gripping and emotionally engaging.

This is especially true of Shakespeare-quoting Jerry (Gerard Odwyer) who at one point begins to ask searching questions about his mother, a saintly woman now tainted by a past decision which some in society deem evil. Putting a scorching hot topic – abortion – at centre stage on arguably the holiest day in the Christian calendar also brings with it all kinds of amusing subversive intent and symbolism. Another ace up the film’s sleeve is the killer. Rather than a terrifying Michael Myers type tinged with supernatural abilities, Cletus (Sam Campbell) is a hooded freak who looks like Sloth from The Goonies and talks like John Hurt as Joseph Merrick in David Lynch’s The Elephant Man. His vulnerability is touching and makes the family’s reaction to his presence thematically murky and complex.

FrightFest 2016 runs from 25-29 August at Vue Shepherd’s Bush. For info and tickets: frightfest.co.uk