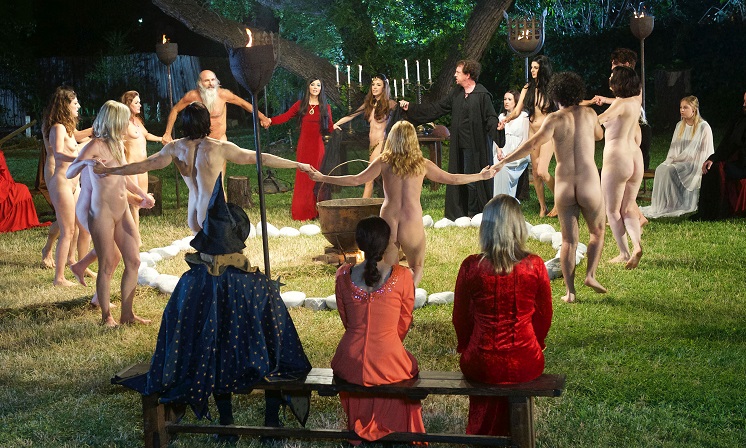 Anna Biller’s The Love Witch is a movie aesthetes of kitsch will embrace with open arms. Not that the film’s distinct look is mere window-dressing or getting by on camp charm alone. A political work of true authorship if ever there was one, Biller not only directed, she wrote the screenplay, she’s the film’s editor, its set decorator, served as the costume and production designer, and also found time to compose the music. All of it a striking success.

Samantha Robinson (who looks like giallo icon Edwige Fenech) is Elaine, a narcissistic young witch. Her new aim in life is to cut out all the hard work in relationships and make them perfect, so she won’t ever be rejected again. On the hunt for Mr. Right, her philosophical outlook is a melange of staunch feminism – she wants control (not an unfair demand) – but the methods are anti-feminist and more like that of a serial killer’s (entrapment, enslaving, murdering). She’s been schooled by a coven, one run by a man, to get what she wants, not with a winning personality but by deceptive means. Yet enchantress and seductress Elaine elicits much sympathy, despite her terrible deeds. A bit of a Stepford wife, objectifying herself to please dudes, she also wrongly believes she’s got male psychology licked. Coming on strongly – she is, after all, a swell-looking babe – and then slipping them a Mickey Finn, the unsuspecting victim – who thinks his porno fantasy has just come true – is about to experience sensations too much for him to handle. All of a sudden, Elaine is the centre of their universe. There is only Elaine. She is the be all and end all. But next day, she wakes up disappointed. Her victims are so loved-up they get sick, complain a lot, thus reflecting the oft-repeated notion all men require a whore in the bedroom and a nurse and cook in other domestic matters. Their cry-baby weakness appalls her, and they subsequently die.

Biller’s film is not only very funny – aided by performances straight out of a sitcom or soap opera – it’s something of a morality tale and most definitely a tragedy. When Elaine thinks she’s found Mr. Right – this time for real – her world and previous actions have consequences. More of an art movie than a horror one, it will no doubt find an appreciative audience looking for something a bit different. Biller is an eccentric talent – always a plus in the world of film – and The Love Witch is a triumph of form and style. M. David Mullen’s colourful cinematography is just dandy too, but it’s the total vision up there on the screen, all of it Biller’s, which impresses so much.

FrightFest 2016 runs from 25-29 August at Vue Shepherd’s Bush. For info and tickets: frightfest.co.uk