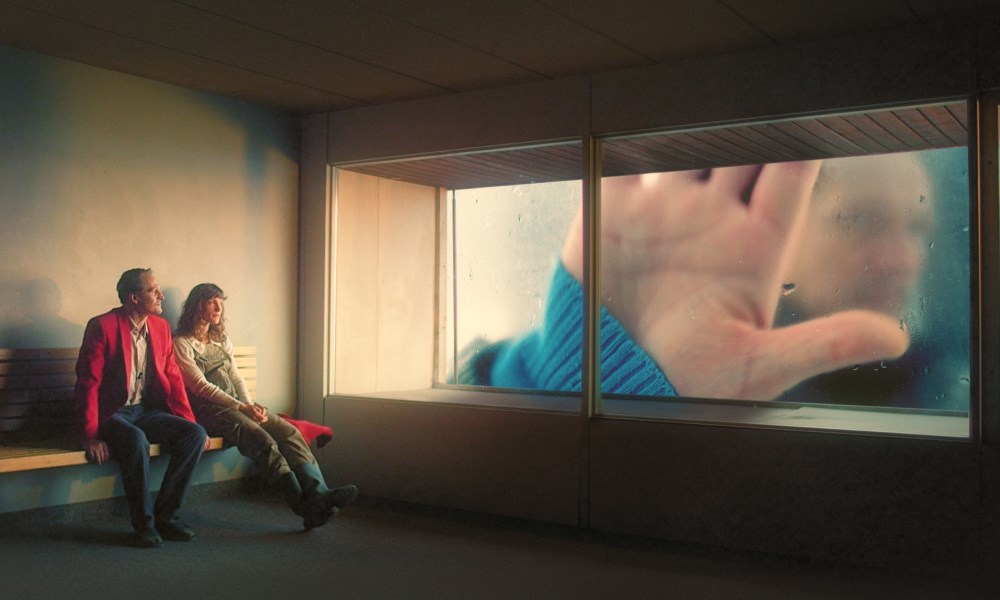 Convention dictates that relationship dramas are, at their core, about the connection between two people. Although Tobias Nölle’s Aloys ostensibly adheres to this formula, it spends more time probing a far more interesting and unorthodox relationship; that between a person and their physical surrounds. Before a single individual appears on screen, Simon Guy Fusser’s expansive photography explores a flat, empty void. A kitchen tap left running and a discarded video camera on the floor in an otherwise bare room suggest the withdrawal of prior occupation and the sequence evokes something approaching grief and abandonment.

When the eponymous Aloys (Georg Friedrich) does appear, he is equally bereft and he is framed within this same environmental context in a poetic concord of urban and psychological portraiture. Audiences are used to seeing loneliness manifested thorough visual compositions, but the images that convey Aloys’ situation are far more than, for instance, the long-shot of the girl swimming in the sea at the opening of Jaws. Nölle is as interested in his protagonist’s emotional isolation as his literal solitude. Shots are not just wide angle to create space around Aloys, they’re tableaux akin to Roy Andersson but with only one figure consumed by absence, from a high-angle long shot across a misty park, to the desolate interior of a bus or even a car.

As Aloys sucks the air from a Capri-sun the tightening foil seems to silently mock him as he sits in a forlorn state that suggests a mid-point between snobbish and depressed. “I’m imagining you with your blue jumper an your sad eyes,” reprimands a mysterious voice at the other end of the phone line. While in a drunken stupor grieving his recently deceased father (who was also his partner in a private detective firm) she steals his video camera and DV tapes. With her insider knowledge she goads his life of observation and passivity. Aloys might pay close attention to the world around him, but his interaction with it is painfully negligible – he leaves his camera looking through the peep hole in his front door rather than answering it and risking a conversation. How this mysterious woman manages to break through to Aloys is through the environment that he painstakingly observes.

A game begins in which aural cues transport him to new places; space and time shift and the two eventually begin a fantastical imagined relationship via phone calls. It’s telling though that even with human contact offered, Aloys falls backs on the his immediate surroundings, guiding her mind through his apartment as an excuse to converse. Terrific sound design complements a palette of icy sterility and dated and decrepit suburbs. There remains a chill in the numerous scenes that involve the nature world as, even when Aloys makes a connection, it’s dislocated in space. Like some temporal anomaly in search of human contact.