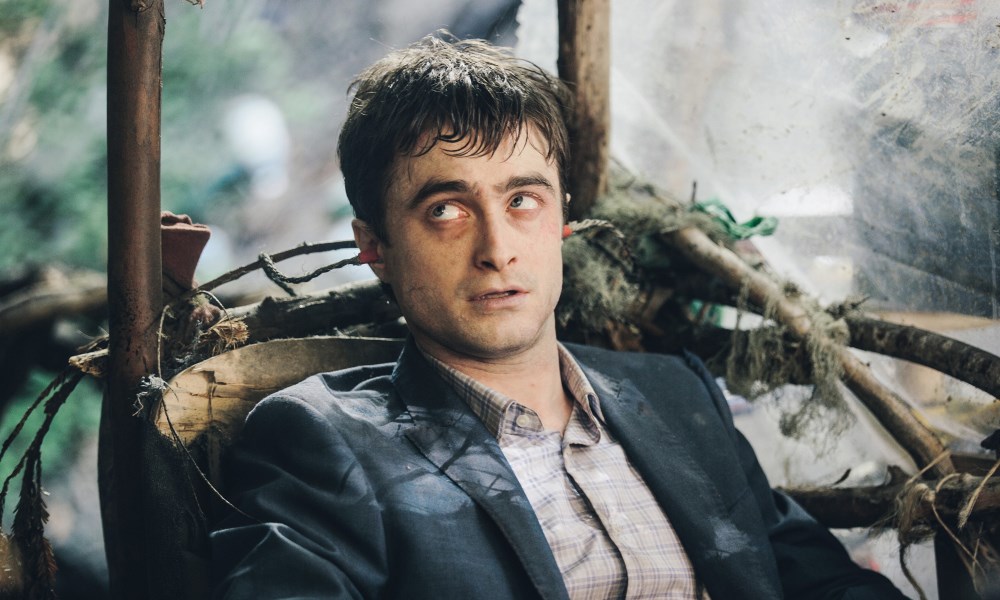 How far can a fart joke get you? That’s the question posed by Sundance offering Swiss Army Man. The answer is surprisingly far, but ultimately it’s going to start to go stale at some point. Viral video artists Daniel Scheinert and Daniel Kwan’s debut feature is a loopy comedy of visual inventiveness which has all the makings of a cult classic though for many it will run out of wind long before the credits roll. Paul Dano plays Hank, a castaway on an apparently deserted island whose sheer boredom leads him to attempt suicide. He’s interrupted by the arrival of Manny (Daniel Radcliffe), a washed-up, posthumous whoopee-cushion whose powerful flatulence allows Hank to use the corpse as a cadaverous jet ski.

On escaping the barren island and reaching lusher land, Hank gratefully lugs the lifesaving corpse into the forest, where one night in a cave Manny recovers the power of speech, giving Hank the Wilson-like companionship he obviously longs for. Added to this, we find out that Manny has a bunch of useful applications: a water dispenser, a compass, a makeshift hatchet among them. With his scraggly beard, Dano resembles the “It’s…” man who introduced the title sequences of the Monty Python TV shows and there is something Pythonesque in the comedy, the silliness wedded to philosophical musing and the Terry Gilliam-inspired visuals. As Manny knows nothing of life, he is a holy fool questioning everything and having to be patiently tutored by Hank, whose own grasp on reality seems fairly weak.

This section suffers from its faux naïve straightforwardness. “What is life?” Manny asks and you can almost hear the ‘existential box’ being firmly ticked. Things get mawkish when Hank decides to work out some of his issues, including an infatuation with Susan (Mary Elizabeth Winstead), a girl he’s spied (stalked?) on a bus and the pair enact an extension of the relationship. There’s also something about fathers in here, but the more Swiss Army Man tries to be multi-functional, the more bum notes it sounds. Charlie Kaufman and Spike Jonze at their best wed this kind of cinematic magical realism with low-fi slacker concerns, but the Daniels all too quickly resort to musical sequences, scored by Andy Hull and Robert Mcdowell, as a placeholder for where the emotion is supposed to go.

The leads do their best to make the material work and much of the humour comes from their performances, even though Radcliffe never quite escapes the feeling that he’s trying too hard. Not since Sean Connery tore his wig off and donned his Zardoz onesie has an actor tried so enthusiastically to distance himself from his fictional alter-ego. Almost every post-Potter movie role could be billed as ‘Daniel Radcliffe is NOT a boy wizard in…’ For the most part Swiss Army Man is a visually unique gas and only feels bloated when it tries to hitch its wayward originality to some sort of real world application.