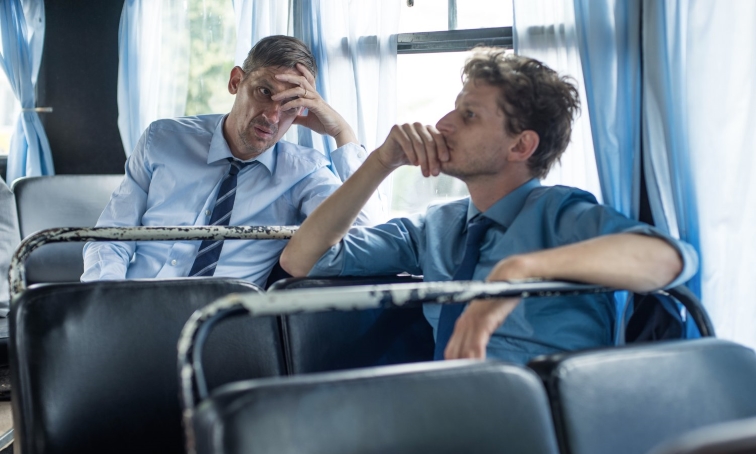 Scottish filmmaker Duncan Lloyd (Pieter van der Houwen) has been tasked with the seemingly impossible job of making a documentary on the Belgian monach King Nicolas III (Peter van der Begin), entitled Our King, intended to improve the king’s bumbling image. In fact, there’s something of our own future king Charles III in the lanky regent’s nice-but-dimness. Disaster strikes however when, on a diplomatic visit to Turkey, Nicolas issues a proclamation called “We’re fed up” and declares independence. “”Why split a peanut?”, Lloyd laconically comments.

Matters are further complicated by a cosmic storm that has grounded all air travel. Desperate to return to his country and comes to grips with the crisis, King Nicolas must first evade the Turkish security escort which is determined to keep him in the country. With his immediate entourage, diplomat and chief advisor, Ludovic Moreau (Bruno Georis), media coordinator Louise (Lucie Debay) and the valet Carlos (Titus de Voogdt), the king embarks on an improvised escape, which will take them all into the Balkans, heading for home. Writers and directors Peter Brosens and Jessica Woodworth were in Venice in 2012 with The Fifth Season, a criminally neglected environmental disaster movie of real depth.

King of the Belgians is a much slighter affair. It is a mockumentary and partly an anthropological study. A yoghurt festival is visited, a town with a bare-foot mayor and a drunken night with a former sniper in Serbia. There’s some Some Like It Hot-style cross-dressing and more than a little of Roman Holiday as King Nicolas gradually changes from stuffed shirt puppet to a more mature character who enjoys finally getting to make choices. Although instead of riding a Vespa through Rome with Gregory Peck, he drives an ambulance through Bulgaria and promptly crashes it.

The other characters grow a lot less – Louise, for instance, is a tired to the point of exhaustion career-woman cliché from the 1980s – and Duncan’s incessant voiceover, although in keeping with the idea of the documentary, grates at times. Post-Brexit, King of the Belgians is a timely meditation on the nature of Europe as seen from without. The idea of dissolution is ever present but there is a deeper philosophical yearning for a ‘happiness without ifs’ as the barefoot mayor puts it. With lightness of touch and occasional flashes of real insight, King of the Belgians makes for an entertaining watch.