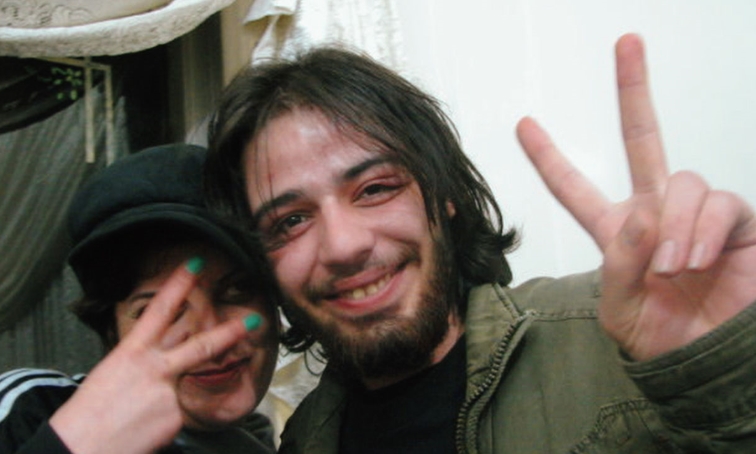 There are seven stages to grief, we’re told, from denial to acceptance. Andreas Dalsgaard and Obaidah Zytoon’s The War Show is structured with a similar seven stage process, but here the grief is not for a single individual but for a whole population, a nation who have suffered incredible violence and many who have inflicted that violence on others. Zytoon was a radio journalist, playing her rock and roll playlist and commenting on the world from her radio studio. With the protests spreading from the Arab Spring and inspiring Syria, she joins the men and women, but mainly women, in the street, both to protest and to record and video what was taking place.

The result is an intimate, complex and raw vision of life from within a horrific civil war, which is still ongoing and the results of which are likely to last decades. Initially, there is euphoria as regimes elsewhere topple and the regime itself struggles with the unexpected fervor of the popular protests. A disparate group of young people form the cadre of the protestors. There is the young woman Lulu who takes of her Hijab for the first time. Her boyfriend Hisham isn’t that interested in politics, but is swept along in the wake of her enthusiasm. Argha is a dental student who they hope in the future will give them discounts and a heavy metal doper Rabea has rebellion in his DNA. He hates the chanting of the protesters, saying that it’s the same rhythm as the chanting of the regime’s adherents. Houssam is another student with a great smile and a fondness for the herb.

None are ready for what is to happen and as you notice that many faces in the footage are blurred, presumably to protect them from murderous retaliation from the watchful regime, then the fact that we can see their faces becomes a signifier of terrible tragedy to come. Protest gives way to suppression and the state unleashes thugs onto the streets to beat up and abduct the protesters, while the state media films its own propaganda narrative of all is well. Throughout all this life goes on and a dog – Fifi – is adopted. Protest turns to war and Zytoon and her group of activists travel around the country to document the devastation and the humanitarian crisis as Assad and his cronies seek to starve and cut off any city that is part of the rebellion.

This is a war without bounds and the evidence of systemic war crime is increasingly obvious. Some of the footage is suitably difficult to watch but the unhelpful sticker of ‘war porn’ need not be applied here. Zytoon is a knowledgeable and sure guide through the stunning tragedy. She notes that one of the towns they visit, Zabadani, was the site of the first crime, when Cain slew Abel. She is also fully conscious of how the camera is not a hovering entity separate from the conflict, but is now part of the conflict, changing how people behave, how they fight and what they are prepared to do. One man fires at a helicopter, putting everyone in immediate danger, and one suspects he wouldn’t have bothered if he didn’t think he’d look like Rambo for the camera.

In other cases, a man strips off to display his wounds from torture, hoping for some affirmation, some proof of how he has been treated. As the war progressed, the friends themselves lose the faux immunity of observers and the tragedy is relentless. It’s very difficult to appraise The War Show critically, the very existence of which is testament to the bravery of the directors and her collaborators. Suffice to say then that this is an urgent and necessary witness to the humanitarian tragedy of our times and which is all too often viewed only through the Eurocentric lens of the ‘problem’ of refugees.