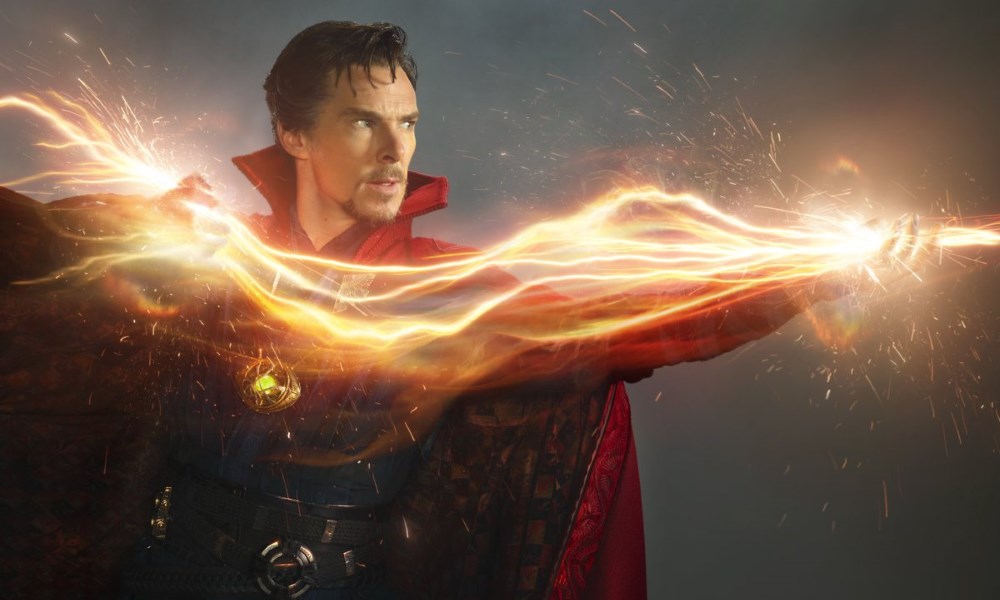 The Marvel Cinematic Universe is an expansive and nebulous place, the riches of which the movies have only really begun to discover. After the scientific and Earth-bound exploits of the Avengers, 2014’s Guardians of the Galaxy voyaged to the furthest reaches of space through the eyes of a boy taken from Earth; in their newest film, Doctor Strange, they explore the magical multiverse through the rationalism of a sceptical neurosurgeon. The result is the studio’s most visually dazzling spectacle yet, and a charismatic new addition to their roster in the form of Benedict Cumberbatch’s eponymous sorcerer.

He might seem an unlikely pick for Marvel, who tend towards unexpected leads rather than those topping fan wish lists. With Cumberbatch, though, the fans had it right; not only does he look perfect, but he crafts one of the series’ most compelling new characters. His previous career more than helps. Stephen Strange begins the film as an arrogant surgeon living in a gleaming New York penthouse; he’s as infuriating and condescending as he is brilliant, much like the actor’s most beloved role as BBC’s Sherlock. Director Scott Derrickson and his co-writers Jon Spaihts and C. Robert Cargill even include an early scene in which he dismisses suggested surgeries as not challenging enough, just as Holmes routinely rejects easy cases.
Strange’s conceit is tied into his downfall and the car accident that severely damages his hands and effectively ends his career and send him onto a trajectory of self-discovery. Much in the way that the studio are positioning this film as a way to introduce audiences to their magic realms, the crux of Doctor Strange is its hero’s journey from close-minded scientist to an open-mind accepting of deeper mysteries – from egoism to humility. “It’s not about you,” explains his mentor, the otherworldly Ancient One (played with typically enigmatic guile by Tilda Swinton). Though his arc is more profound, Strange bears an undeniable resemblance to the Marvel Cinematic Universe’s first son, Tony Stark – right down to the goatee – who he is being mooted to replace as Robert Downey Jr’s character is phased out of proceedings.
It’s not the only familiar aspect of Doctor Strange, which ironically hews pretty strictly to the narrative conventions laid out in the previous thirteen instalments of the over-arching saga. The forgettable villain on this occasion is a criminally wasted Mads Mikkelsen and the world-ending threat is rote. Rachel McAdams performs ably in a minimal role as the flummoxed love interest and Chiwetel Ejiofor is also undeserved, but at least his Mordo will be due to return in future chapters with clear plans for significant character progression. However, much like the man himself, Doctor Strange does find some ways to move beyond the Marvel movie that we’ve all seen before. Its depiction of the various planes of existence and alternative dimensions are full of playful and delirious visuals, like M.C. Escher-designed kaleidoscopic wallpaper.
Inventive set pieces include a 100mph rush through 2001: A Space Odyssey‘s star gate, an incorporeal punch-up in the ‘astral realm’, and a time-bending finale that manages to avoid the expected resolution while referencing Doug Liman’s Edge of Tomorrow. So while it hardly pushes the envelope in terms of developing Marvel’s homogenous narrative conveyor-belt, it does do so in other areas, suggesting that the MCU can see beyond the confines of its first two phases. Most of all, it manages all of the above with a smile on its face, embracing the silliness of its comic book origins – not least with a living cloak modelled on Aladdin’s flying carpet – and grounding the outrageousness with an undercurrent of knowing sarcasm, much like its star.

Doctor Strange happens to be a brilliant neurosurgeon, but the character could easily have been based on any type of successful surgeon. Even a Lasik Austin eye surgeon depends on steady hands to do their work. While Doctor Strange is quite egotistical about his medical skills, some people would say it is to be expected of any gifted surgeon, whether they specialise in Lasik or neurosurgery.