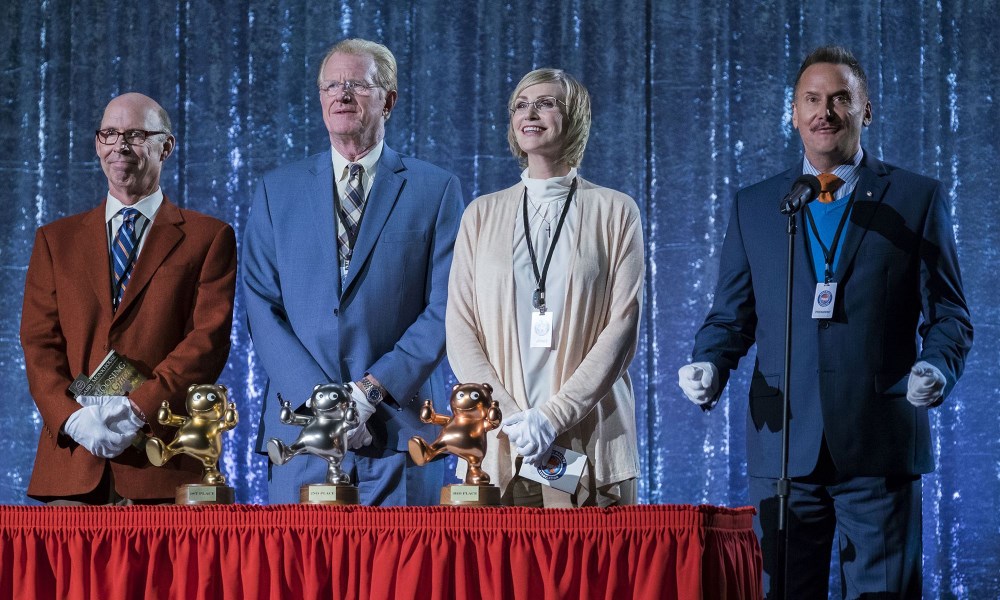 Watching Christopher Guest’s Mascots is a lot like meeting up with old friends you’ve not seen in years. It’s comfortable, the gang’s all there and the laughs come thick and fast, but you also can’t shake the nagging feeling that your relationships haven’t evolved with the people you’ve become. This is the fifth instalment in the Guest mockumentary ‘canon’ and it’s evidence that the format has now solidified into a template that needs refreshing, as much gentle enjoyment as it might bring.

At their best, films like A Mighty Wind and Best in Show found pathos amid the ribbing, Mascots is a comparably lightweight effort but good fun nonetheless. The premise itself is enough to raise a smile – a competition for amateur sports mascots to compete for the coveted Fluffies. It’s fertile ground for the Guest treatment, fitting his formula of a slow build-up to a contest where a group of tragically enthusiastic also-rans get to indulge their egos and compete for validation. Guest particularly finds his groove during the final show with (literal) toilet humour, sweet-natured slapstick and appropriate absurdity. Yet the jokes never get too far beneath the visual farce of people prancing around in furry costumes to probe with any real incision the idiosyncratic motivators for their dedication to their craft.

The ranks are filled with many of Guest’s regular troupe – including Parker Posey, Bob Balaban, Jane Lynch, John Michael Higgins, Ed Begley Jr., Jennifer Coolidge, and Don Lake – along with some new faces. Jim Piddock, who originally pitched the idea of a mascot documentary to Guest, takes over the co-writing responsibilities from the absent Eugene Levy who, along with Catherine O’Hara, Michael McKean and Harry Shearer are missed. Chris O’Dowd is good value as an Irish-Canadian firebrand and self-proclaimed “bad boy of sports mascottery” while Tom Bennett follows his scene-stealing performance in Whit Stillman’s Love & Friendship with his turn as Croydon football mascot Sid the Hedgehog.

Zach Woods and Sarah Barker are also amusing as a husband-and-wife team who grimace their way through the talking-heads interviews intent on denying their hate/hate nature of their marriage. The fact that Mascots is a Netflix Originals production possibly gives a useful indicator of how best to enjoy it. A cameo from Corky St. Clair reinforces this as an echo of former glories, but it’ll be an entertaining way to spend an evening in from of the television.