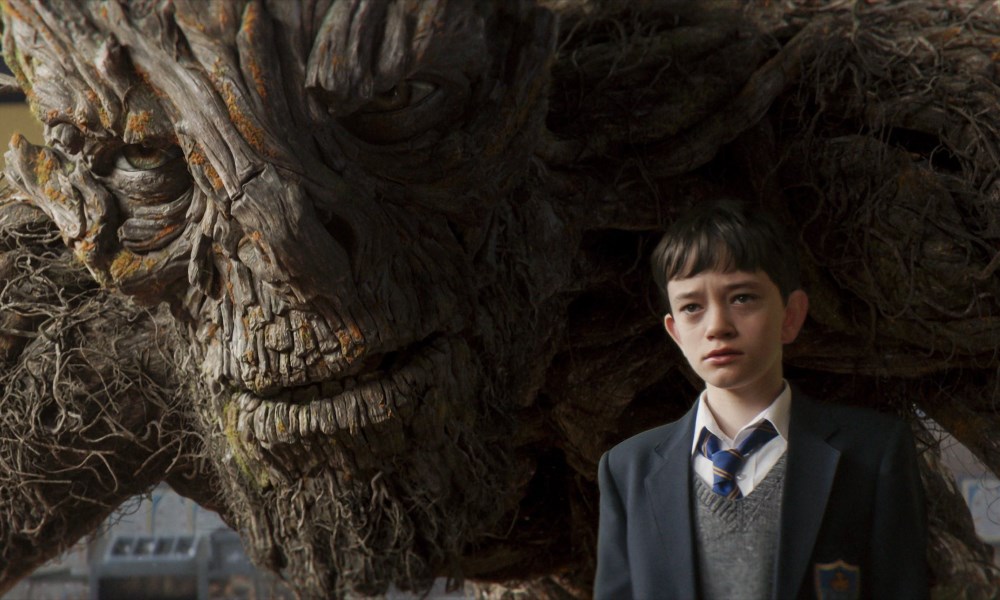 Speaking the truth no matter how difficult, rather than simply telling a loved one what they want to hear, is one of numerous life lessons at the very heart of A Monster Calls, an utterly heart-breaking return from J. A. Bayona, director of The Orphanage and The Impossible. Foremost in its intentions, perhaps, is learning how to be truthful to oneself. Over the tumultuous, fantastical and crushingly realist course of this tale of good, bad, and all that is both and in between, Conor (Lewis MacDougall) has to come to terms with the fact that his mother (Felicity Jones) is terminally ill with cancer.

In the opening moments of a startling turn from the young Edinburgh-born lad, making just his second appearance after last year’s Pan, he awakes from a terrible nightmare in which a graveyard crumbles into the earth and a hand slips from his grasp into the void. It is a desperate, breathless beginning extremely well realised by the film’s special effects team. So often employed to disguise a lack of depth elsewhere, the technical wizardry exhibited throughout A Monster Calls is complimented by Bayona’s assured direction and a tender script by Patrick Ness, here adapting his novel for the screen superbly.

Watercolour credits that mix, dissolve and blend will later be echoed when Conor is told three tales whose morals he must heed, sketched across his imagination and in multi- coloured splendour for a viewer. The flickering black and white image of King Kong flits in front of Conor’s eyes as he and his mum, whose greyed lips and dark eyes from the outset betray signs of severe ill-health, enjoy an early serene moment together. Introducing the notion of a beast, unexplained and misunderstood, it is just after the witching hour, when 12:06 clicks to 12:07, that the titular monster comes a-calling for the first time with petrifying gusto.

Rising from the earth of church grounds opposite Conor’s bedroom, a yew tree transforms into a towering creature, fearsome in size but with the gruff and yet affable tones of Liam Neeson. Initially frightening in his ferocity, the monster does not scare the plucky youngster, who is brave in the face of his overwhelming new pal and the awful circumstances he will teach him to face. MacDougall demonstrates a similar courageousness and fearlessness with a performance of such maturity that – certainly in the latter stages – buckets of tears will well in dazzled eyes. Conor is forced to face events no child should and the actor shows an understanding of complex emotion well beyond his tender years.

In spite of all the effects and action, Bayona’s use of silence is profoundly moving. Moments of quiet, some awkward, others emotional, between Conor and his overbearing grandmother (an excellent Sigourney Weaver), as well as hugs of longing and stares of resentment with an absent father (Toby Kebbell) speak volumes. Last but by no means least special mention must go to Felicity Jones. Confined through to her bed at home or in hospital throughout as her body slowly withers, she is a study in debilitated stillness. There is such love, compassion and profound sorrow in her sparkling eyes that words and movement almost seem obsolete. A tremendous performance from the British actress tops off a captivating, tear-jerking success.