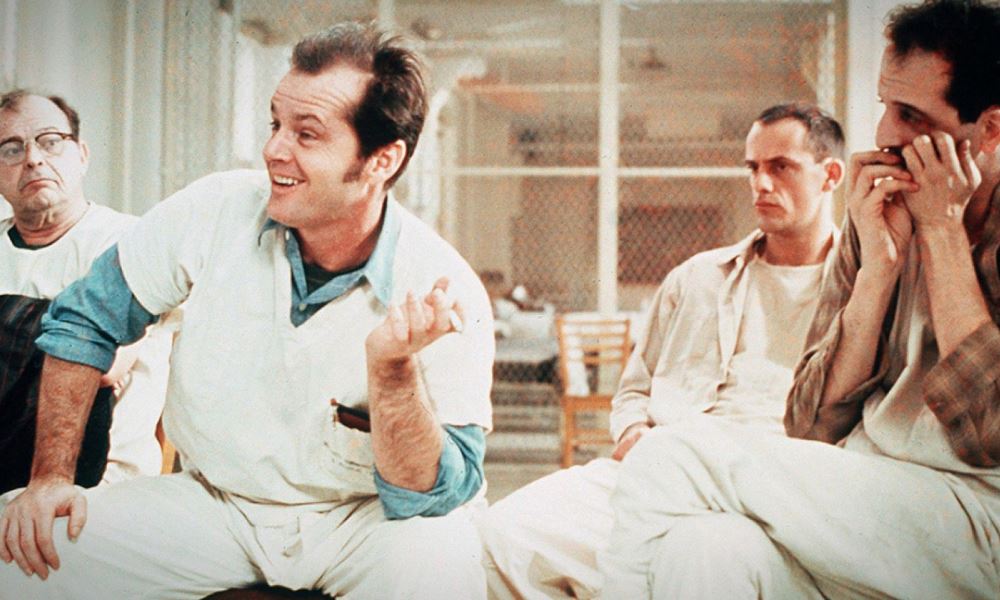 Its honest and forthright depiction of mental illness, combined with Nicholson’s tour-de-force bull in a china shop performance, means that it has lost none of its power to provoke and entertain in the four decades since its release. The film’s depiction of mental illness feels as radical today as ever. The plot revolves around Randle P. McMurphy (Nicholson), a troublemaker convicted of assault and rape who is transferred from prison to a mental hospital yet immediately suspected by the staff of fakery.

An energetic fellow, to say the least, McMurphy quickly befriends many of the patients and begins disrupting their regimented way of life, to the horror of the authoritarian Nurse Ratched (Louise Fletcher). Yet far more impressive than any kind of conventional narrative is Forman’s insistence on portraying the patients as active subjects capable of humour, love, creativity and rebellion.

This is reflected in the approach to producing the film itself, which was shot in an actual state mental institution (The Oregon State Hospital) and involved (both as consultants and performers) real doctors, nurses and patients. One Flew Over the Cuckoo’s Nest is at its utmost best during the many moments – including an illicit trip to sea, an impromptu basketball game and a baseball game on TV – where McMurphy and the boys are just having some good old-fashioned fun. Nicholson was at his artistic peak in 1975, having starred the same year in Antonioni’s The Passenger and the year before in Polanski’s Chinatown, and he is again fantastic.

McMurphy can only be described as a pure force of nature, a character almost beyond good and evil whose simple presence provokes excitement and controversy. At times diabolic (taunting Nurse Ratched) and sympathetic at others (in his touching friendship with the Native American Chief Bromden, played by Will Sampson) one never quite has him figured out. You can’t take your eyes off him, and yet despite his larger than life personality, Nicholson’s skill prevents the character from veering into exaggeration or parody. One Flew Over the Cuckoo’s Nest excels when it comes to the patients and McMurphy’s unusual relationship with them, but it is less admirable in its unsophisticated counter-cultural message and depiction of women.

McMurphy’s assault on the hospital’s rules as symbolic of a broader rebellion against societal norms feels trite and ultimately nonsensical; while there might often be good reasons to challenge the status quo, institutions set up to treat individuals for mental illness are arguably more justifiable than most. Meanwhile, the women in the film are either neurotic, killjoy dictators (Nurse Ratched) or absurdly empty-headed and promiscuous (Candy and Rose) as if nothing lies between. These faults aside, One Flew Over the Cuckoo’s Nest is an unfailingly original work of art that in most ways continues to live up to its formidable reputation.