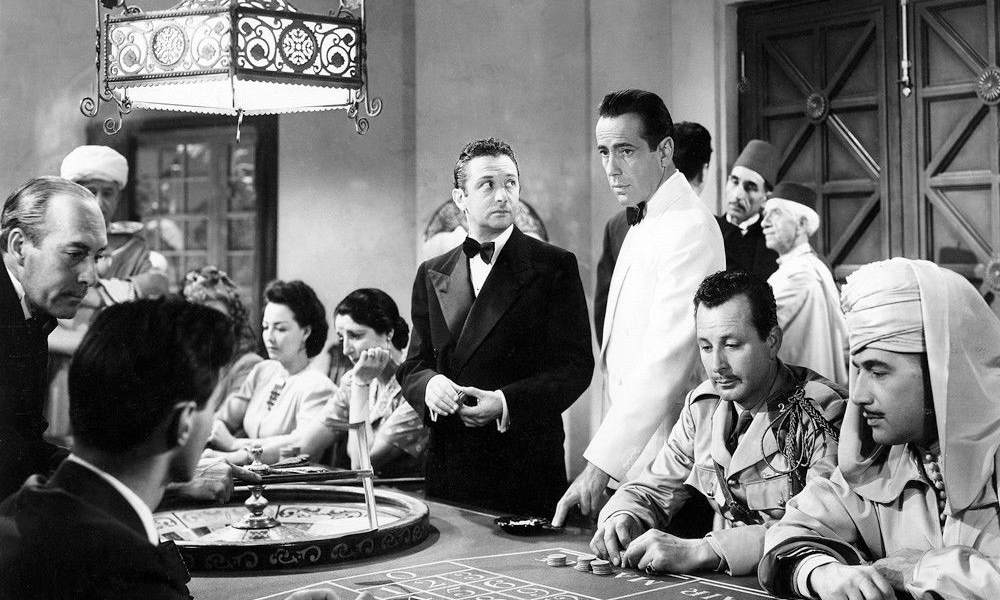 Diamonds Are Forever
Legendary secret agent James Bond can be seen carousing in casinos in many of his iconic movies. But perhaps the most famous casino-centric James Bond film is the 1971 movie Diamonds are Forever. In this movie, Bond can be seen playing a number of casino games, one of which is roulette. The movie’s roulette scene happens just prior to its famous craps scene, helping to set the atmosphere for one of the most exciting Bond films ever created.

Casablanca
1942’s Casablanca is considered by many to be one of the greatest movies ever made. One of its most famous scenes involves a roulette game which is played in the cafe owned by the movie’s protagonist, Rick. While trying to flee a corrupt investigator and make it to America, a woman and her husband gamble everything on a game of roulette. Rick, played by the legendary Humphrey Bogart, sets up the game to ensure that the couple wins on the number 22. The couple leaves with their money, and takes off for the freedom of America.

Dirty Rotten Scoundrels
The 1988 movie Dirty Rotten Scoundrels stars legends Steve Martin and Michael Caine. Martin and Caine, who play two con men, work together in order to score tens of thousands of dollars from French casinos. In one of the most memorable scenes of the movie, Martin’s and Caine’s characters play in a game of roulette against each other and others.

Indecent Proposal
While playing roulette can give you quite the rush, it can also get you into quite a bit of trouble if you’re not careful. Nothing proves that quite like the 1993 film Indecent Proposal. Starring Demi Moore, Woody Harrelson, and Robert Redford, this movie involves a newlywed couple who blew all of their money on a game of roulette. After losing their entire life savings, a billionaire offers the couple money provided that Moore’s character spends the night with him. The couple agrees to the proposal, spurring on a complex web of problems and events that permeate throughout the movie.

California Split
Starring Elliott Gould and George Segal, 1974’s California Split is a movie that’s entirely about gambling. So, it stands to reason that roulette shows up a time or two throughout the film. The film’s two main characters start to bond after they’re accused of colluding during a poker game. Together, they win more and more money playing craps, poker, and roulette. Eventually, Segal’s character grows weary of the lifestyle, and returns to his normal, run-of- the-mill life.

Croupier
The 1998 film Croupier stars Clive Owen as an amateur writer who makes a living as a casino croupier. In the midst of this profession, Owen’s character becomes closely acquainted with the gambling lifestyle, witnessing its highs, its lows, and everything in between. The positive for Owen’s character is that he is accumulating tons of great material to write about. Roulette is just one of the many games played throughout the movie; a movie that is equal parts exciting, depressing, and thought-provoking.

Run Lola Run
Released in 1998, German film Run Lola Run involves a woman who must gamble in order to make 100,000 marks before her boyfriend is killed by his cohort. The experimental film contains three separate endings, one of which involves the woman playing a game of roulette. After successfully winning the game, she collects 126,000 marks, and is able to save her boyfriend. However, after she’s won the money, she finds out that her boyfriend no longer needs it. Upon hearing this, the film ends abruptly.

The Deer Hunter
The famous roulette scene in 1978’s The Deer Hunter doesn’t take place at a roulette table. In fact, the scene has nothing to do with traditional roulette. So what does it have to do with? The most extreme form of roulette there is: Russian roulette. Captured by Vietnamese combatants, a group of American soldiers and friends are forced to pull the trigger of a gun that’s pointed at their heads. It’s one of the most intense movie scenes in cinema history.