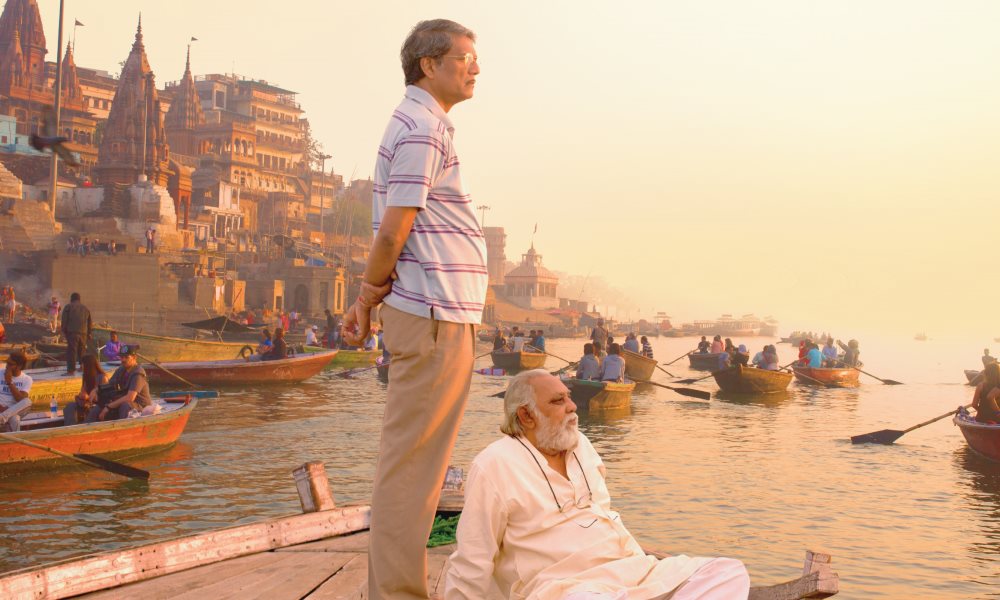 Set in Varanasi, Shubhashish Bhutiani’s remarkably assured debut feature, starring Lalit Behl and Adil Hussain, has already won plaudits and awards on the festival circuit. Shot when he was just 23, Hotel Salvation is a bittersweet meditation on life, death and salvation.

Haunted by a recurring dream, seventy-seven-year old Daya (Behl) is convinced it is time to die. Following tradition, he donates a cow to the temple, before persuading his stressed, overworked son Rajiv (Hussain), to accompany him to the holy city of Varanasi. Hindus believe that people who die there, after bathing in the River Ganges, escape the endless cycle of death and rebirth and achieve salvation. The pair check into ‘Mukti Bhawan’ (Hotel Salvation) where residents are offered just two weeks accommodation. At first Rajiv is beset by work calls and is desperate to return to the city. It is only his sense of filial duty to his father that keeps him there. While Daya accepts his impending death almost gleefully, Rajiv is torn between feelings of impotence, guilt and impatience. Slowly, though, father and son begin to enjoy each other’s company.

Daya embraces his new environment and makes friends with the other residents, in particular Vimla (Navnindra Behi) a kindly widow who has been there for years – the hotel manager changes the name in the register of any resident who lasts longer than a fortnight. The inhabitants live in simple rooms, complete with peeling walls and mice. They watch their favourite TV series, sing hymns together and freely discuss death and the best way to go. When one of their number passes away, they all participate in the funeral rituals, reciting mantras, shrouding and garlanding the corpse and finally cremating the deceased on the River Ganges.

Rajiv is clearly out of touch with his emotions, his country’s spiritual heritage and changing mores. Rajiv and his wife Lata (Geetanjali Kulkarni) want their daughter Sunita (Palomi Ghosh) to marry a man of their choice and settle down. But Sunita is happy with her work and doesn’t want to give up her independence. Certain traditions, Bhutiani suggests, are outdated. Michael Mcsweeney and David Huwiler’s terrific camerawork emphasises the stark divide between Rajiv’s hectic working life and the more measured pace in Varanasi; the transcendent over the corporal. Rajiv’s restrictive domestic sphere is conveyed through shots of cramped, shadowed rooms, contrasted with stunning tableaux of the Ganges, Varanasi’s ghats and temples.

As Rajiv resolves his differences with his father he recognises his own suppressed desires and the sacrifices he has made for his work. Towards the end of Hotel Salvation we suspect it has been more about Rajiv’s liberation than Daya’s. Rajiv’s spiritual side (his love of writing poetry) has been reawakened and he has learned the importance of accepting his family’s different needs. Bhutaini demonstrates an impressive maturity in his snapshots of life’s joys, pains and sorrows, order and chaos and allows us to see what Daya has understood all along – with death comes peace. For its UK release, Hotel Salvation is prefaced by the BFI’s ninety-second film of Varanasi’s ghats by the River Ganges (1899), believed to be the earliest footage of India. It serves to illustrate the city’s timelessness and beautifully complements Bhutaini’s feature.