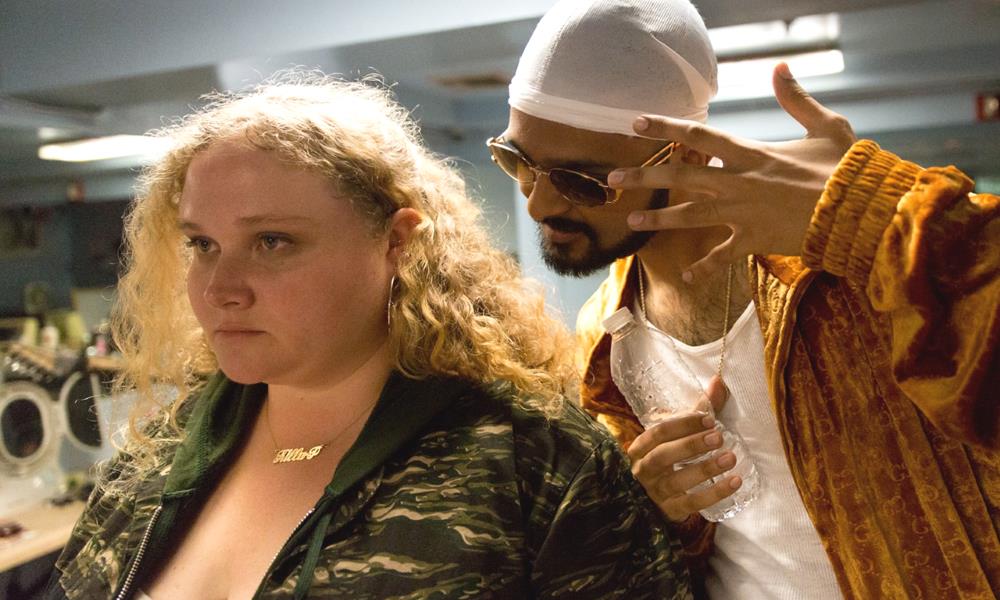 Patti Cake$ is an inspiring film full of heart and with a banging soundtrack. Chronicling an underdog’s quest for fame, this isn’t so much about one person’s success as it is about overcoming adversity in the pursuit of happiness.

Patricia Dombrowski AKA Killa P. AKA Patti Cake$ is a young working-class woman living in Bergen County, New Jersey, USA. Played with incredible deftness by impressive newcomer Danielle Macdonald, Patti struggles to get by in her urban, strip-mall, life. Working a variety of low paid jobs, she’s responsible for both her alcoholic has-been mother Barb (Bridget Everett), who seemingly fails to support Patti either financially or emotionally, and also her grandmother (Cathy Moriarty), whose ill health is putting huge financial pressure on the family. The film opens with Patti deleting voicemails from healthcare providers asking when payments will be met, and it’s clear that this young woman is burdened with responsibility.

But the hard life she lives is also one filled with hopes and dreams. This isn’t a kitchen-sink drama: it’s aspirational. Alongside best mate, nerdy pharmacist Hareesh, AKA beat wizard Jheri (Siddharth Dhananjay), Patti spends her evenings spouting rhymes from her rap-filled notebook. Along the way, they meet similar outcast, introvert punk Mamoudou Athie, with whom Patti ends up romantically involved, and together they end up making music (including hilarious support from Patti’s grandmother) with which they hope will launch them into a recording contract.

Central to the narrative is the taut relationship between Patti and Barb. Some of the most moving scenes are between mother and daughter, their relationship under stress, but their love for each other balances out their frustration and resentment. Pass the Bechdel Test, this film certainly does: it’s refreshing to see a female protagonist having complex relationships and conversations which don’t focus around men. There are touching moments where Barb and Patti question what it is to be a woman, how to take up space in a male-dominated world and be able to survive when life’s challenges hold you back; their answers to this, though, are not in agreement.

There are many conflicts between the two women. “Why don’t you act your age?” Patti asks her mother in the middle of one of their fights. “Why don’t you act your race?” Barb snaps back. This subtle acknowledgement of cultural appropriation – the story of a young suburban white woman trying to rap her way to fame and glory – is deftly handled by writer/director Geremy Jasper and avoids the film falling into stereotypical, problematic territory.

Another issue explored is that of body size. Patti is a larger woman and has been mercilessly mocked about her body since she was a child. When she enters an impromptu rap battle with a guy she has a crush on who works at the local pizza place, his misogynistic rhymes are full of fat-shaming and sexual humiliation, and it’s heartbreaking to watch. Her rhymes are better, though, and her success – both in the rap battle, and in following her dreams – are testament to her inner strength and self belief, and her refusal to accept fat-phobic remarks.

For a debut from Jasper, Patti Cake$ is very impressive, and the soundtrack, which is also his work, is excellent. Alongside a strong cast, who put in moving performances, Macdonald shines through as a star in the making. She had no experience in rapping prior to the film, and her craft in this is equal to her skills as an actor. Like Patti, her ascension to fame seems inevitable, and it will be interesting to see what roles she takes on next. An invigorating film, with a talented cast, Patti Cake$ is an uplifting and feel-good story.