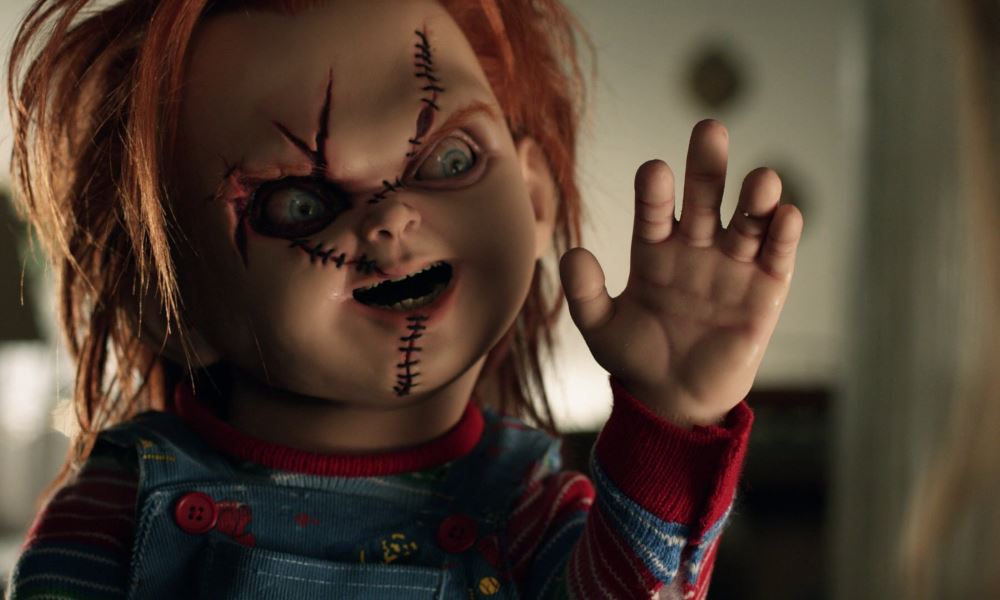 As the adage goes “Don’t fuck with the Chuck”, and the rule still applies. The maniacal doll is up to no good (for a change) in Don Mancini’s Cult of Chucky, a series revitalised from the remains of the Child’s Play series and showing no signs of slowing down.

Following directly on from events in Curse of Chucky, Nica Pierce (Fiona Dourif) has been carted off to the nuthouse, after the flame-haired psychopath (voiced by Brad Dourif) set her up as a mass-murderer. Once there, of course, the devil doll has more in store for the paraplegic heroine.

Cult of Chucky is by and large a gory hoot, with Jennifer Tilly stealing every scene she’s in. Sprinkled with James Whale-style camp, Brian De Palma’s baroque aesthetic and expressionist production design recalling William Cameron Menzies’ use of exaggerated sets in Invaders from Mars, Don Mancini’s new Chucky film delivers everything a Chucky fan could possibly want: corny one-liners, the carrot-haired monster being horrible to everybody, Jennifer Tilly playing a demented femme fatale and plenty of violence.

Since their rejuvenation under the auspice of creator Mancini, the once-controversial Child’s Play movies have taken a rewarding tongue-in-cheek approach, with doses of postmodernist winking at the audience. Most slasher movie franchises are on the bones of their arse by the seventh episode, dog-tired and ready for the chop, but with Mancini back on board calling the the shots, Chucky has found a new lease of life, moving away from the dark origins of Child’s Play and its two sequels into exclusively horror-comedy territory.

Fiona Dourif’s Nica was introduced in Curse and she has again taken centre stage. Locked away in an asylum that looks like something built in Stalinist Russia, her shrink thinks it’s a swell idea, as part of ongoing therapy, to bring a Good Guys doll – the Chucky version – into sessions so she can start to deal with her emotional issues. Meanwhile, original protagonist Andy Barclay (Alex Vincent), now all grown up, is out to stop the demonically possessed doll who has ruined his life since the age of six.

Like the best trashy psycho-thriller Brian De Palma never made, Cult of Chucky revels in giddy nonsense. Mancini deploys split-screen, split-focus, suspenseful editing and stages surprisingly icky deaths with aplomb (Nica stomping on a guy’s head until its total mush being the chief highlight). And how does a wheelchair user find herself walking? That would be telling. While the plot is supremely silly, hardcore devotees will be delighted to find twists and turns along the way.