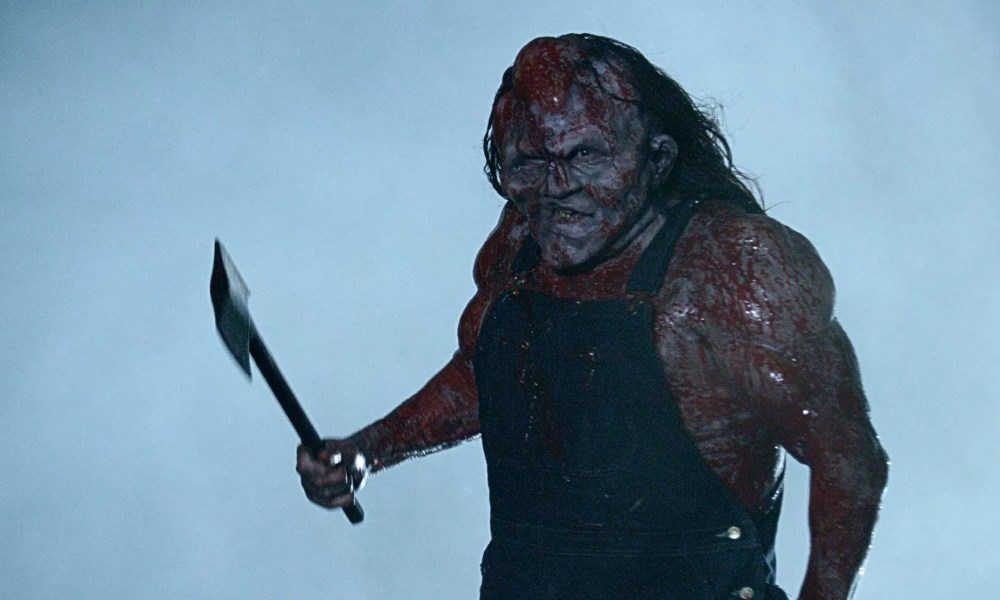 Kept under wraps for two years as a top-secret production, Adam Green’s Hatchet series redux Victor Crowley is a splatter movie joy. Both reboot and sequel directly connected to events in Hatchet III, Victor Crowley hits the horror movie sweet spot like an axe to the face.

There’s something beautiful in the simplicity of the slasher movie formula. It’s meat and potatoes horror, sure, but the genre’s basic pursuit of primal fears recalls Godard’s edict about needing nothing more to make a movie than a guy, a girl and a gun. The slasher flick merely switches the gun element in the equation for a machete, or any other weapon that can achieve maximum damage on human flesh.
Set ten years on from events at the end of Hatchet III, the film picks up with Andrew Yong (Parry Shen) being forced to return to Honey Island bayou, having been offered a shit load of Benjamin Franklins to accompany a TV crew. Having made a buck or two in the intervening years selling his story and writing a memoir (I, Survivor), nobody actually believes his stories about Victor Crowley, the deadly ghost spirit (played again by genre icon Kane Hodder) who haunts the swamps and carves up anyone who crosses his path. What’s most surprising about Victor Crowley is how funny it is.

Hatchet movies are very tongue-in-cheek, but this one is a riot of belly laughs. The humour, too, is not to the detriment of the scares and gruesome death sequences. Director Green has managed to make each gag, jump scare and murder work in almost perfect unison. Even amid the gags and splatter effects, one character’s situation is harrowing and works as a fantastic plot device, creating tension and a pressured situation, of course exacerbated by the psycho killer stalking Andrew and the television crew.

A slasher movie is only as good as its visual effects department. The very best artists give their director (and the audience) some primo blood and guts and The Victor Crowley team delivered – big time. The imagery is outrageously extreme and gleeful use of close-ups ensures we always gets a front seat to the executions with a range of beheadings, head stomps and wounds spewing blood like geysers in an American national park.

Green’s latest was inspired by a conversation with the late horror master George A. Romero, who made the director realise his comic-horror creation, a figure who is sort of like The Elephant Man gone psycho, was something to embrace and that the fan base clearly wanted more. Victor Crowley is clearly a very personal film for Adam Green and he’s made a terrific franchise relaunch in tune and in love with the fact there’s nothing quite like watching people die horrible, ridiculous deaths.