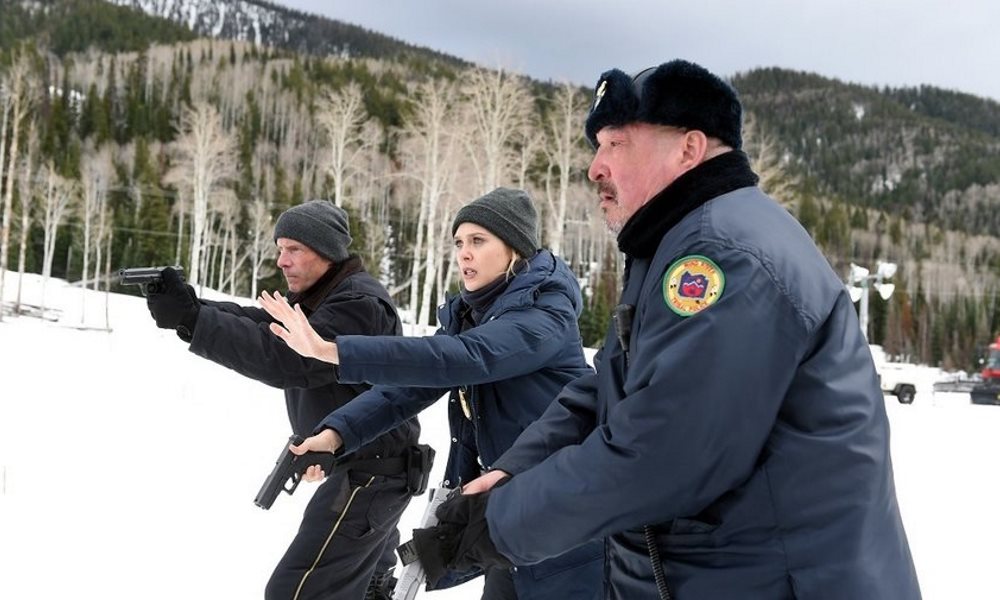 With the first-rate scripts of Sicario and Hell or High Water already under his belt, American actor and screenwriter Taylor Sheridan once again levels his pen at a great social injustice of the Land of the Free with his auspicious sophomore feature Wind River.

Bleak portrayals of the War on Drugs and the desperate measures taken to combat a ruthless banking establishment are followed by an equally unerring indictment of the unknown numbers of missing Native American women across the US of A for which – we are latterly informed – there is no official state record. Wind River is a bruising, desolate and impressively restrained film which like its wilderness setting hits stunning peaks when necessary.

From the US-Mexican borderlands, through the open plains of west Texas and further north to a wintry Wyoming, Sheridan successfully persists in isolating his story, and characters, in unforgiving territory. Enveloped by snowstorms, mountain ranges, and out of sight and mind of government, the eponymous reservation – whose tattered Stars and Stripes hangs inverted in distress as we arrive – becomes a microcosm for a much broader issue. Some may bemoan that this narrative is merely ‘inspired by actual events’ but it is a representative story, further highlighting the nation’s far-reaching, and debilitating apathy towards a forgotten community.

Opening wide-angle shots of a vast frozen valley floor, bathed and glistening under the light of a full moon, would be beautiful were it not for the bare-footed girl desperately fleeing from an unseen assailant. The causes of her death, and search for those responsible, forms the basis of a plot which weaves in a nuanced exploration of grief (notable given its predominantly male point of view) and whether it is truly possible to convey, let alone comprehend, the pain felt when a parent loses a child. With minimal screen time Gil Birmingham’s hulking anguish speaks volumes and ties an affecting bond to local hunter Cory Lambert (Jeremy Renner).

The latter – at home in the bitter conditions, blending in to the stunning scenery in camouflage gear hunting predators that prey on helpless weaker beings – is vital to solving the crime. The metaphor is not a subtle one and gives rise to one of a number of eye-rollingly clunky lines. “You’re looking for clues but missing all the signs,” he will later say to Elizabeth Olsen’s rookie FBI agent Jane Banner when the pair are on the trail for answers. Elements of the dialogue would not be out of place on a day-time police procedural drama but fortunately these moments are few and far between. With more than a few secrets, and past hurts, kept firmly under his cowboy hat, Renner’s stoicism begins to fissure like cracks in the ice. His performance is one of controlled, stiff-jawed brokenness and Olsen also impresses, effectively conveying moments where the injustice of this neglect boils over into angered disbelief.

Like his former screenplays, Sheridan punctuates his latest endeavour with instances of shocking violence that truly resonate and – one rather ludicrous Mexican standoff aside – they are breathtakingly ferocious. Some may target the politics of two white saviours attempting to rescue an indigenous community, and the brutal treatment of women in Wind River, as points of distasteful contention – and there is some credence to this. Native American women are only victims here, and their fathers, brothers and husbands impotently unable to protect them. However, in spite of this, the essential message remains one of a community united.