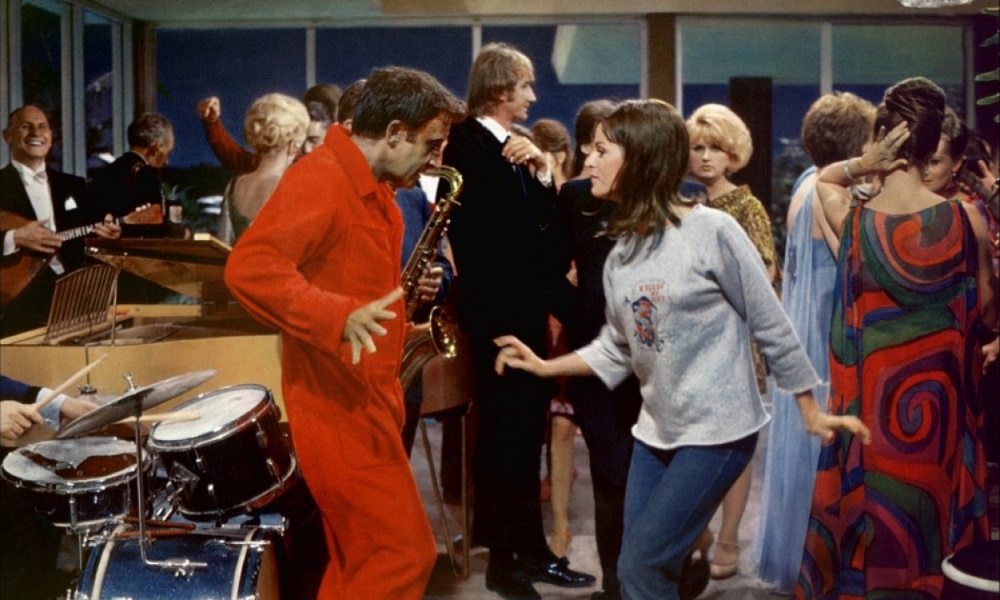 Hrundi (Peter Sellers) is an Indian actor freshly fired due to his bumbling clumsiness. But a mix up means that instead of being blacklisted, he is invited to an exclusive Hollywood party. Cue plenty of pratfalls, mishaps and other comic shenanigans.

Blake Edwards’ The Party, a 1968 vehicle for Peter Sellers, is fondly remembered, and is often very funny, with a subtle warmth and affection that informs its gag-based humour. An early set piece involving a missing shoe is superb, at once reminiscent of the silent comedy of Charlie Chaplin while also clearly informing the future antics of Mr. Bean. Yet with its longueurs and lack of consequence, The Party has too many jokes that go nowhere and a repetitive pace that gradually slips from laconic into tedium.

For a modern audience, the elephant in the room will be Sellers’ brown-face performance of Hrundi. On the one hand, it is an unsurprising product of its era, and to the film’s credit Hrundi’s ethnicity is never directly commented on or ridiculed, and Seller’s performance resists stereotype or caricature. But the mere fact of Sellers playing an Asian is uncomfortable – the subtext being that Hrundi’s nationality is inherently funny, and an implied explanation for his goofiness. It’s unnecessary and in the final analysis sadly damages the film. Putting that issue to one side, The Party still has structural issues that don’t work, with a second act that seems to drag endlessly and gags that prove the rule that badly-executed repetition is anathema to comedy. Really, how many times can a drunk waiter being strangled by his boss be funny?

More positively, a sub-plot involving French starlet Michele (Claudine Longet) and Hrundi has surprising warmth, and while never fully coming to the boil, includes a tender moment between the two that has Hrundi find his voice and finally become the life of the party. Indeed, what saves The Party from its more tedious moments is Hrundi’s faultlessly sympathetic character. The minutiae of awkward party patter is well-observed in Hrundi’s stilted attempts at making conversation, exposing the lack of real class among the soiree’s more obnoxious guests.

The film’s climax, a riot of chaos, bubbles and a literal elephant in the room, is fun and provides some catharsis for Hrundi and Michele’s flirtation, but fails to make up for the saggy mid-section and overall lack of direction. What frustrates most about The Party is its dearth of comic momentum – gags come and go but with little sense of consequence or structure. Sight comedy is at its best when the series of small mishaps build towards a grand catastrophe, like a Rube Goldberg machine where one ridiculous scenario builds towards the next. The Party has a surfeit of pratfalls, misunderstandings and awkward encounters, but very little of the connective structure needed to build towards a comic crescendo.