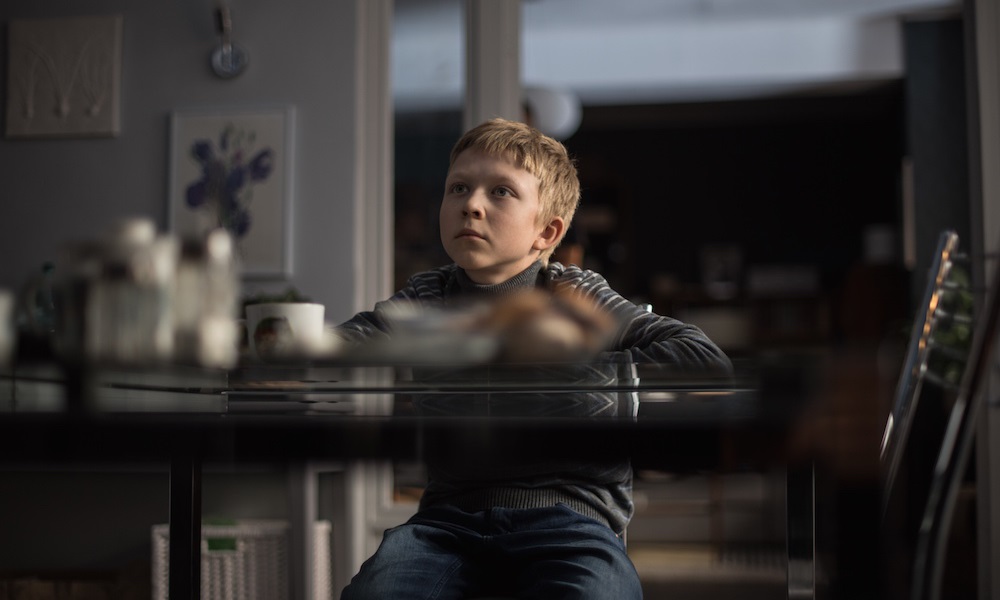 In 1985, Sting sang: “Believe me when I say to you / I hope the Russians love their children too.” Andrey Zvyagintsev’s masterful Loveless concerns itself with the same question but there’s a hopelessness that Sting’s MOR hit couldn’t hope to come close to.

Boris (Alexei Rozin) and Zhenya (Maryana Spivak) are a relatively young couple heading for a bitter but welcome divorce. They’ve both found new partners, the apartment is up for sale and the only loose-end is their 12-year-old son Alyosha (Matvey Novikov). The child overhears their arguments, as each tries to foist the unwanted child on the other in a heartless reversal of the Kramer vs. Kramer model. His private misery is unsentimentally but heartbreakingly apparent in a single shot, as he is revealed hiding behind a door his mother slams to punctuate a particularly vicious outburst. Zhenya now has a doting older rich guy, another escape hatch keeping her upwardly mobile. Meanwhile, Boris has wasted no time getting his mistress pregnant, although he worries about his fundamentalist Christian employer getting wind of it.

Both are apparently repeating the mistakes that characterised their first marriage (and with it, their son). When Alyosha goes missing it lays bare their neglect – the parents are notified by the school after Alyosha has been absent for two days. Leviathan, which won Best Screenplay at Cannes in 2014, also centred around a mystery, the solution of which was paradoxically opaque and obvious at the same time. As Loveless progresses, it morphs from an acidic comedy of marital breakdown to a procedural thriller as a team of volunteers – a quietly heroic force of moral and practical good – scour the apartment buildings, the woods, posts fliers and interview neighbours, searching tirelessly for the boy. Alyosha is first presumed to have run away and Boris and Zhenya visit her mother to see if he’s gone there. The acrimony between mother and daughter makes a powerful point.

As much as postmodern Russia is on display – all escorts, feral start-ups and constant selfies – the lovelessness of the title is something that runs deeper and further back than Putin and iPhones. Zvyagintsev allows his camera to linger on passers-by, a teacher cleaning a blackboard as the snow falls passed the windows, a man walking into the darkness of a park. Moving through a high-end restaurant, an unseen man demands a phone number from an escort which she delivers straight to camera. Suspicions linger as to whether these glimpses are of mere banal indifference or whether there might be some darker intent. A man at the bus stop peruses the missing boy’s flier for a moment, then moves on. This is a country blithely unaware of the mistakes it is repeating and in one moment of starkly obvious symbolism a main character wears a Russian tracksuit while life goes on. Hardly subtle.

The subtlety and beauty of the shots, however, is undeniable. Mikhail Krichman’s camera captures a stark beauty as the rescue party in high visibility orange jackets descend on a misty winter wood straight from Brueghel. The methodical searching of an abandoned building that the boys used as a camp is reminiscent of Andrei Tarkovsky’s vision of dripping multilevel ruin in Stalker. The powerful score by Evgueni and Sacha Galperine also deserves praise in providing a solemn and at times unnerving counterpoint to the ongoing futility. Back to Brueghel once more via W.H. Auden: “About suffering the old masters were never wrong.” For all his relative youth, Zvyagintsev is masterfully compiling a cinematic record of suffering, and the indifference surrounding and facilitating it, which will live on.