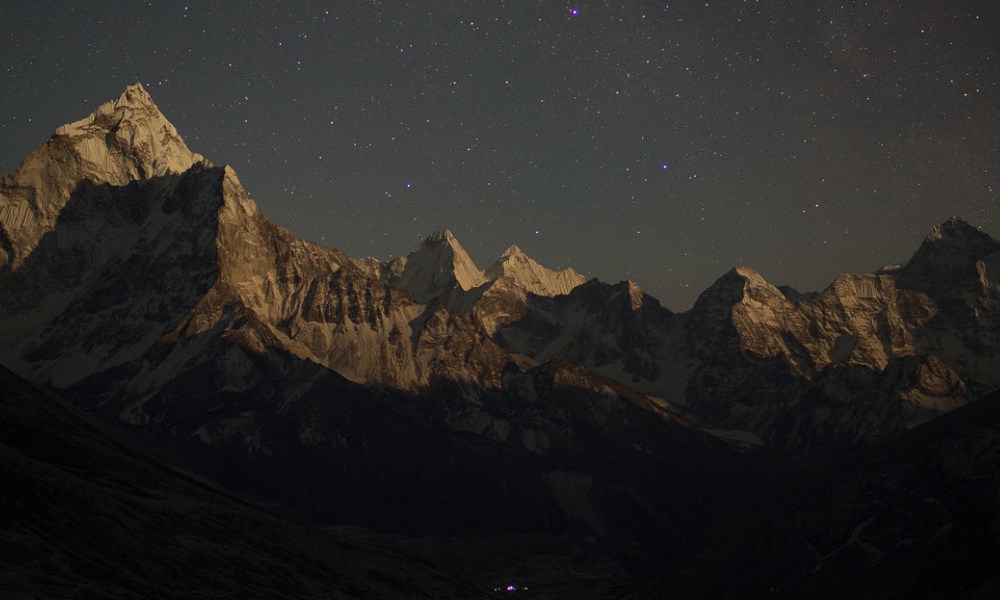 A meditation on the potential held, respect demanded and inherent risks in scaling such heights is coupled with a swift history of human kind’s mythic wonderment and then fascination with conquering the world’s mountains. Narrated by the venerable Willem Dafoe, Robert Macfarlane’s script is paired with Renan Ozturk’s photography to create a discursive essay whose epic scale and truly stunning visuals compensate for a documentary lacking in real substance. A commanding orchestral score is at times a little too aggressive given the powerful serenity of vistas shown but does certainly reinforce their grandeur.

Unlike Peedom’s former film Sherpa, which explored the working rights of those men risking their lives to facilitate the whims of rich tourist thrill-seekers, there is little depth to any argumentation proffered by Mountain. Interjecting at regular intervals with a plethora of contradictions on the highs and low, risks and rewards afforded those who choose to put their lives in danger in brutal conditions for the thrill of touching the sky, or descending at high speed by ski, mountain bike, parachute or other adrenaline-fueled folly, Dafoe’s is the sole voice in the film and this results in distancing image and narration.

Sherpa was particularly successful because the testimony of these brave men took us inside their homes, lives and families. Who are the men and women we see dwarfed by cliff faces, who we watch scale these extraordinary heights? What are the silent, meditative customs displayed by monks whose actions hark back to the ancient worship of gods and monsters who were once believed to hold dominion over these inhospitable regions? Though there is a certain poetry to these images we never meet them nor are these questions answered.

A shift from crystal-clear sweeping helicopter shots, Go-Pro footage and camera shots from heart-in-mouth angles to a painterly black and white transports us back in time and – paired with grainy library imagery from the birth of mountaineering – the evolving history of man’s fascination with conquering Everest and the birth of the winter sports industry is interesting, but whether this is merely informative, contemplative, or a condemnation of mankind’s impact on this savage nature is also left rather opaque.

Cinematographer Ozturk, who collaborated with Peedom on the former film as well as Jimmy Chin’s exhilarating Meru, continues to impress here, inducing sweaty-palms and sharp intakes of breath from start to finish. We, too, pose the question of why on earth anyone would put themselves in such positions of potential catastrophe but as an opening title suggests, ‘Those who dance are considered mad by those who can’t hear the music.’ We come to know and appreciate Mountain’s tune but only some will be moved by its rhythm.