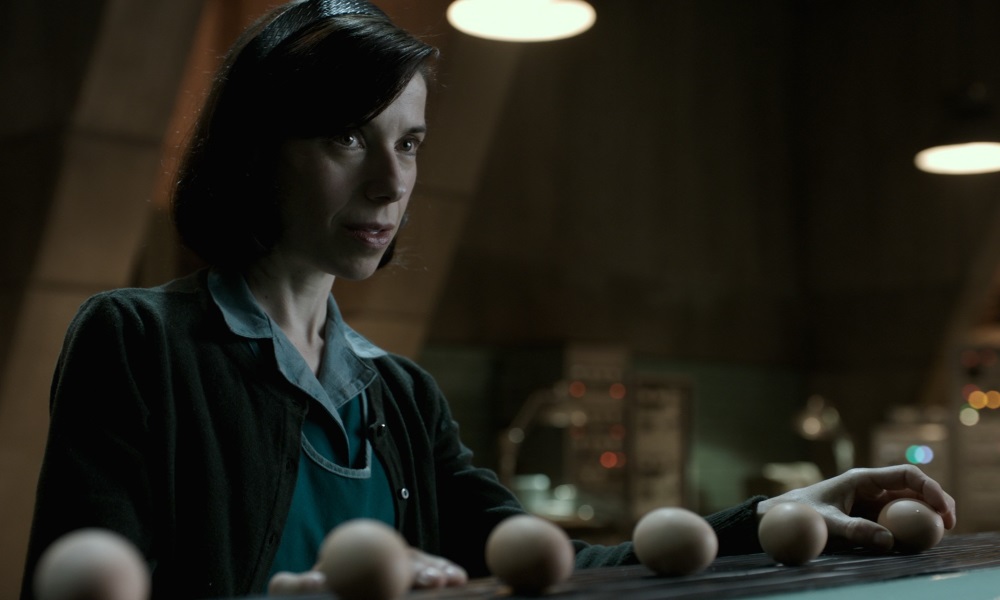 Mexican director Guillermo del Toro won his first Golden Lion at this year’s Venice Film Festival with The Shape of Water, a monstrous fairytale about the love between a mute cleaning lady (Sally Hawkins) and a creature from the Black Lagoon.

Is anyone making cinema as lusciously beautiful as Guillermo del Toro at the moment? His movies have such a rich texture it’s a temptation not to run your hand over the decorated velvet of the screen. The colours are as deep as an illuminated manuscript and the stories themselves intricate cabinets of wonder and surprise. Dan Laustsen’s cinematography as well as the production design and art direction by Paul Austerberry and Nigel Churcher all deserve top billing here. With The Shape of Water, we are taken back to a sumptuously recreated Cold War period. In a secret government research facility, a creature (Doug Jones) – “The Asset” – has been brought in for study, torture and ultimately destruction.

Hawkins plays Elisa, a cleaning woman who lives on her own in a creaking apartment above an old, almost impossibly beautiful cinema. She has scars on her throat and is mute. Her life is a fixed routine where even the first thing in the morning – bathtub masturbation – is egg-timed, but she is happy. Her neighbour Giles (Richard Jenkins) is a gay commercial artist who, like the cinema below, is being put out of business by new technologies: photography, in his case, and television. She also has a good friend in Zelda (Octavia Spencer), who in a demotion from Hidden Figures is mopping up after the eggheads, including Michael Stuhlbarg.

But this is The Cold War, and keenly aware that the Ruskies are winning the Space Race, hard G-man Strickland (Michael Shannon) is called in to slap some scientific benefit out of the creature he found and transported to Baltimore with the help of his cattle prod. The binaries are set in place – monster vs. human, East vs. West, politics vs. science – but del Toro and fellow screenwriter Vanessa Taylor know how to flesh out these characters. In one scene Strickland decides to buy a new Cadillac. “I don’t like green,” he tells the salesman who slickly corrects him, “It isn’t green, it’s teal.” It’s this level of detail that makes The Shape of Water so fascinating, not only in its set design but also in its people. Giles and his love of pies; Zelda and her almost poetic moaning about her ungrateful husband; Elisa and her unexplained love of hard-boiled eggs. Even extras seem to arrive with a back story: a fat man sits at the bus stop with a massive cake in his lap sans one slice. We get a glimpse for a second but there’s a first act already there.

Gradually, Elisa woos the monster (those eggs come in useful), recognising another outsider. Del Toro has always liked his monsters and here subtext is very much text with Giles out-and-out comparing the monster and his own marginal status. When pursued both by the Commies and her bosses, Elisa breaks him out of the facility and the feelings turn from the sympathetic to the erotic.The nostalgia for the period, for old cinemas, old jazz tunes and old cars is reminiscent of Carol. And like Todd Haynes’ film, del Toro is also painfully aware of the prejudices and violence that made that period so difficult for so many. A TV report on a civil rights protest being broken up by police is swiftly turned over to an old musical in what is essentially a cinematic mea culpa.

If there’s one thing that stops The Shape of Water being an absolute masterpiece it’s probably the lack of spark when it comes to the relationship between the monster and Elisa. It’s difficult to view this as an actual relationship. The creature doesn’t get much agency, and their rapport seems more at the service of an idea than a genuine affection. Compared to the warmth of E.T.’s literally glowing heart, The Shape of Water has a glowing brain and other bits. But this is deeply satisfying filmmaking at its best. It’s witty, smart and brilliantly played, plumbing the sub-aqueous depths of our psyches, our histories and desires.