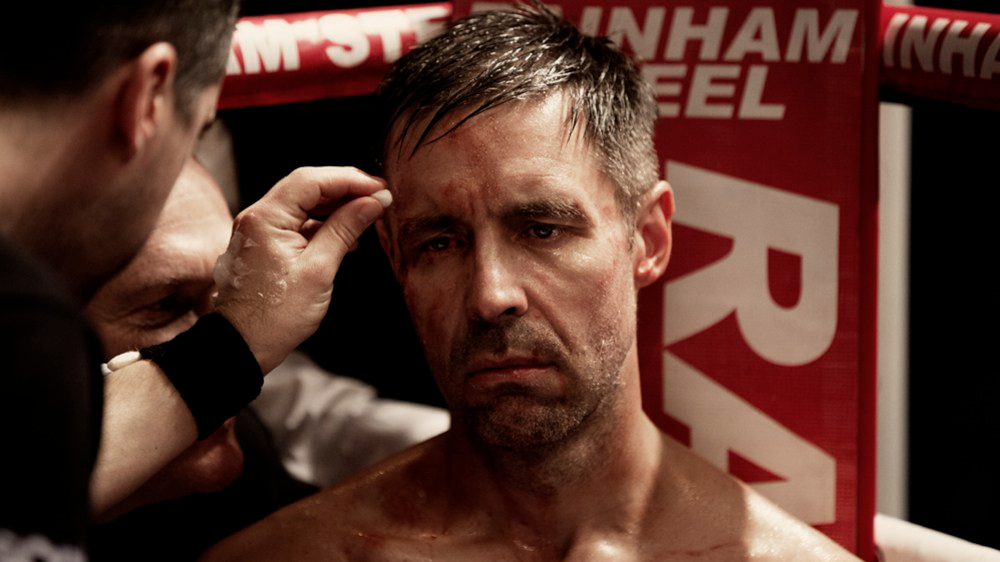 Paddy Considine gets back behind the camera – with what could be the final time according to the director’s own social media – for Journeyman, a boxing drama that combats its commonplace narrative with genuine emotion and first-rate casting.

It’s been six years since Considine’s challenging debut Tyrannosaur: an uncompromising, traumatic experience that has lived on in memory after just one viewing. With Journeyman, Considine has once again directed (and written and starred in) a supremely affecting and profoundly human drama. This time, it’s less fervently unpleasant, but by no means any less tragic.

We follow Matty Burton (Considine), a middleweight boxer at the top of his career’s game, his retirement looming after one final, hotly televised bout with young, cocksure boxer Andre Bryte (Anthony Welsh). The first act concludes with their rival fisticuffs that’s more superior and authentic than most sporting scenes in recent memory: Pia Di Ciaula’s editing and the duo’s true-life pugilistic skill accentuates every punch, jab and blow with legitimate authority. It’s conventional in its detail, but with such intense skill it’s easy to make allowances for potential genericism.

As a force of power, Considine commands every moment; pre-fight cordiality and rapport with the press; his adorable relationship with newborn Mia; and his affectionate relationship with his wife Emma (played phenomenally by Jodie Whittaker). Post-fight, with Burton’s health suddenly cast into focus, his tone gradually changes. It’s a transformation that’s nothing short of heartbreaking. His adversity could have been condescending or judgemental to those with intellectual and physical disabilities, and Considine avoids painting a suspiciously wrought caricature with sympathetic characters and narrative.

His artistry both behind the camera and in front is visible in every situation, withholding small details or building tension with agonising sound or scene-blocking (there’s one incident that’s terrifying in its simplicity, but even more so because of the sound and cinematography), and his proficiency is fully on show whenever Matty and Emma share the screen. Going from commanding a set to commanding the scene is an incredible talent, and Considine does it with assurance.

Though Matty is the nominal journeyman, Emma’s journey is as much the film’s ostensible leader as he is. Her evolution from high-spirited wife to stoic carer appoints her as the audience’s envoy: her day-to-day motions and altruism in the face of an unthinkable situation add extra weight to the already heavy text. She possesses a tangle of unconscionable, tacit questions – ‘to stay or to leave?’ being the biggest and messiest – and each one is wholly justifiable, lending an authenticity to Emma’s position. It’s simply a bonus that Whittaker is tremendous.

Journeyman revolves around one of the most masculine of sports, but here is a screenplay that challenges that masculinity. For the most part, Matty’s close-knit team of friends and aides are hard-hearted and steely, masking their feelings wherever possible, but at a point where these men could have furthered their facade of aloofness, Considine’s script promotes organic emotion, including an emotionally tender scene between Bryte and Matty. Much like Tyrannosaur, Journeyman is not a pleasurable watch, but as a quietly devastating and heartfelt approach to trauma and those affected by it, it’s a winner.