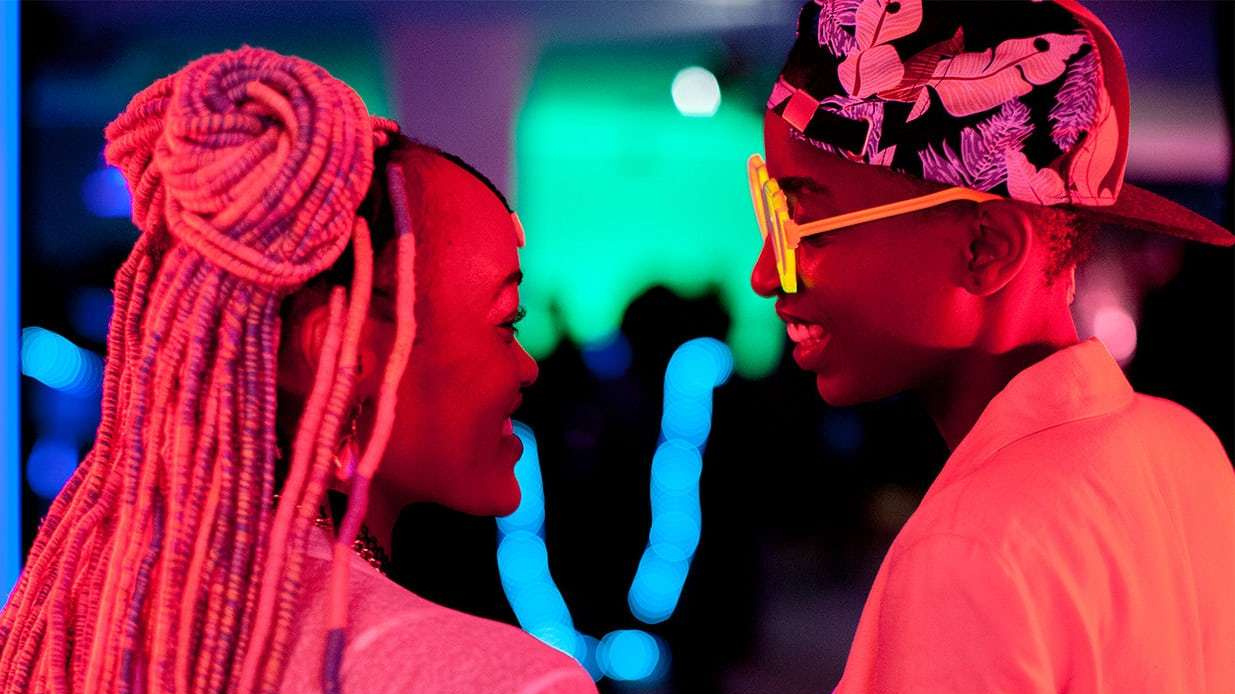 The Kenyan government had already banned Wanuri Kahiu’s second feature, Rafiki, before it even premiered in Cannes. Telling the story of a pair of young women who fall in love only to be ostracised by their local community, the government feared it would “promote lesbianism” which remains illegal in Kenya. All of which has only added to anticipation for the film.

Stories concerning forbidden, star-crossed love are now regular fare at film festivals, with Todd Haynes’ Carol playing at Cannes only three years ago. Yet, while the premise of Rafiki is well-worn, the context of the film is not and Kahiu brings fresh zest to a familiar story which is told with spirit. This is partly due to captivating performances by the two newcomers, Samantha Mugatsia and Sheila Munyiva.

Based on the short story Jambula Tree by Ugandan writer Monica Arac de Nyeko (which was also banned), the story centres on Kena (Samantha Mugatsia). A tomboy by nature, she spends her free time skating around her brightly coloured town, hanging out with her friend Blacksta (Neville Misati), and working for her father John (Jimmy Gathu), a shopkeeper and aspiring politician. She also does her best to avoid the local town gossip, Mama Atim (Muthoni Gathecha).

Kahiu paints the local environment vividly and the backdrop is full of colourful characters, ranging from homophobic barflies to girls practicing dance routines on the street. One such girl is Ziki (Sheila Munyiva), the daughter of John’s political rival in the local elections. With her neon braids and lust for life, she quickly catches the eye of Kena, who still remains unsure of her sexuality.

Rafiki shines in depicting the young lovers’ blossoming feelings. They discuss their dreams – Kena wants to be a nurse, Ziki thinks she should dream bigger and become a doctor. They dance in nightclubs covering each other in neon paint, but it is the moment of their first kiss that captures the heart. Munyiva and Mugatsia’s chemistry is beguiling, seen through fleeting, loving glances and tender caresses.

However, as you might expect in such a story, their love is soon exposed. Mama Atim, expertly portrayed by Gathecha who brings a full-blooded bigotry to her performance, leads a gang of locals to drag the girls from their secret getaway. Beaten and bruised, their parents intervene, trying to keep them apart. In these respects, the film falls into a fairly conventional narrative. Nevertheless, the vibrant context of the film allows this familiar story feel fresh.

Running at only an hour and twenty minutes, Kahiu sometimes allows the plotting to go too broad. The decision to pepper scenes with music from Njoki Karu and Muthoni Drummer Queen adds energy, but on occasion wanders into more sentimental territory. While Kahiu’s film may have its flaws, there is no denying the power and passion poured into the project. It would take a callous heart not to fall for the charms of the leads, and the urgency of the story.