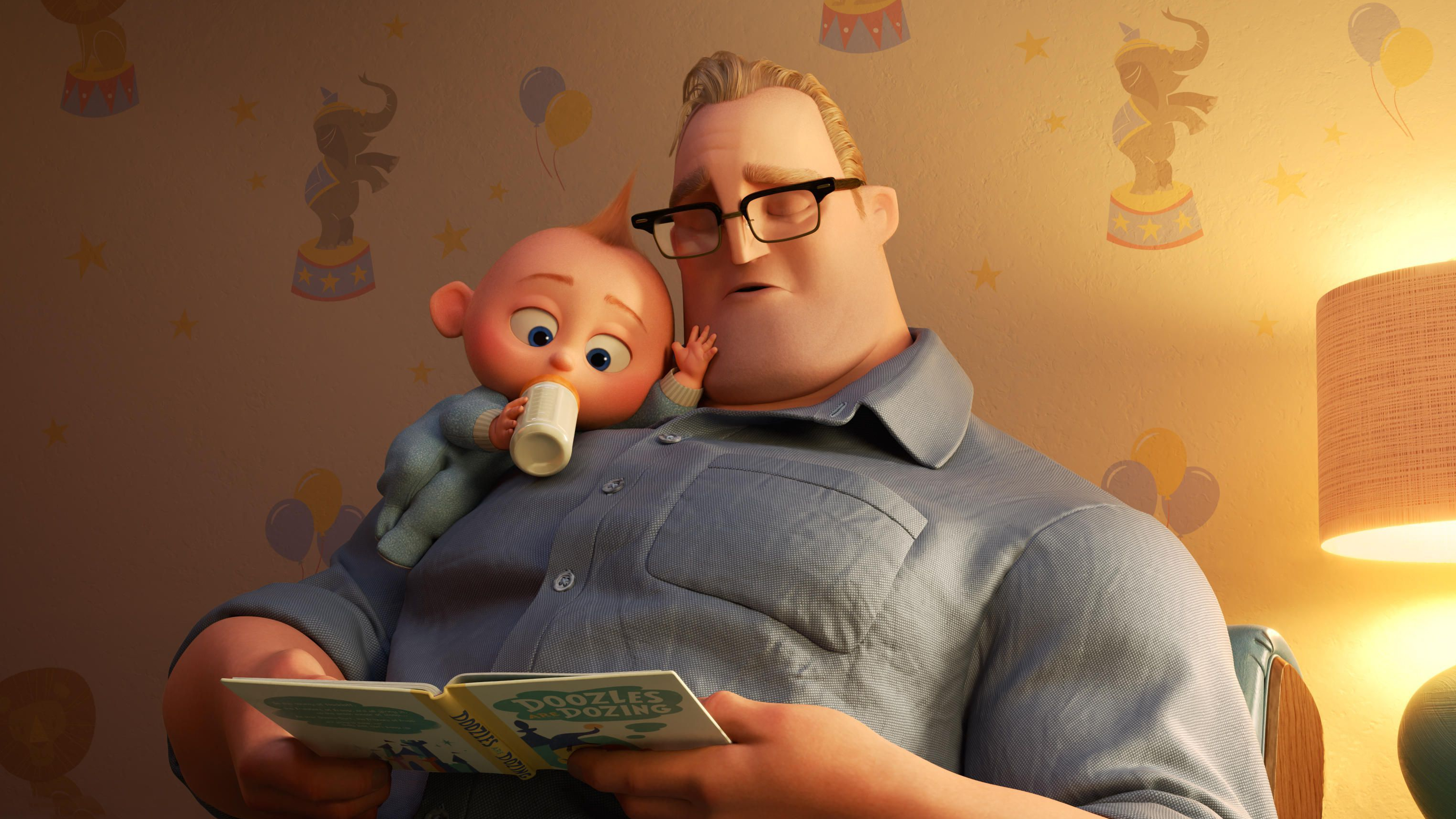 The Marvel Cinematic Universe may have the market hold, but Incredibles 2 – which arrives some fourteen years after the original – is a superior superhero film to much of their output. It’s also a wonderfully ever-inventive film that, despite being a sequel, feels fresh and original.

The film picks up where the last one left us, with our heroes up against The Underminer (John Ratzenberger) who manages to pull a vanishing act, leaving a wake of destruction behind and only the Parr family to blame. They’re placed in witness protection (a compact motel, to be precise), until Devtech, a company run by siblings Winston (Bob Odenkirk) and Evelyn (Catherine Keener), approaches them with new hope, this time with Elastigirl (Holly Hunter) front and centre. As she takes to the streets, Mr. Incredible (Craig T. Nelson) stays at home to take care of the kids. All three have their own difficulties: math for Dash (Huckleberry Milner), insecurities for Violet (Sarah Vowell), and a whole heap of powers for Jack Jack (Eli Fucile).

It’s a fine balance to achieve – that of superheroics mixed with a sitcom-style family life – but one that Brad Bird (who also returns to direct) executes with finesse. The unsavoury taste of Tomorrowland is firmly in the rear view. The action sequences are lively and compelling, the film’s main villain – a mysterious masked hacker who assumes the moniker Screenslaver – culturally relevant (even if a tad underwhelming and unfocused in its intention), and the visuals truly pop. In the fourteen years it’s taken for the sequel to come to fruition, animation capabilities have improved – something the film showcases to an eye-popping degree, though it’s careful not to sully what came before.

The best of these advancements are manifested through Jack Jack. The baby is one of the film’s funnier components (another is the return of Bird’s own Edna Mode), and his varied powers – laser eyes, inter-dimensional travel, fireball, and more – are rich in design and function to the overall narrative. The dynamic within the Parr family continues to be a highlight. They all have their own unique personalities (better explored here than previously), but it’s as a team they work best, whether it’s fighting crime or learning how to have a hand in each others’ lives. It all helps that the voice talent suit their characters down to the ground, with Vowell’s quivering tones expressing Violet’s anxieties particularly well.

Incredibles 2 is big, action-packed and rich in plot, but it has a personal charm to it as well. The characters are reminiscent of real people, their fears, hopes and dreams true to life. Bird hasn’t only created a sequel that matches – if not surpasses – its predecessor: he’s also used situational comedy and drama to raise the stakes in a way no amount of city-wide destruction can do. The superhero parts are fantastic. However, Incredibles 2 zings when its tapping into the varied nature of the everyday – new math problems and boy troubles included. And it must be noted how intrinsic Michael Giacchino’s score is throughout the whole film.