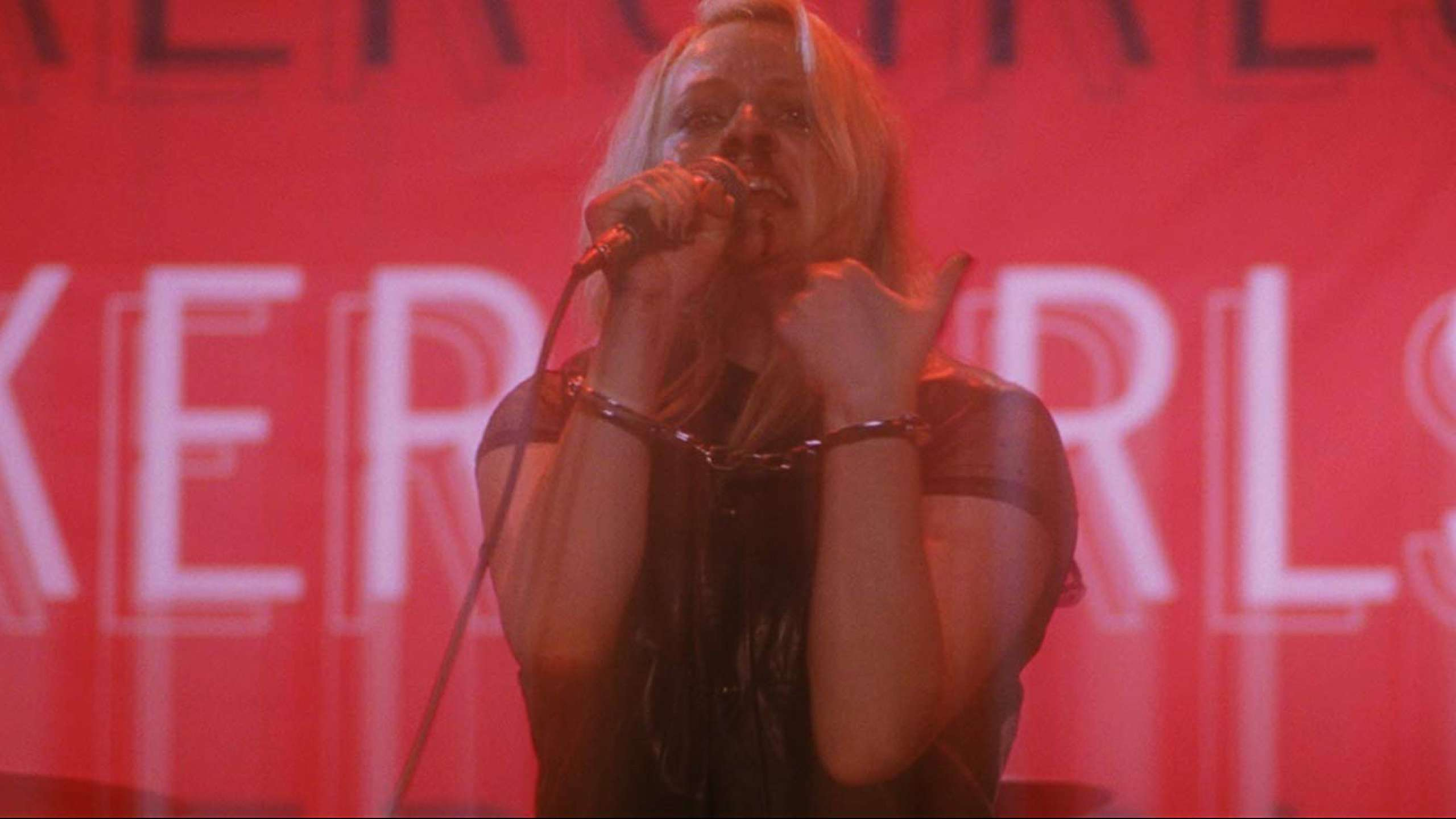 Becky Something (Elisabeth Moss), the front woman of punk band Something She, is in trouble. The band once hit the big time, but Becky’s intolerably erratic behaviour has virtually crippled the group and threatens to destroy Becky.

Told in five distinct acts, Alex Ross Perry’s Her Smell is an intense study of self-destruction. Each of the film’s main segments is preceded by videocam footage of Something She’s ascendancy, a hopeful past juxtaposed with the broken present. Perry incorporates the time-honoured technique of using analogue video to invoke memory and nostalgia, but it is undoubtedly well-executed here.

The film opens with Becky and her band mates, Ali van Der Wolff (Gayle Rankin) and Marielle Hell (Agyness Deyn), after a gig in a half-full club. Tensions rise quickly, aggravated by her ex-boyfriend Danny’s (Dan Stevens) arrival with their baby, whom she alternately dotes over and barely acknowledges. As her band and friends try to manage her, Becky’s backstage rampage exacerbated by the shaman she has hired to perform a bizarre, obviously fraudulent ritual.

It’s an astonishing sequence, not least because of Moss’ all or nothing performance. Relentlessly swinging from ecstasy to maternal love, rage and outright psychosis, it’s a truly psychopathic performance. Long, lurching takes create a sickening sense of chaos, and the lurid colours of the backstage lighting exacerbate an already overheated mood. If that’s not enough, there is a constant, droning background thrum – at first the sound seems to be coming from the music on stage, but it’s more like it’s emanating from Becky herself.

The return to another euphoric videocam roll is an all-too-brief relief from the madness, though now contextualised by the band’s coming dissolution. It’s not long, however, before we are plunged back into Becky’s toxified, collapsing ego, this time during the worst recording session in history. While Ali has finally had enough and quits, Becky brings on three new band mates including Cara Delevingne’s starry-eyed Cassie. They are young, naive and starstruck by Becky’s past glories, and their introduction gives us a perspective on the influence that Becky is able to exert over others.

Each new segment of the film brings a new dimension to Becky’s breakdown. The fourth act, set eight or nine years later, is the most powerful. The chaos of the earlier sequences gives way to contemplation and not a little regret, while the seasick camera of the first three acts settles into shell-shocked stillness.

Becky is, for most of the film, a truly horrible person, but the film contextualises her behaviour through the enablers, con artists and ego-inflating acolytes that feed off her self-destruction. Her Smell’s ambivalence towards the allure of artistic genius and its toxifying effect on the ego eschews moral judgement or sentimental lesson-learning in favour of pragmatic, fragile redemption.