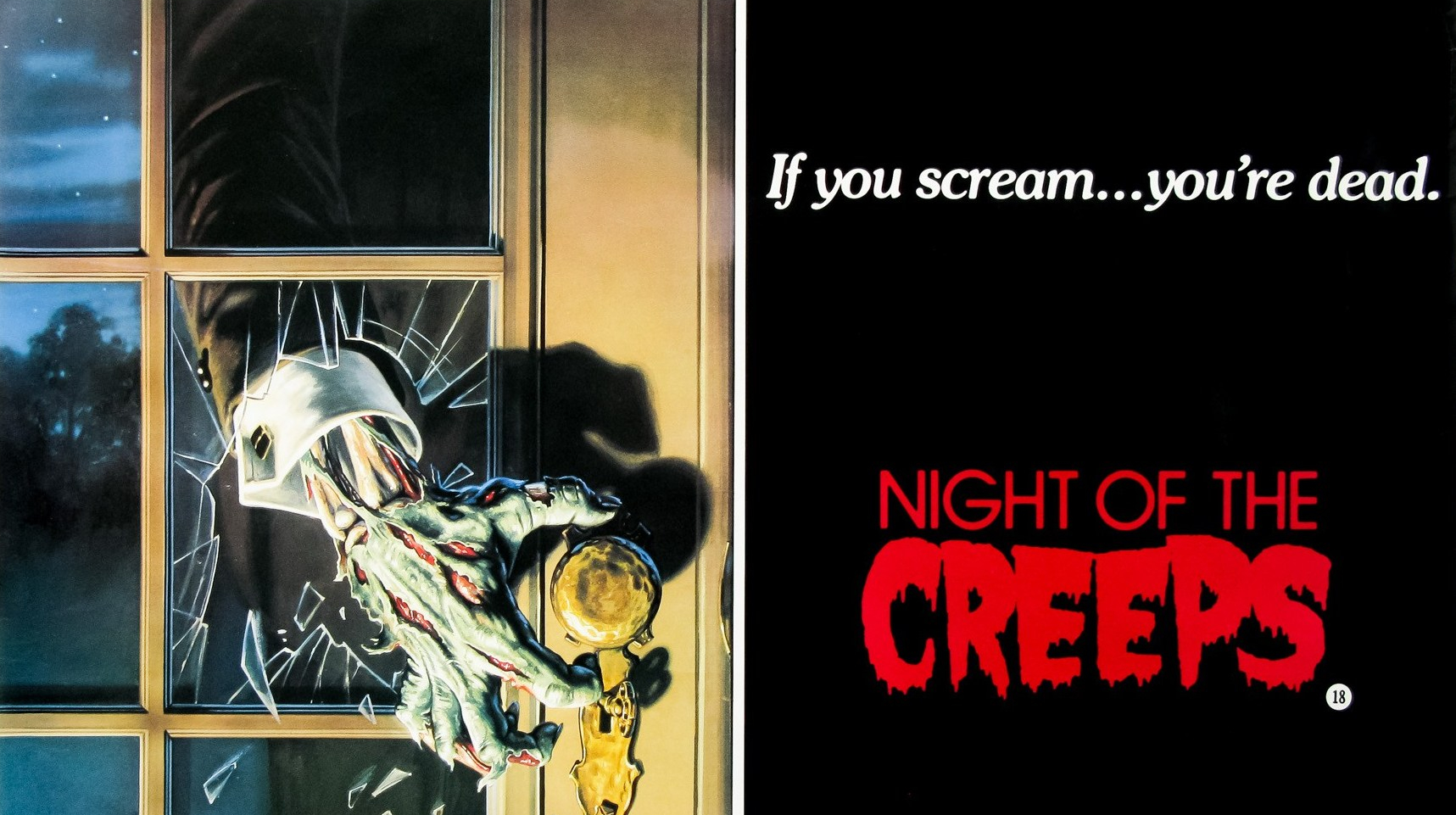 Fred Dekker’s 1986 Night of the Creeps begins as it means to go on, opening with a frantic chase through the corridors of a spaceship populated with ludicrously rotund aliens, crashing into  the monochrome of 1950s small town USA, before propelling us forward in time to the garish purple of the 1980s.

In its irreverent tribute to classic horror Americana, Dekker’s film is very much part of the Gremlins / Critters / Return of the Living Dead school of horror comedy. And while perhaps not as illustrious as some of its contemporaries, Night of the Creeps has charm and a surprising amount of warmth to balance out its bucket loads of gore. After the 1950s-set prologue, the story proper opens with college loser Chris (Jason Lively) pining after Cynthia (Jill Whitlow), the hottest girl on campus. But wouldn’t you know it – Cynthia has a boyfriend, Brad (Allan Kayser), and he just so happens to the biggest douche on campus.

Dekker’s formulaic set up is knowingly contextualised through its B-movie prologue, moving through sub-Star Wars sci-fi and 1950s monster movie before arriving at the 1980s college movie. There’s a charming self-reflexiveness to it all, bolstered by Dekker’s dab hand at swirling American pop-genres together. Indeed, Dekker’s trick of setting up one film – a broad college comedy – only to have another – the special effects-laden horror flick – take it over is an oft-replicated trick of the trade.

What distinguishes Night of the Creeps from similar offerings is the surprisingly warm friendship between Chris and his best friend J.C. (Steve Marshall). In one unexpectedly insightful exchange, J.C. calls Chris out on his incessant self-pitying whining, telling him that everything might be going to hell, but since there’s nothing anyone can do about it, it’s better take your laughs where you can.

All Hell certainly does break loose when Chris and J.C. are recruited by Brad’s fraternity to dump a corpse on the campus as part of a pledge prank. Discovering a body at a shady science lab, little do they know it is the original victim from the 50s-set prologue. By shifting the corpse they inadvertently revive the nasty space-slugs dormant inside, who turn their hosts into murderous zombies. Cue plenty of delightfully icky splatter and disgusting creature effects. A brilliantly daft subplot with anachronistic police detective Cameron (Tom Atkins) – “thrill me!” – and an explosive finale simply seal the deal, confirming Night of the Creeps as a faultlessly fun genre picture.