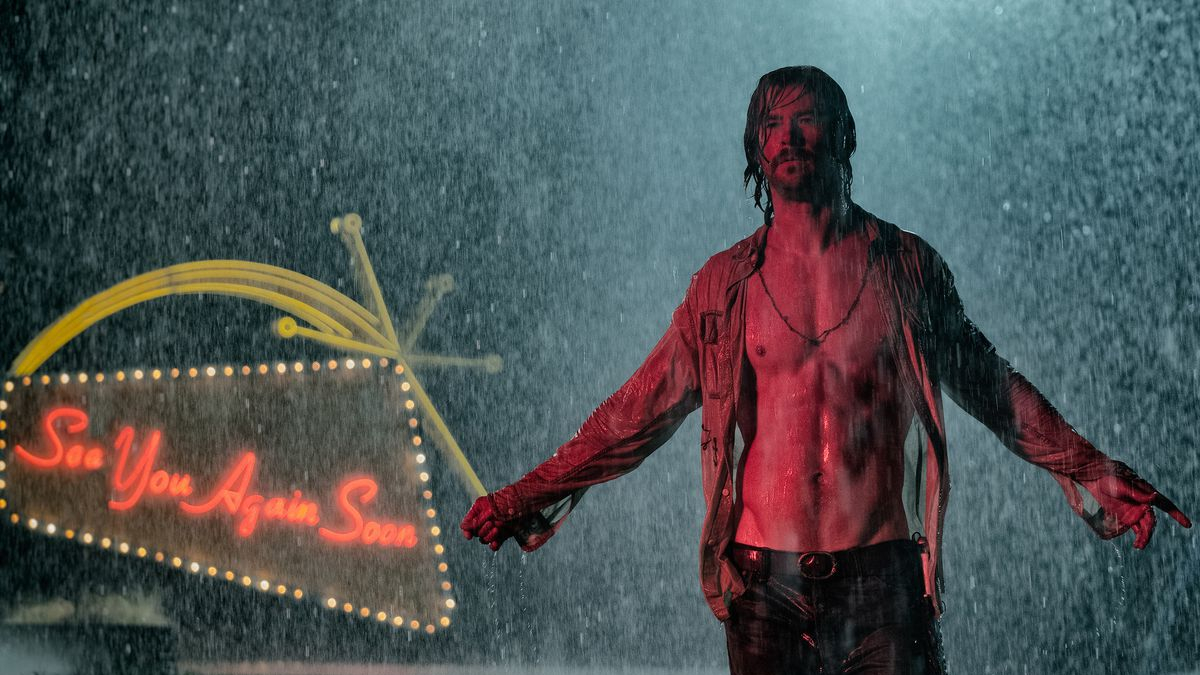 Drew Goddard’s directorial debut The Cabin in the Woods was a playful deconstruction of the horror genre, housing a narrative yarn that continues to unspool toward its finale. Goddard’s latest offering has a similar narrative expansion to Cabin, but less of its playful tonalities.

Bad Times at the El Royale is a hard-boiled page-turner, not as interested in deconstruction than in elaborations of character. The titular hotel perhaps once saw better times, but eras end and off-seasons are inevitable. At the height of this vacuum, a set of strangers arrive to liven things up. Each has a secret, but (un)luckily for them, the skeletons in their proverbial closet may pale in comparison to the machinations of the El Royale. Guns and lies are on the table, and it’s anybody’s guess who walks away.

The opening shot establishes a few central concerns of Bad Times: voyeurism and tension, all wrapped up in noir. A man lifts a gun cloaked in shadows, and as he pulls up the floorboards to stash a bag of money, it suggests a visualisation of the film’s dive into depravity and vice. It also establishes its sudden bursts of violence, which effectively gives Bad Times its edge of uncertainty.

Indeed, the whole film plays out like a thick pulp novel, entangling narratives of crime and violence with overlapping timelines. Goddard uses this edifice to focus on character, going so far as to sacrifice the ramping of tension or narrative propulsion to strengthen back story; it’s committed and admittedly charming, if somewhat questionable. For all his narrative play, Goddard is fixated on investigations of the soul, using music as a unifier between character and heart.

This heart is carried by the performances, with Jeff Bridges giving a sublime turn across from Cynthia Erivo’s enrapturing and burdened singer, Darlene. She is the true life force of the film, as well as the key to its stellar soundtrack. Jon Hamm controls one of Bad Time’s early highlights, guiding the camera through an intriguing sequence of narrative propulsion that exposes the perverse nature of the El Royale. Chris Hemsworth is introduced like a corrupt beach Jesus, and it’s a joy to watch him play with power and the fragile (read: maniacal) male ego. Their interactions are all tense and enjoyable to watch unfold, even if there isn’t always the firecracker energy you’d expect.

And yet Bad Times at the El Royale doesn’t seem intentioned for fireworks, as much as it is a morbid love letter to old souls and a bygone era of music. For every slick moment of style, there is an immensely somber undercurrent that matches its beating heart and occasional levity. During one scene, Darlene speaks of the ambitions of a career by stating, “singing’s singing.” Whether in a dive bar or a grand concert hall, you may as well belt your lungs out. An audacious and unwieldy cocktail, Bad Times at the El Royale ultimately sings where it counts.