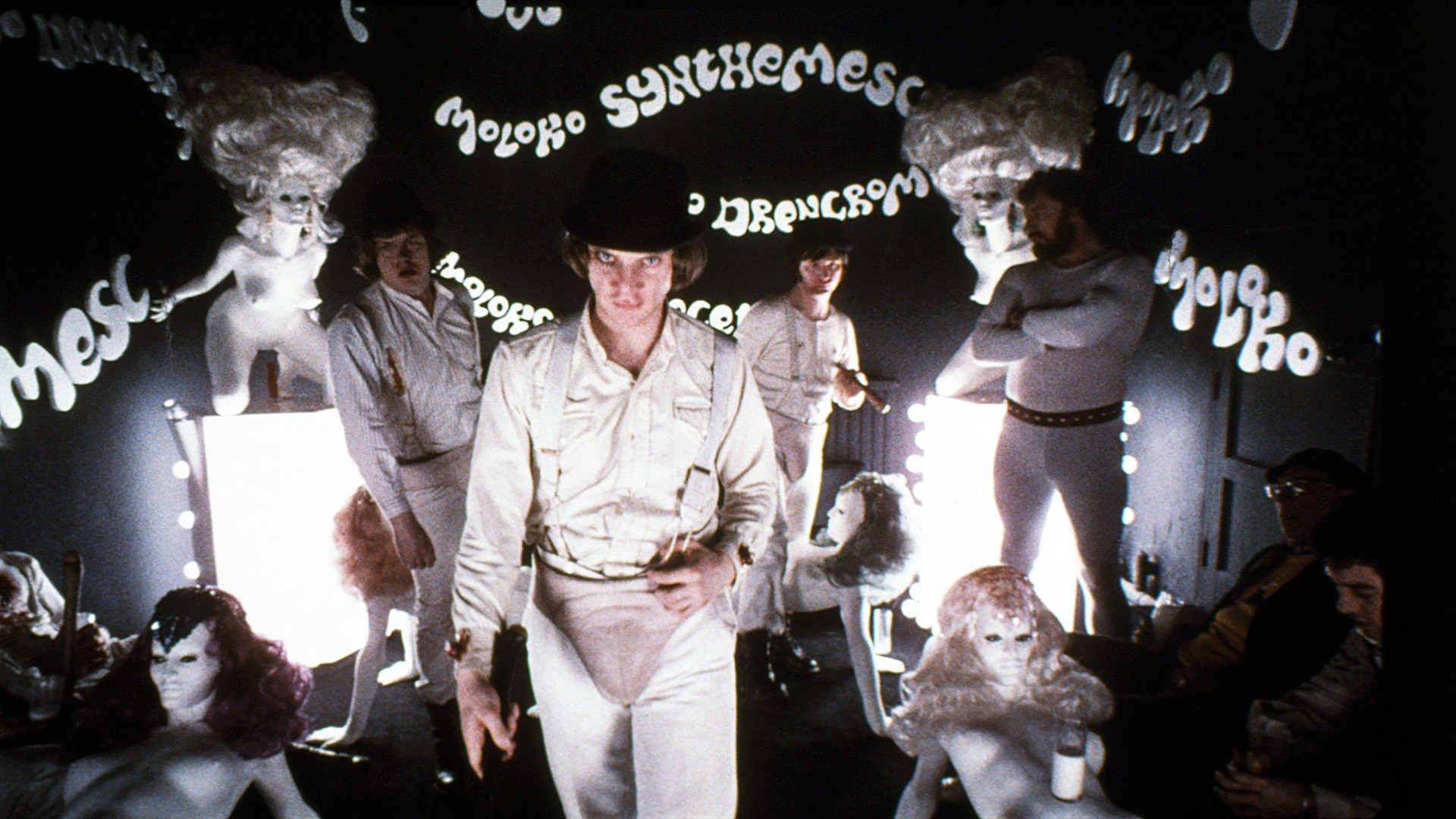 Committed to an unfiltered depiction of violence, the director did not shy away from filming scenes of ultra-violent depictions of rape, assault and psychological torment. These components, alongside its craft, set it apart from many pieces of filmmaking, even still to this day. A testament to the enduring nature of Kubrick, Burgess and the film’s consistent ability to engage new debate, its 4K re-release feels timely in a chaotic world that is coming ever closer to that seen on-screen.

Alex (Malcolm McDowell) spends his days scheming with his gang of ‘droogs’ in the milk bar on a drug-infused substance know as milk-plus. Narrated in voice-over by McDowell, the inner desires of Alex are openly exposed to the audience. Imbued with a distinctive costume by designer Milena Canonero, his all-white outfit and butler hat place him in an eerie timeless aesthetic.

After committing numerous heinous acts with his gang, one including the beating and rape of a woman whilst comically singing Singin’ In the Rain, the juvenile is caught red-handed by the police. Placed in a reform centre, one that illegal tests drugs to cure his devilish desires, Alex is manufactured by the powers that be into the perfect poster boy of transforming troublesome youths into normal law-abiding citizens.

Imbued from the outset with a vivid quality, Kubrick’s direction from cinematography to production design crafts an evocative film; channels humanities’ darkest desires. This tone is exemplary in the playful speeding up of Alex having a threesome, all in order to avoid the BBFC not giving the film certification. When watching A Clockwork Orange you are acutely aware of the director’s position as an influential voice in modern cinema. Nevertheless, overt themes of expressing the ID’s desires become tediously exploitative, specifically towards female nudity. Granted this seems to be Kubrick’s point, however, when digging deeper into the psychological games he played with his actors, it all feels a little too close to the bone.

The film utilises a similar technique of juxtaposing evocative imagery with classical music, as Kubrick mesmerically achieved in 2001: A Space Odyssey. Wendy Carlos’ captivating synth adds a new layer of modernity to proceedings. Producing the first all-synthesizer recording of classical music, Carol is a pioneer of the form. Distorting the familiar sounds through synth of Ludwig van Beethoven proves to become an essential thematic component to the film. As Alex slowly becomes a ‘‘normal’ citizen, his beloved Ludwig van becomes perverted into association with pain.

Though this is not the case for the viewer, any sense of recognition is stripped from his melodies in parts, thanks to Carlos. A similar technique has been adopted by numerous composers since recently notably in Barry Jenkin’s Moonlight thanks to composer Nicholas Britell and DJ Candlestick and OG Ron C (part of ‘’The Chopstars”). In the case of Kubrick’ film, however, its incorporation alludes to a vexatious musical scene of the 1970s, away from flower power.

Focusing on the enduring legacy of Kubrick’s technical craft, longtime collaborator John Alcott, alongside the voice-over narration, further interpolates you into this dystopian world. Such a notion is epitomised in one iconic POV shot position from the vantage point of a naked lady looking down on Alex kneeling and reaching for her breasts. Playfully referenced in Matt Groening’s The Simpsons, all from the perspective of Bart reaching for milkshakes, the cultural relevance of juvenile delinquency and A Clockwork Orange’s is embodied in this intertextuality. Lastly, the enduring nature of Philip Castle’s artwork to still be homaged, particularly in Ben Wheatley’s High-Rise.

Granted, the gratuitous nature of the hyper-violence is not for everyone’s stomach, including mine in moments. What is undeniable is the rigour to which Kubrick conducted his creative team, actors and himself to offer a new approach to filmmaking. As Burgess wrote in the novel “The colours of the real world only seem really real when you watch them on a screen” wholeheartedly matches Kubrick’s graphically engaging ninth feature.