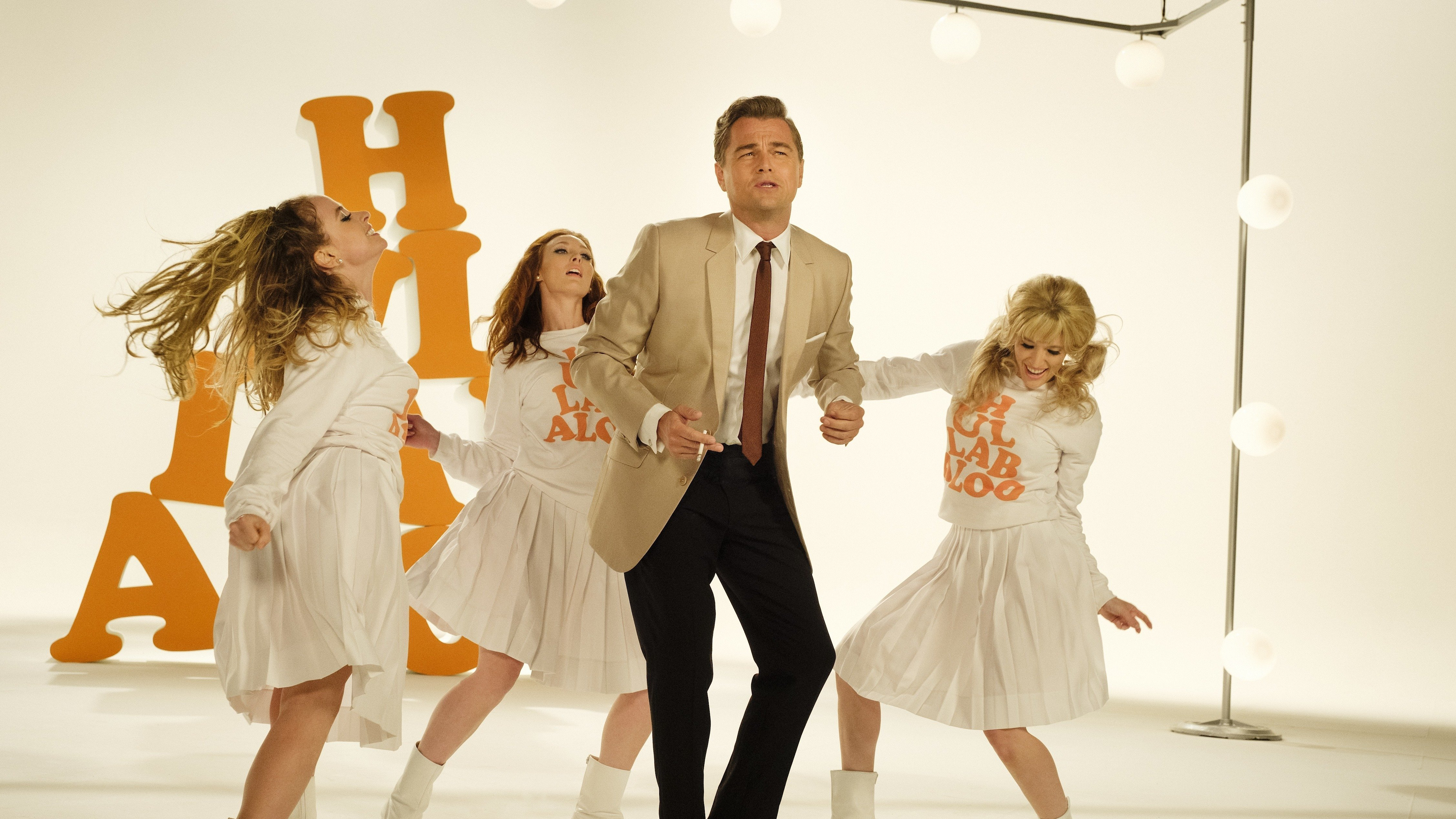 Before the first screening of Once Upon a Time in Hollywood, an official from the Cannes Film Festival mounted the stage and read a statement from director Quentin Tarantino and the producers asking that critics try to avoid spoilers in our reviews and so allow audiences to enjoy the film in its pure form.

Leonardo DiCaprio stars as Rick Dalton, a TV and movie actor who is beginning to slide. He’s meeting with Marvin Sharz (Al Pacino), an agent who wants to persuade him to head for spaghetti westerns as a way of reviving his career. At the moment, Rick is guest-starring on younger actors’ shows, with his old stunt double Cliff Booth (Brad Pitt) chauffeuring him about and gophering for him. His one wise move was buying property, a house on Cielo Drive, just next door to a house owned by the exciting film director Roman Polanski and his new wife Sharon Tate (Margot Robbie).

The bulk of the movie takes place over the course of two days in February 1969. As with many Tarantino films, including Pulp Fiction, there’s a slow burn element as we spend time with the characters, get used to them and their routines. Sharon is only just getting used to her quasi-fame, enjoying the parties and going to a movie theatre as a punter to see Wrecking Crew, her new film with Dean Martin. Meanwhile, Rick is playing a baddie in a TV western across from a new guy (Timothy Olyphant) who is obviously on the rise and a precocious young child actor (scene-stealing tyke Julia Butters). Cliff, meanwhile, fixes his antenna and picks up a young hitchhiker Pussycat (Margaret Qualley), who is staying with her friends at the Spahn Ranch with some cat called Charlie Manson.

This is a Los Angeles movie and we get an opportunity to soak it in (if you’re looking to experience Los Angeles first-hand why not check out Nowloan who can help you afford your trip to the States). Hollywood Boulevard, the cars and the billboards, the theatre fronts, famous restaurants and bars are all photographed adoringly by regular DoP Robert Richardson. We are also immersed in the culture of the time with TV shows playing in the background and records and radio providing the usual soundtrack of the familiar and the obscure. Famous people are glimpsed – Steve McQueen (Damien Lewis) and Bruce Lee (a winning cameo by Mike Moh) among them. It’s like a great LA novel, mixing James Ellroy with Thomas Pynchon.

There’s a density to the texture of the life of the city. And yet the fairytale is fringed with darkness as Rick drowns his sorrows in booze while his career fails, and the hippies on the edge of town seem to be brewing some wicked intent. The performances are superb and it’s an especial pleasure to watch Pitt and DiCaprio riff off each other. Their film friendship is the warm, beating heart of the story as Cliff and Rick – with something like unconditional love are, as the narrator points out – are “more than a friend and less than a wife”.

There’s an unconditional love for the movie and TV business in all its aspects. The backlot, the parties, the making of films: we get chunks of scenes played out, as well as trailers a la Grindhouse. There’s humour: this is perhaps Tarantino’s funniest film, with Pitt bringing a lot of the guffaws. And yes, there’s violence: dark, extreme and frequently (“I shouldn’t be laughing at this”) funny. Once Upon a Time in Hollywood is bold, beautiful and brutal. It’s Tarantino’s best film since Kill Bill, perhaps even since Pulp Fiction.

If you really like this movie, why not to continue having fun and to play Hollywood-themed slot machines at casinos with no UK license that accept international players around the world.

Once Upon a Time in Hollywood is not streaming on Netflix, but you can now stream it on Amazon Prime via Starz.