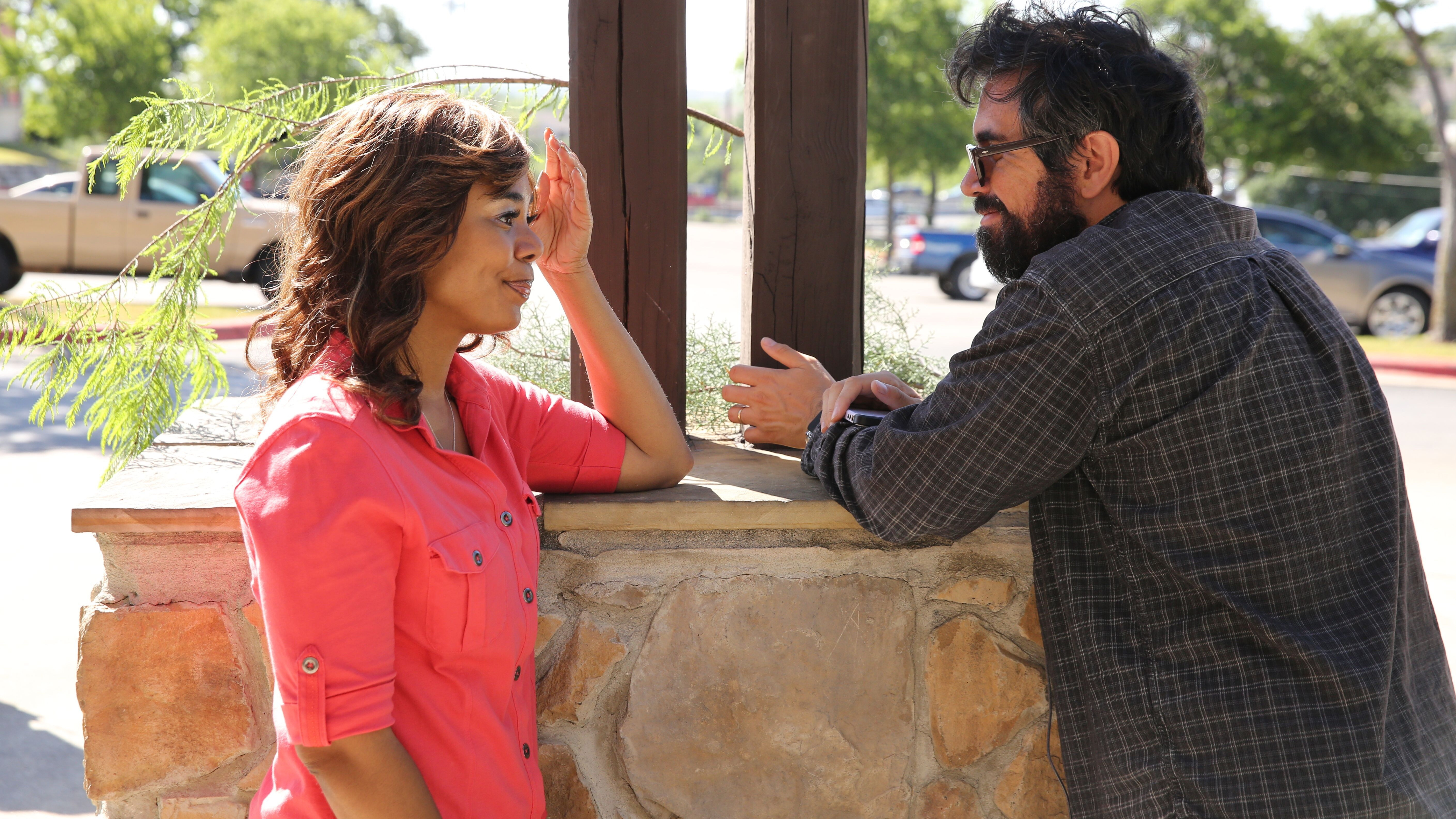 Mumblecore legend Andrew Bujalski’s latest film, Support the Girls, headed by the singularly brilliant Regina Hall, tells the story of a group of young women working at a Hooters-style bar in Texas. We sat down with the film’s director to discuss empathy, understanding, and the liminal spaces of the highway-dominated world in which the film is set.

CineVue: Your new film, Support the Girls, is about a group of working class women working in the service industry. From the opening scenes of the film, there’s a real sense of authenticity to the world that you create. What motivated you to tell this story?

Andrew Bujalski: I walked into one of those places (a Hooters-style bar) – they’re fairly common in the States, or they were – maybe a decade ago, and I’d always known they’d existed, but something about it surprised me when I went in there. There was something so peculiar, so uniquely American about it, and it wasn’t – because obviously they sell a certain raunchiness – but then you get inside and it’s not particularly raunchy at all. It’s more about comfort than anything else. There was something about the contradictions built into that, and totally how particular to our culture it is. I don’t think there’s any other culture on the globe in history that quite would have produced the demand for such a place.

CV: The bar’s manager, Lisa (Regina Hall), keeps repeating the phrase that “we’re mainstream”, almost like a mantra. Does she believe it?

AB: Sure, I think so. When I was trying to figure out this story and how I might find my way into this world, there was that character, that idea of an endurable optimist. First of all, that kind of character always appeals to me. And it also felt like the right way for me to get it. I knew that I was approaching the story as an outsider: I’m not and could never be one of the women who work there, and nor am I really one of the target market, either. So I couldn’t come at the story from either of those places, but I thought if I had this character who needed to see the good in the place, that could be my way of telling the story.

I think that I have that instinct as well, you know – more so now than ever. This is something that I started thinking about maybe ten years ago. In 2019, I don’t know if I would have had the bravery to take on this story today; I was conceiving it in a very different world. The idea a few years ago, that these places are just full of human beings just trying to get through their day one way or another, and that there’s – it’s very easy to judge people for any number of reasons but to me it’s more interesting to meet them where they are.

CV: Right. There’s a lack of judgement – the film is clearly on the side of the girls – but there doesn’t seem to be much judgement of the morality or the gender politics of these kinds of places.

AB: Sure. Of course the women in the movie are the lead characters, and the ones who have our attention and our sympathy. I know that some people have looked at the movie and said “well, this is an indictment of men”. It’s fine for people to interpret it this way, and not entirely inaccurate, but it’s certainly not what I set out to do. It just wouldn’t occur to me as a writer to sit down and say, “let me indict men!” As flawed as all those male characters are, I had to have sympathy for them as well, otherwise there was no way for me to tell the story.

CV: Right. The film doesn’t feel overtly political, but had you set out to make a political statement with the film?

AB: I think everything is political, depending where you’re standing. I think my dramatic instincts are the same as political instincts in as much as they’re both about trying to listen to people, trying to understand where they’re coming from. It’s always a question for me, it’s always an exploration. I don’t think I’ve ever sat down to write a movie thinking, “I know what needs to be said here, and I’m going to say it: I’ve worked everything out here so let me tell you”. I usually start with questions that I don’t know the answers to – the movie is a way of asking those questions.

CV: So it’s that sense of coming in as an outsider but not assuming that you know everything already.

AB: Yeah. And I think that was a pretty uncontroversial approach a few years ago. It’s an interesting time to be living in now because I think even just these basic notions of empathy – there’s a question of whether or not that’s useful – in contemporary society anymore, or if that’s a crutch and it has to go, and we all have to stand up and say, “I know what’s right, and you’re wrong.” I certainly don’t know the answer to that either, and for better or worse I’m always going to be the guy standing in a corner saying “I’m not sure”. Maybe that will get me put up against the wall and shot someday, but we’ll see.

AB: Even going back to my first movie [Funny Ha Ha], when I was making it seemed like the most inoffensive thing I could have imagined, you know. A pretty simple story about a young woman trying to find her way in the world. I’ve never been a provocateur, but even with that first movie, it really infuriated people who were expecting something different, who want to know who the good guys and bad guys are.

CV: Right – Support the Girls doesn’t really have good guys and bad guys either, though there is there are a few male characters who Lisa comes up against. You’ve said that the film wasn’t intended as an indictment on men, but did you feel that you needed to include those kinds of characters in order to create empathy for the women in the film?

AB: It wasn’t so much a dramatic engine thing. I thought those kinds of stories and those kinds of situations were reality. A lot of the writing process for this was gathering – I went and sat in a lot of these places and tried to keep my eyes and ears open and then there was a lot of imagination too. Certainly, none of the situations [Lisa finds herself in] are uncommon. But even with those characters or situations where someone is clearly in the wrong, you still have to find a way of getting into that person’s head.

CV: And then you’ve got the people in the middle, like Lisa’s boss, who at times is quite unsavoury, but there is a degree of sympathy there too – he’s trying to run a business, being outdone by the bigger fish in the industry.

AB: The key to him, and certainly what I thought about a lot with James le Gros, who did such a great job was – that guy more than anyone else – his engine is self loathing. It doesn’t make bad behaviour more excusable, but that’s where he is.

To some extent you can’t understand what everyone else is going through. But always what motivates me as a filmmaker and as a storyteller is a fascination with things that you can’t understand. You can spend every day with somebody and still see behaviour that baffles you. That’s where a lot of my, a lot of all of our, mental energy is, living with each other and wanting to understand.

CV: It’s almost as if the characters are on a similar journey to the one that you were on when you were making the film, where your whole approach to writing the film was trying to meet people in the middle and trying to understand them.

AB: A big part of the story for me was asking what is the value of good intentions. You have Lisa, who for better and worse has projected a kind of idealism on to the place. She’s determined to see the best in her girls and her customers, and that very frequently blows up in her face. Almost without fail, most of what she tries to do to help or make everybody’s lives better turns around and bites her. So I think the big question for me is, what is the value of that? Has she still put something good in to the world even though things haven’t worked out? I’m not sure what the answer is but I think I learn a certain way on this, and that shaped a lot of the structure.

CV: Sure. The final sequence, without spoiling it, come to a quite ambivalent resolution. Might we see more of these women?

AB: As a storyteller, this was initially something I conceived of as a TV series, but then when I was able to go back and claim it as a feature, that was helpful for me because I really like endings. I find them a very useful organising principle. For me, a movie is always a poem, it’s about lining up the elements and getting them to resonate with each other, so I get a little panicked – without an ending I don’t know how they resonate. So I will say, for me as a writer, I didn’t really know what the story was until I knew how I could end it. Of course the characters live on, but at that point it’s out of my hands: then they belong as much to the audience as they do to me.

CV: The film has some really nice visual touches. The opening sequence has all those shots of a mundane highway and the bar is set in this place that isn’t quite a city, but not quite the middle of nowhere. What was your approach to building this world?

AB: Well, it certainly takes place in highway world! That certainly feels American – I don’t know if you quite have that [in the UK] – there is so much of a universe that exists purely on highways, where it’s kind of nowhere. We shot the movie in Texas, and certainly there is a Texan feel to it, but it wouldn’t really be that different in any of the other forty seven continental US states – highway world is kind of the same everywhere here, and there is somewhere inherently liminal about it. That was appealing to me because it wasn’t something that I’d seen much of. It exists in movies but I liked the idea of setting the movie almost entirely in that space which is kind of nothing.

Support the Girls is out now in UK cinemas. Read our review of the film here.