Film Review: King of the Cruise 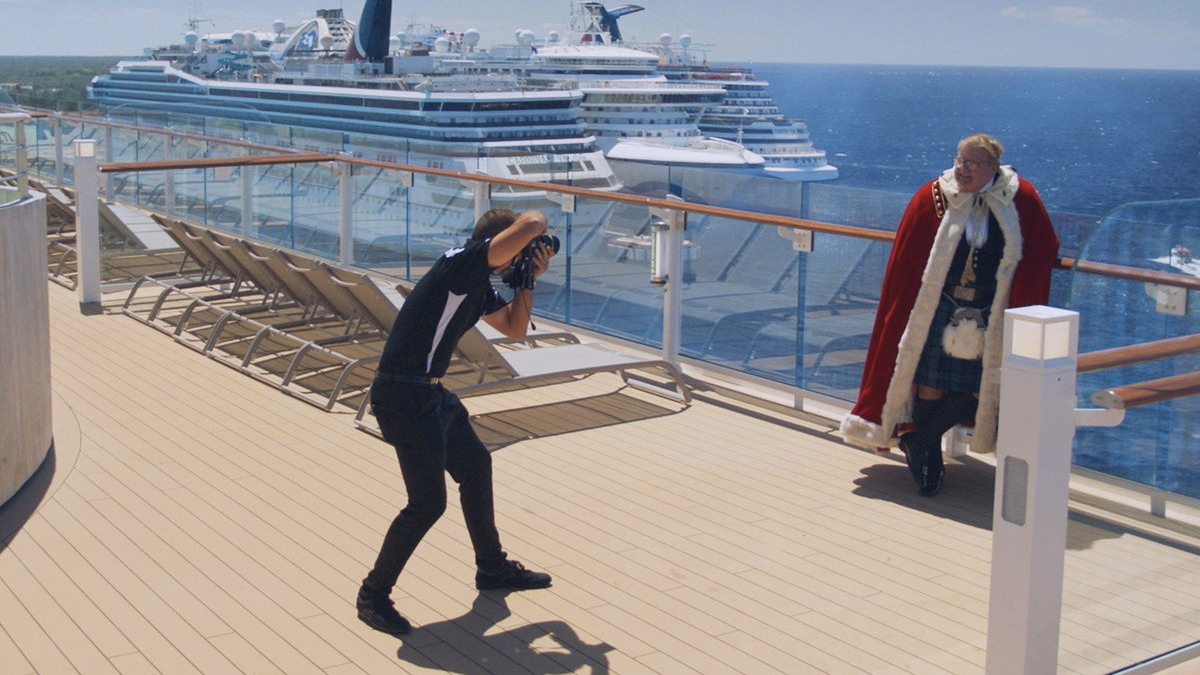 Baron Ronald Reisinger lives a life of indulgence, flaunting his status and dining in style on an ocean liner. Yet he is curiously solitary. King of the Cruise, the latest film from Dutch documentarian Sophie Dros, is at once a singular portrait of defanged nobility and a complex, patient exploration of loneliness.

Anyone who has ever poured a pint or dusted a cappuccino will know the deadening tedium that descends when some dreary bloviator, convinced he is interesting, traps you in his tractor beam of bullshit. At first, as he chats away happily to bored cruise staff, it seems that Ronald Reisinger, Baron of Inneryne, Scotland, and ceremonial King of Beffeche, Senegal – Ronnie to his friends – is going to be just such an Alan Partridge-like figure of fun, devoid of self-awareness and interested only in regaling strangers with overblown half-truths about his own tawdry exploits.

But Dros, director of King of the Cruise, has dedicated her career to resisting such cruel oversimplifications. What could be a cynical lampoon of a fading, self-pitying millionaire, in fact, has a good deal of warmth and sophistication. For the Baron has, indeed, had an interesting life. He claims to have been worshipped as a god and to have injured himself playing elephant polo; whilst reading up on him a little, I learned that he lost an eye wrestling a crocodile. He has lived through extraordinary times, too, including the end of Scottish feudalism in 2004, which reduced his titles to ceremonial niceties. He might not, after all, be wrong to consider himself interesting, or, as he puts it himself, “an entertainment”.

And yet, one has to wonder what he is doing alone on a cruise. With a slow generosity, Dros’ film gives us glimpses into Reisinger’s life story, his character, and his indefatigable commitment to telling literally anybody who will listen that he’s a Baron. What emerges is a character portrait of startling nuance, a light-touch profile worthy of more established and celebrated documentarians, Errol Morris perhaps. By turns avuncular, vulnerable, reflective, and melancholy (and undoubtedly a little narcissistic), Baron Reisinger (not mister Reisinger) discusses his obesity, his royalty, and his mortality with patiently cultivated candour.

Stylistically, the film is wonderful. The cruise ship and her inhabitants – passengers and staff alike – are photographed by DOP Boas van Milligen Bielke with a rare, studied elegance, and, when combined with the pleasantly numbing Love Boat soundtrack, the visuals very powerfully conjure the snoozy, sozzled insouciance of cruise ship life. The compositions are inventive and beautiful, the long-takes hypnotic; at times, the film oozes sleepy, vacant ennui like Reisinger’s cheeseburger and hot dog combo oozing stale ketchup.

King of the Cruise is a lavishly shot and expertly constructed documentary film. Whatever you think of Ronnie – whether you think he is charming, perhaps a little tragicomic, or a shallow, Partridgian bore after all – the quality of the craftsmanship on display here is difficult to deny.

Sophie Dros’ The King of the Cruise is available on demand in the UK, US and Canada. dogwoof.com