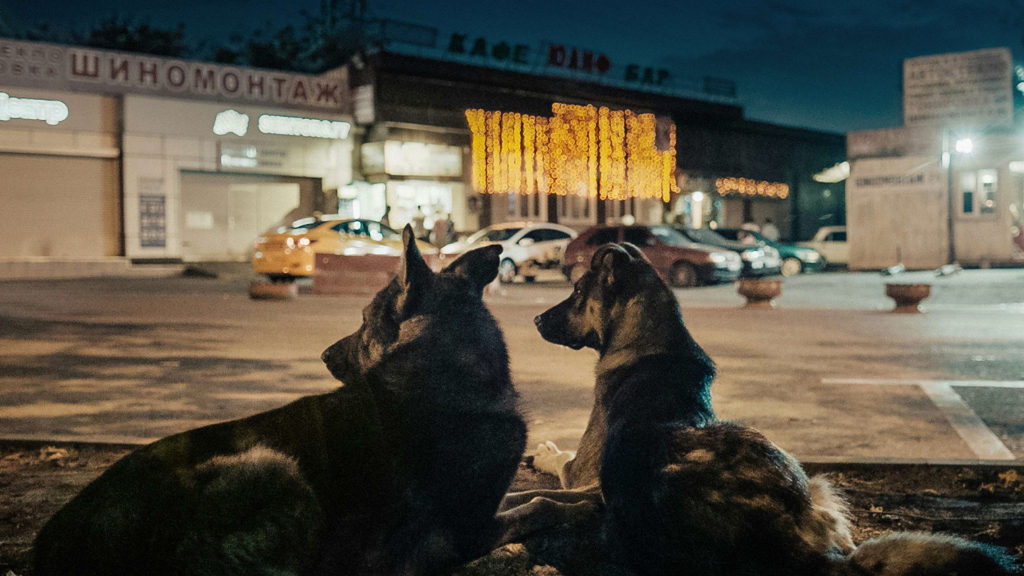 We’ve already had First Man and Apollo 11, but the renewed interest in the space race prompted by the lunar landings anniversary gets its weirdest entry yet with Elsa Kresmer and Levin Peter’s impressionistic documentary Space Dogs.

There is a legend, Alexey Serebryakov’s voice tells us, a voice deep and rich in Steppes born melancholy and Russian fatigue, according to which Laika, the first Earthling to enter outer space, returned to Earth as a ghost and prowls Moscow reverting to his former occupation of a street dog. This is the premise for a fascinating impressionistic documentary by Kresmer and Peter. Like Disney’s The Incredible Journey, if it had been directed by Andrei Tarkovsky, we get a dog’s eye view of the city as a pair of scruffy street denizens snap and snarl their way through their version of the Zone from Stalker, licking cars, scavenging for food and meeting a very unfortunate kitten.

This latter episode prompted walkouts and serves both as a provocative tester and a way of banishing the Disney comparisons for good. We will see cruelty by humans towards animals, the exploitation of a chimpanzee as a party prop, the more seriously physically vile experiments carried out on the space puppies, but here we also see that animals are cruel to animals and if you can’t countenance that fact then your understanding will be necessarily partial. However, the scene is also long and distressing and walking out is a valid reaction.

Interspersed with the canine meanderings in the city, archive footage shows a barking dog in a space capsule and the selection procedure for dogs to go into space. Laika and others didn’t survive and were never supposed to, but some did return to Earth and a pair of survivors were even mated and their puppies handed out as trophies. Later there is even the remarkable story of two tortoises who are sent on a lunar mission that misfires and sends them on a trajectory out into space forever. Back in Moscow, two counterparts find themselves in nervous vicinity of the street dogs.

The alienness of humanity, when seen from another perspective, is evident throughout the film. In this sense, the documentary feels akin to that other animal rights-inspired science fiction offering, Jonathan Glazer’s Under the Skin. Here intelligent life does exist in the universe and we are being watched and being – to some extent – judged.