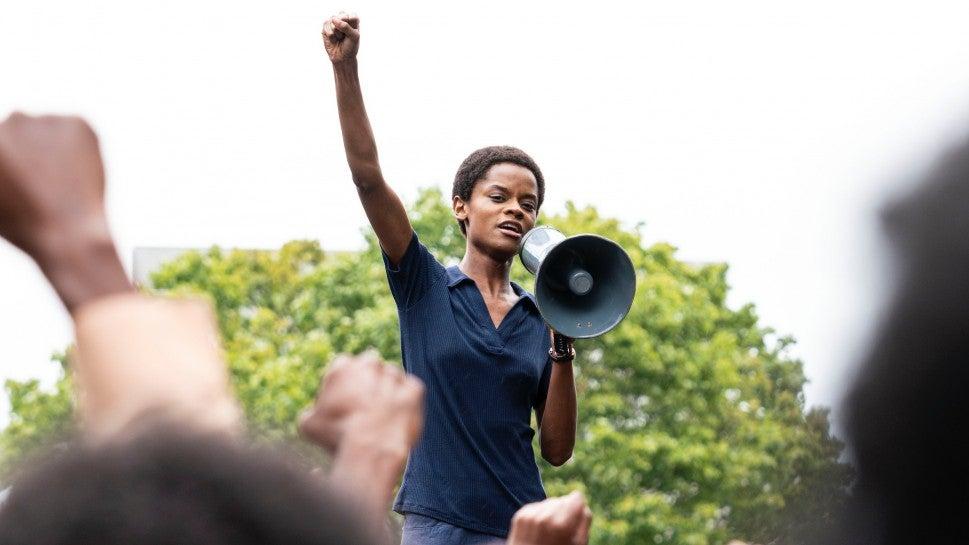 Taking a sledgehammer to institutionalised racism with the clarity of purpose and skill of a master craftsman, Steve McQueen is once again at the very top of his game, and indeed his profession, with Mangrove. Constituting just one instalment of the five-part Small Axe series, this film is a towering achievement.

Chosen as the BFI London Film Festival’s opener, Mangrove is an historical love letter to London’s West Indian community and a clarion call for the continued contemporary struggle against prejudice and injustice. For though the events depicted in Mangrove took place between 1968 and 1972, the ripples of discussion and dissent that began in a Notting Hill restaurant over fifty years ago are still being felt, and fought, in Britain and across the world today. The film’s title, taken from the name of a cosy eatery on All Saints Road, would later be attributed to the Mangrove 9, a group wrongly arrested and tried for ‘riot and affray’ during a demonstration against police brutality and persecution.

Owned and run by Frank Crichlow (Shaun Parkes), the Mangrove is as warm and welcoming as the spicy Trinidadian food they dish up. “This is a respectable restaurant […] not a battleground,” says Frank, doggedly determined to create a cleaner image for his new venture after a former club is accused of illicit activity. But pre-conceptions about both man and business linger, at least in the eyes of local police constable Pulley (a sneering, slippery Sam Spruell), whose bigotry and personal vendetta against Frank lead to repeated, unjustified raids on the premises.

For locals that use it as a meeting point, the Mangrove is a haven, a vital part of a community under increasing menace and its plucky resilience and never-say-die attitude mirrors their own. McQueen’s affection for this place, this people and this milieu are immediately apparent. From its opening frames, a smoke-filled bar where men are gambling on dice, the film’s rich, tangible aesthetic, to the sounds of reggae and steel drums, is one that we want to reach out and touch, to immerse ourselves in. Shot on 35mm film by Shabier Kirchner – who worked on each of the Small Axe projects in various mediums – Mangrove’s granular visual texture is reinforced by Lisa Duncan’s excellent period costumes (turtlenecks and leather jackets-a-plenty) and Helen Scott’s stellar work on the production design.

Transported back to west London in the late 1960s by these elements, the racial slurs and graffiti are as poisonous to hear now as they were accurate for the time. The script, which McQueen co-wrote with Alastair Siddons, pulls no punches and lands its heaviest blows at the time of the trial. The baseless charges and trumped-up evidence against nine men and women from the community see them summoned before the Old Bailey. And it is here that McQueen, and most notably his cast, really excels.

You would be hard pressed to name many other directors currently working that garner such exceptional performances from his or her actors. Mangrove’s ensemble is uniformly impressive, but special mention must go to Letitia Wright, as leader of the British Black Panther Party Altheia Jones-LeCointe, Malachi Kirby as activist Darcus Howe, and Parkes in the lead role. Wright is a firecracker of conviction, passion and spirit whose tempered eloquence explodes on a number of occasions to devastating effect. Kirby, whose character’s outspoken criticism of the broken white establishment initially divides opinion among the group, delivers one of the finest, most stirring monologues in recent memory as the trial draws to a rousing close.