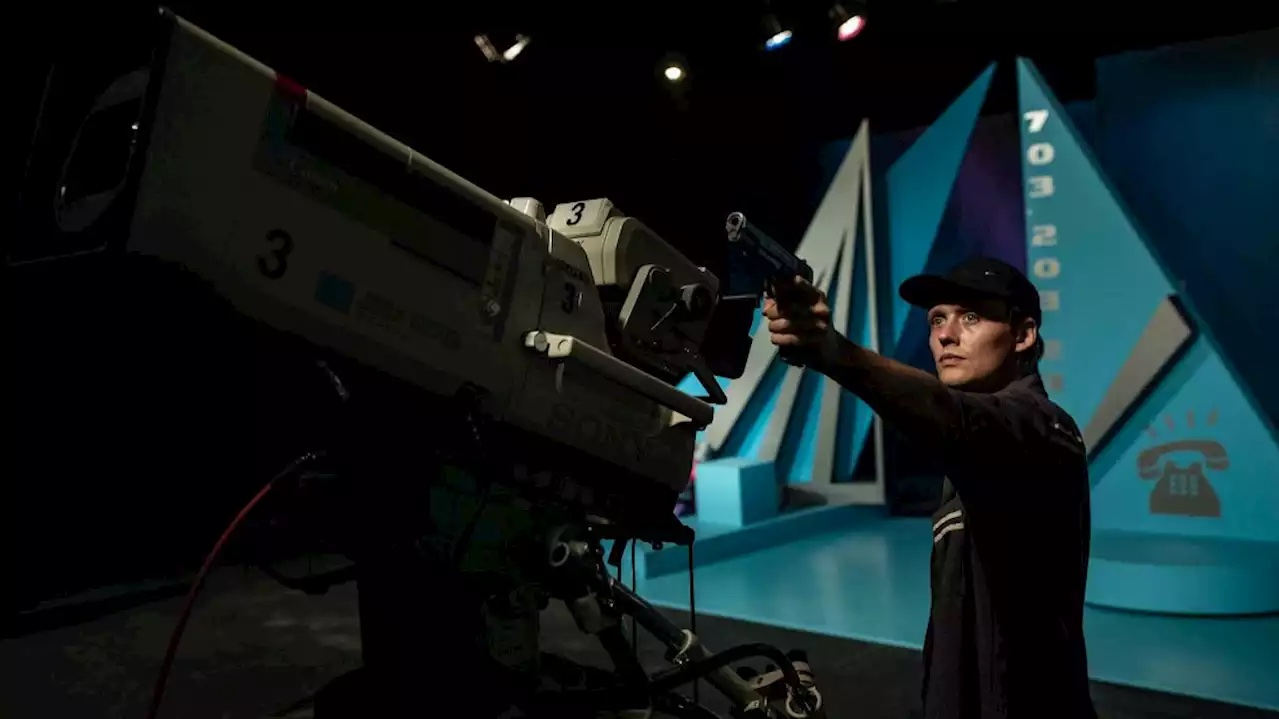 Co-written with Łukasz Czapski, the script pits lone gunman Sebastian (Bartosz Bielenia) against an unnamed media company on the big night. Though his motives for taking two hostages in a television studio are unclear, Sebastian’s demand for live airtime amid the confusion and anticipation of Y2K celebrations is earnest. Early stylistic signs are encouraging. The film’s first image is an exterior low angle shot of Sebastian smoking in front of an enormous high-rise building, followed by the title emblazoned in striking red lettering across the screen.

It’s a bold, bracing opening and the rhythmic ticking of a stopwatch – or is it maybe a bomb counting down? – also raises the pulse a little further. Cinematographer Michal Luka’s handheld camerawork is to be applauded. Up close and personal throughout the film, it heightens the claustrophobic atmosphere and Sebastian’s fraught, desperate state of mind. It is a pity, then, that though the initial mystery surrounding his reasons may be intriguing, Piatek strings this out for far too long without ever providing sufficient fuel to stoke the fire. Having suspiciously, and all-too-easily, subdued security guard Grzegorz (Andrzej Kłak) and forced his way onto stage, gun in hand, Sebastian interrupts a call-in contest hosted by TV personality Mira Kryle (Magdalena Poplawska).

After the initial dismay of this shocking invasion and plugs being quickly pulled, the relative calm with which producer Laura (Małgorzata Hajewska) and her team react to the deadly situation is odd. When the police negotiating team makes little progress in talking Sebastian down, they stall for time and ‘technical difficulties’; so, alas, does the action. There’s a lot of standing around and a lack of impetus which means interest and anticipation wain somewhat after the first act. A phone call to David – a friend or perhaps a lover – suggests Sebastian’s actions are personal, a grand, intimate gesture in the mould of Dog Day Afternoon. But this thread, too, is put down and not picked up later on.

Prime Time’s strongest moment occurs when Sebastian is confronted by his father (Juliusz Chrzastowski) from the control room. It is a bitter, demeaning exchange in which the young man’s stutter is cruelly maligned. Though Sebastian may be uncomfortable (for reasons largely unknown to us) in his own skin, Bielenia deserves credit for his haggard, anguished, but assured performance. Following his outstanding turn in Jan Komasa’s Corpus Christi, he is no doubt a real talent to look out for in the future. Intermittent cuts away to celebrations elsewhere, paranoia surrounding the millennium bug, and adolescents uncertain over what the future holds for them provide context for the mood of a nation at a pivotal moment in time, away from the now hermetically sealed studio set.

But with so much on – frequent shots of banks of screens showing different channels simultaneously – there still appears to be nothing to watch. There may be a lot of nothing vying for its share of the airwaves, but Sebastian’s all-important address – scribbled on several pieces of paper which he toys with frequently – still struggles for an audience. There’s no questioning that there are flickers of great ideas in Prime Time. Sadly, they are hinted at, alluded to, rather than being fully fleshed out to resonate. Does the fact that the siege is rather anticlimactic echo the damp squib that the year 2000 turned out to be after its cataclysmic billing? Are we witnessing the first signs of media moguls controlling “The Message”, and belittling the common man? Elements to ponder as the lights come up, as unfortunately in spite of early signs of tension and promise, Prime Time is a misfire.