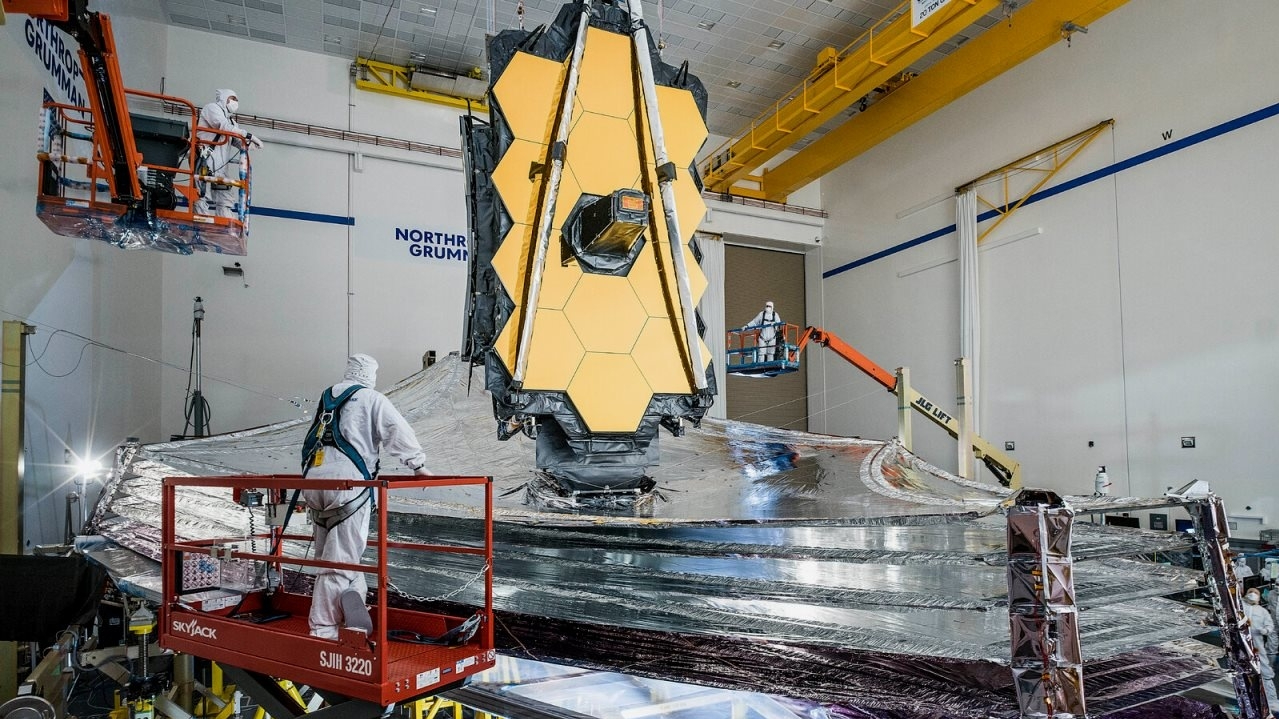 Scheduled for launch at the end of October 2021, the James Webb Space Telescope will set the distant red star Trappist 1 – and its potentially habitable exoplanets – in its sights. Its objective? Peering into deepest space to answer one of mankind’s greatest unknowns. “Do you think there’s life out there?” MIT astrophysicist Sara Seager is asked at a NASA congressional hearing in 2013.

One of the key voices in Nathaniel Kahn’s The Hunt for Planet B, her testimony and research – paired with the expertise of many other colleagues – are elements that feed into the telescope’s construction, testing and preparation for launch. Around this nail-biting, pioneering through-line orbit ideas and schools of thought reaching back 400 years to Galileo’s first observations of the stars, past conspiracy theories of alien invasions, and as far as thirty-nine light years away where life may, or may not, be sustainable. Humbling, awe-inspiring and frequently head-scratching, like a solar system mobile, Kahn’s film has a bewildering number of moving pieces.

Thankfully, his assembly of the extensive material at his disposal is as precise and measured as the skilful thousand-strong team working on a telescope 1000 times more powerful than the Hubble. Conscious that the scope of this documentary, and facts and figures at play that are enough to make even keen scientific minds spin, Kahn’s film neither patronises nor plays down the genius of the people whose work we observe. Breaking down equations and intergalactic mathematic principles into bite size chunks for the laymen among us, System Engineer Amy Lo’s Lego model of the James Webb Telescope is one example of the passion and patience needed to spread the far-reaching knowledge.

But for all the nuts, bolts and ideas like being able to pick up a bumble bee’s heat signature on the surface of the moon from Earth, Kahn also uses The Hunt for Planet B to ask pressing, expansive existential questions. “Maybe we should be interacting with life on our own planet in a more meaningful way,” says UCL’s Nick Lane, interviewed at the Grant Museum in London. Instead of looking to the heavens, should we not be paying closer attention to averting – or at this stage lessening – the impacts of climate change? Taxpayers in Antigo, Wisconsin may well find it hard to relate to billions of dollars spent on a telescope when storms – increasing in power and frequency – bring trees down through the roof.

“We’re not doing religion here, we’re doing science.” affirms Jill Tarter. Dealing in certitudes only, the famed astronomer, upon whom Jodie Foster’s character in Robert Zemeckis’ Contact was based, positions hope and faith in direct opposition to fact and understanding; musing on such conflict will leave viewers in a daze of post-film reflection. In preaching to neither choir nor converted, The Hunt for Planet B lays out open-ended hypotheses which will likely spark debate, disagreement – and that is a good thing. Pushing the boundaries of exploration and the human species’ desire to further itself, to reach out and communicate with whatever – or whoever – may be out there, above all the film champions the work of these extraordinary people.

And with that in mind, there are moments in Kahn’s film that are deeply moving. The culmination of a lifetime’s work – and in some instances tragic loss – for many, it underlines how through determination, diversity, collaboration and togetherness, extraordinary progress may be achieved and a light shone into the great, dark unknown.