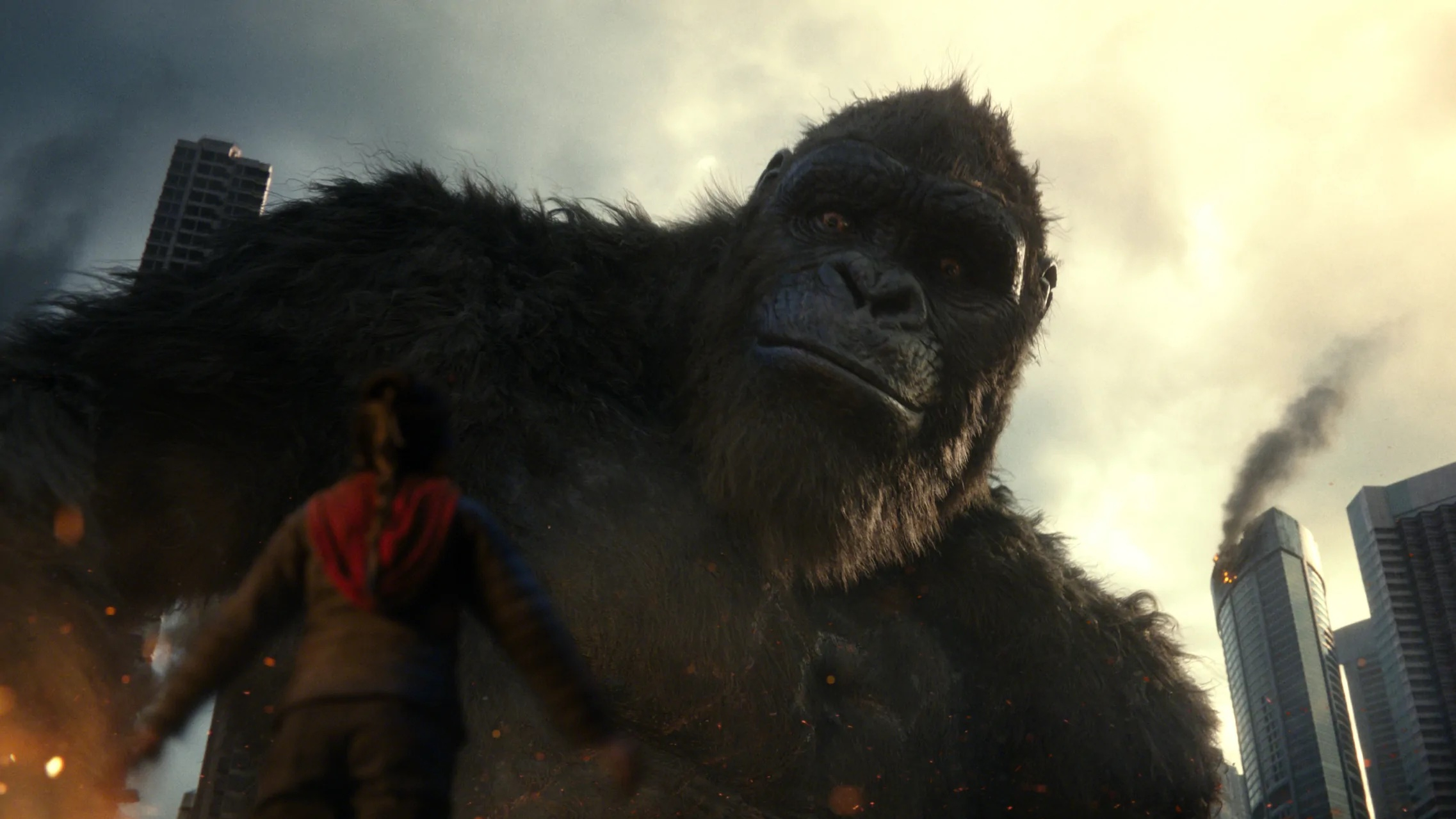 Two years after Godzilla took his place as the alpha kaiju, old atomic breath has gone to ground. Meanwhile, the simian king of Skull Island has been contained in a Truman Show-esque monitoring station after a storm destroyed his home and killed all but one of its human inhabitants. When Godzilla resurfaces to destroy a secret scientific research installation, humanity must enlist Kong’s help to challenge the King of the Monsters.

Taking over directing duties from King of the Monsters’ Michael Dougherty is Adam Wingard, also from a horror background. Legendary’s approach of hiring different directors for each instalment of their so-called Monsterverse has yielded some pretty terrific results, from the towering scale of Gareth Edwards’ franchise starter to Jordan Vogt-Roberts’ pulpy invocation of Vietnam in Kong: Skull Island, and even the elemental sublime of Doughtery’s stormy King of the Monsters.

Unfortunately, Godzilla vs. Kong proves to be the blandest effort yet, both visually and aurally. Junkie XL’s score for the warring titans hints at Godzilla’s classic theme but never gets out of the starting blocks. The visuals are a lot cleaner than King of the Monsters‘ but ultimately less exciting, while the production aesthetics – variously recalling previous Monsterverse instalments as well as The Lost World, Tron and Pacific Rim – comes off as derivative and incoherent. Cinematographer Ben Seresin devises some lovely shots, especially of Kong, yet the sense of scale evoked in these moments is lost by an unanchored virtual camera moving around the action with little sense of physical grounding.

Despite getting second billing, this is Kong’s movie, and it’s clear that’s where Wingard’s heart lies, with a few nice little nods to the gargantuan gorilla’s cinematic past. What’s missing, however, is a true sense of awe for either of the title characters. Indeed, the infectious affection for original Toho series that balanced the flaws of previous instalments just isn’t as evident here. Wingard makes a game effort of evoking sympathy for Kong through second-act journey to the centre of the earth to search for a new home, but having him tamed and in chains reduces the beast once killed by beauty to an oversized pet.

Godzilla is treated with none of the terror of Edwards’ film nor the fanfare of Dougherty’s. Much like Godzilla 2014, Godzilla vs. Kong makes us wait to get a good look at King Kaiju, but nothing here feels like it’s building towards anything: instead, we’re just left waiting while the script plays for time. Indeed, in functioning as a sequel to both Kong: Skull Island and Godzilla: King of the Monsters, not to mention a loose remake of not one but two classic kaiju films, Godzilla vs. Kong suffers from a surfeit of plot and not enough story.

Perhaps the film’s most fatal – and illuminating – error is in its atrociously written characters. These films have never exactly plumbed the depths, but there have always been moments – Bryan Cranston’s gut-wrenching farewell to his wife, or Serizawa’s (Ken Watanabe) moment of tremendous closure in King of the Monsters – that caught glimpses of real humanity. There is nothing at all like that here, nor is there anything as colourful as Charles Dance’s moustache-twirling or the fun portent of the edict to ‘let them fight’. Instead, Godzilla vs. Kong casts wastes Kyle Chandler in a glorified cameo and casts Brian Tyree Henry as a one-dimensional conspiracy theorist – a bizarre decision given the political and social contexts in which the film was been produced.

None of this is to say that Godzilla vs. Kong is unwatchable. Quite the opposite, in fact, with plenty of neat ideas and exciting moments to be found underneath all the narrative contrivance. And on the climactic showdown – essentially a redo of the last film in better weather – the film undoubtedly delivers, with all the monster thumping and building smashing that we could want, not to mention a not-so-surprise late appearance from a classic adversary. Nevertheless, fresh ideas and a sense of the sublime appeal of seeing impossible creatures knock seven bells out of each other is needed if this gigantic franchise is to live to fight another day.