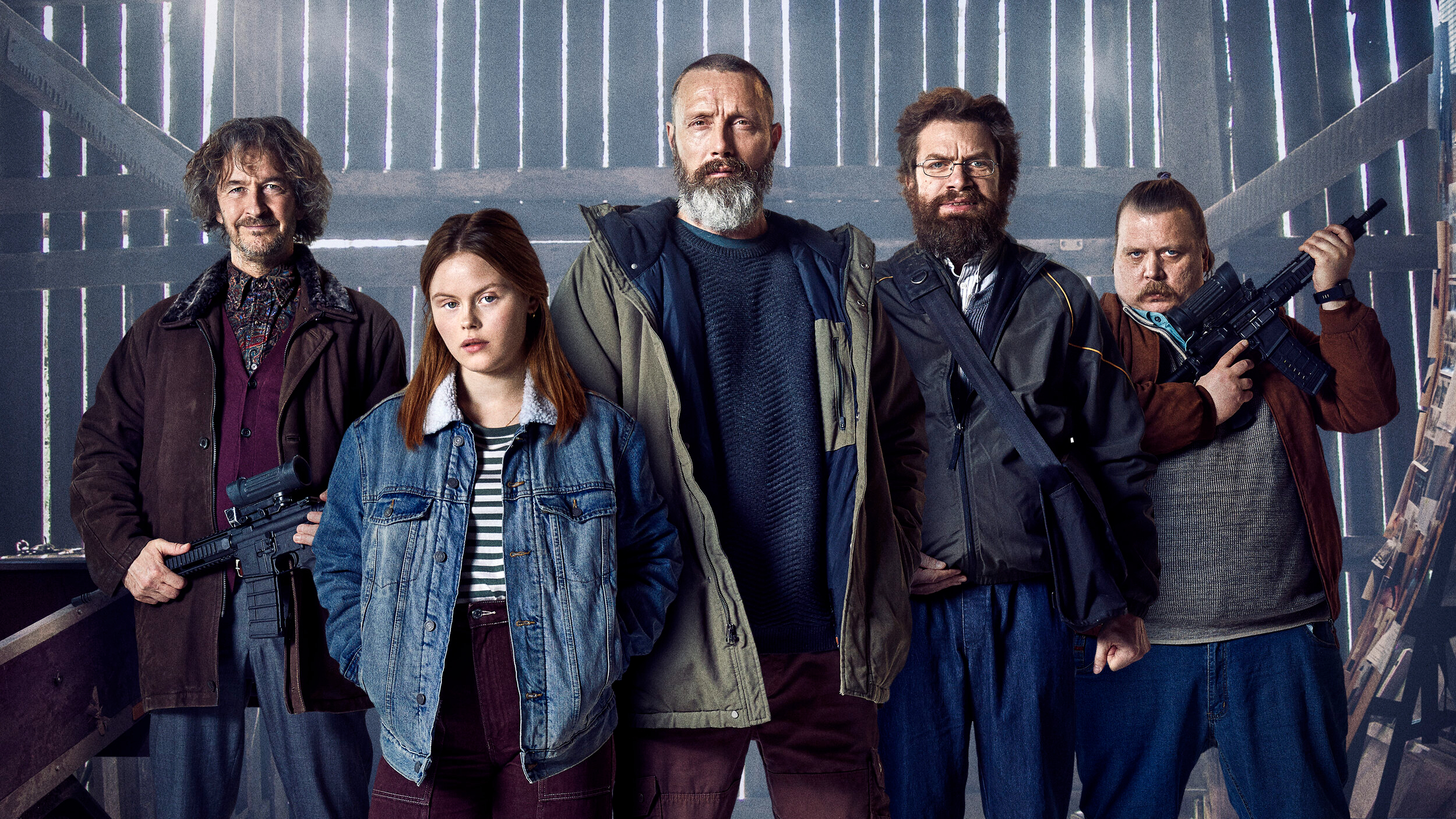 The old saying goes that a problem shared is a problem halved. The maths of this is not an exact science in Anders Thomas Jensen’s Riders of Justice, but an unlikely band of misfit brothers in arms – a soldier, hacker, statistician and IT whiz – unite to avenge the brutal violence of a biker gang in the Danish director’s latest genre-twisting feature.

But just as doubt is cast upon whether a train crash, which takes the life of Markus’ (Mads Mikkelsen) unsuspecting wife, was an accident or deliberate hit to eliminate a witness ahead of trial, there is layer upon layer of ulterior motive and misdirection here. An expertly handled plot, interweaving lives, coincidence, past trauma and circumstance, is concerned with far more than mere bloody vengeance. Five years since the delirious oddity that was Men & Chicken, Jensen gets members of the old band back together for a thrilling, poignant film which sees writer-director and cast on top form.

Mikkelsen, who dances his way from Thomas Vinterberg’s Another Round to this latest collaboration with Jensen, is a close-cropped, but heavily bearded military man who returns to Denmark from a distant posting. He must pick up the pieces of his life, and reconnect with his daughter, Mathilde (Andrea Heick Gadeberg). Written with far more depth and narrative significance than a grieving adolescent reliant upon her father for support, she is the first to see that repeated six-packs and lashing out will not help Markus grieve.

Piecing together the steps which led to her mother’s tragic death, Mathilde’s bedroom wall post-it notes catalogue the actions and equal reactions which brought us to this point. Having opened in the same vein as the fantastical, fairy tale-style of Jensen’s former film, but with the same off-kilter sense that something is decidedly not right, a young girl’s wish for a blue bicycle for Christmas sets dominoes falling. The slicing of a chain – to Mathilde’s bike, which is stolen – is the first broken link. Can the following sequence of events be understood – and by extension can some reasoning be attributed to why their mother and wife was so senselessly lost?

If Mathilde seeks answers, a war-torn Markus – coiled with rage – is out for blood. Unable to do this alone, hilariously self-proclaimed “overly intelligent charlatans” Otto (Nikolaj Lie Kaas), the numbers guy, and information guru, Lennart (Lars Brygmann), are members two and three of this oddball A-Team. Nicolas Bro completes the pack as surveillance specialist Emmenthaler. Undertaken with a playful, ironical nod to heist or revenge thrillers assembling their specialists, Riders of Justice certainly doesn’t laugh in the face of its unusual crew. Excising far more than simple revenge, each of Jensen’s superbly well-rounded characters has a different (often improvised) role to play in the collective recovery, and their own axe to grind.

Sexually abused, mocked and outcast for being overweight, or trying to atone for a grievous error of judgement in respective pasts, the sense of purpose which comes with channelling pent-up anger and loss, to bring down the titular gang, takes a different form for each man. Probably best to just get it done quickly, so they can go home for some banana cake, though. The tender portrait of each character’s reasons is as affecting as the writing – and indeed its delivery – is often outrageously funny. A showdown to rival any great western brings Riders of Justice to a heart-stopping climax and a conclusion which shows that physical strength and emotional toughness do not always go hand-in-hand. It’s OK not to be OK and reaching out for help is never a sign of weakness.