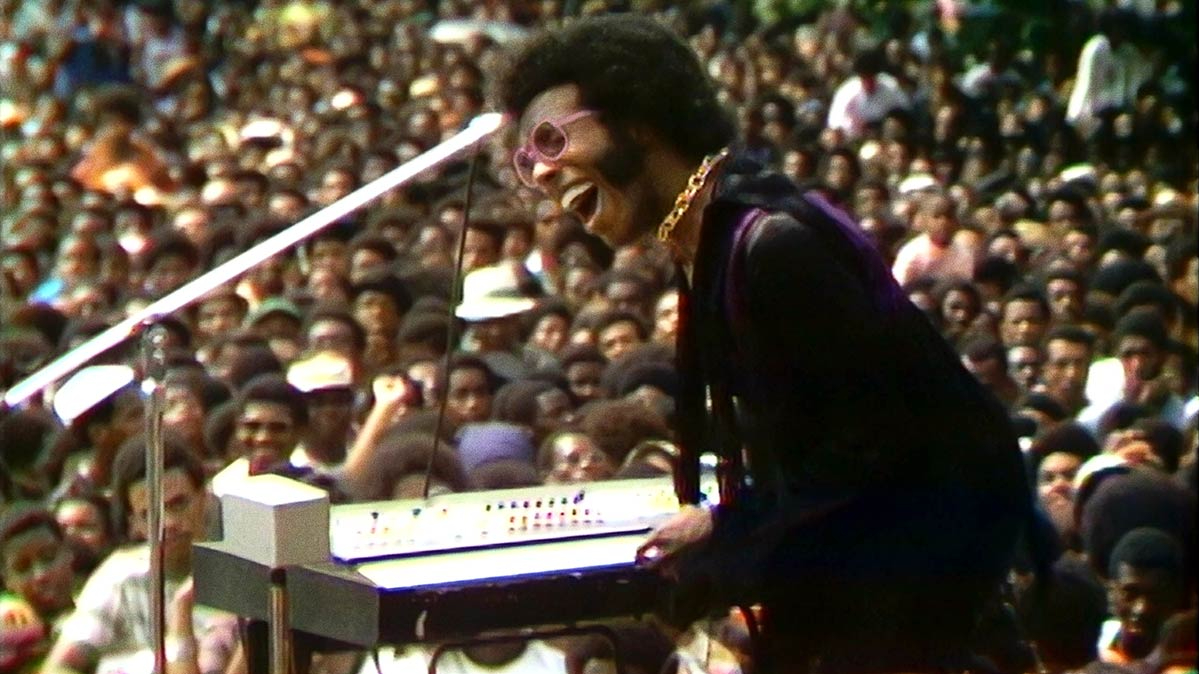 Recalling the moment she walked out on stage and looked upon the assembled crowd of thousands at the Harlem Cultural Festival in 1969, Mavis Staples remembers being “overcome with joy.” The experience of watching Ahmir “Questlove” Thompson’s Summer of Soul (…Or, When the Revolution Could Not Be Televised) achieves similar levels of pure elation, capturing the essence of a moment in time that echoes today.

Musical food for the soul, in equal parts spiritual, personal, reverential, challenging and defiant, it is a remarkable achievement for the first-time filmmaker. Questlove, who is perhaps best known for his time as The Roots’ drummer, introduced the World Premiere of his film to Sundance audiences by saying that he has always considered himself a storyteller. The results of his efforts in this uplifting, restorative documentary prove that he is more than ready to embark on the next stage of his creative career in a new medium.

Perhaps given his preferred instrument, Questlove’s film opens with Stevie Wonder behind a drum set, thrashing out an improvised solo. Summer of Soul hits the ground running and its percussive beat does not let up for nearly two hours. It may be raining in these first images, but the kinetic energy and positivity of this little-known, almost completely forgotten, but seminal music event is infectious. Long-thought to have been lost completely, but found in a dusty basement, the festival footage is like gold dust.

Much like Alan Elliott’s 2018 stellar documentary Amazing Grace, discovering this extraordinary buried treasure of sound and image offers, as Sundance Film Festival director Tabitha Jackson quite aptly noted, “moments of transcendence.” Top of the bill in Summer of Soul’s many wonders is witnessing musicians and festival attendees watching back the grainy concert footage for the first time. Reliving memories, teary-eyed with nostalgia, remembering “How beautiful it was.” Taking place at the same time as Woodstock, the Harlem Cultural Festival drew crowds of 300,000 people and ran for several weeks over the summer of 1969. Why, then, are we only hearing about it now?

By no means simply a concert doc, Questlove’s layered editing of the source material, contemporary talking head interviews and library footage for a real depth of context is extremely well handled. As The Chambers Brothers get into it onstage, the music drops in volume just enough for images and recollections of JFK, MLK and RFK to be told. Stage managing as well as conducting all members of the band and film with real skill, the director stitches all levels of this complex material together, whilst ensuring that the pace and tempo of the underlying/overlying performance continues to a steady beat.

The aforementioned Staples, who sounds as if she had swallowed a hurricane whenever she sings, appeared alongside the great Mahalia Jackson at the weeks’ long musical event in Mount Morris Park. Together, they sing Precious Land – Martin Luther King, Jr.’s favourite song – as the Reverend Jesse Jackson speaks of the great man’s final moments. In what is one of innumerable soaring, hairs-on-the-back-of-your-neck highs in Summer of Soul, it – along with the wealth of context and argumentation included in this enthralling documentary – demonstrates that this was far more than simply a music festival. Overshadowed at the time and since, Summer of Soul brings the Harlem Cultural Festival and a pivotal point in American history into the light.