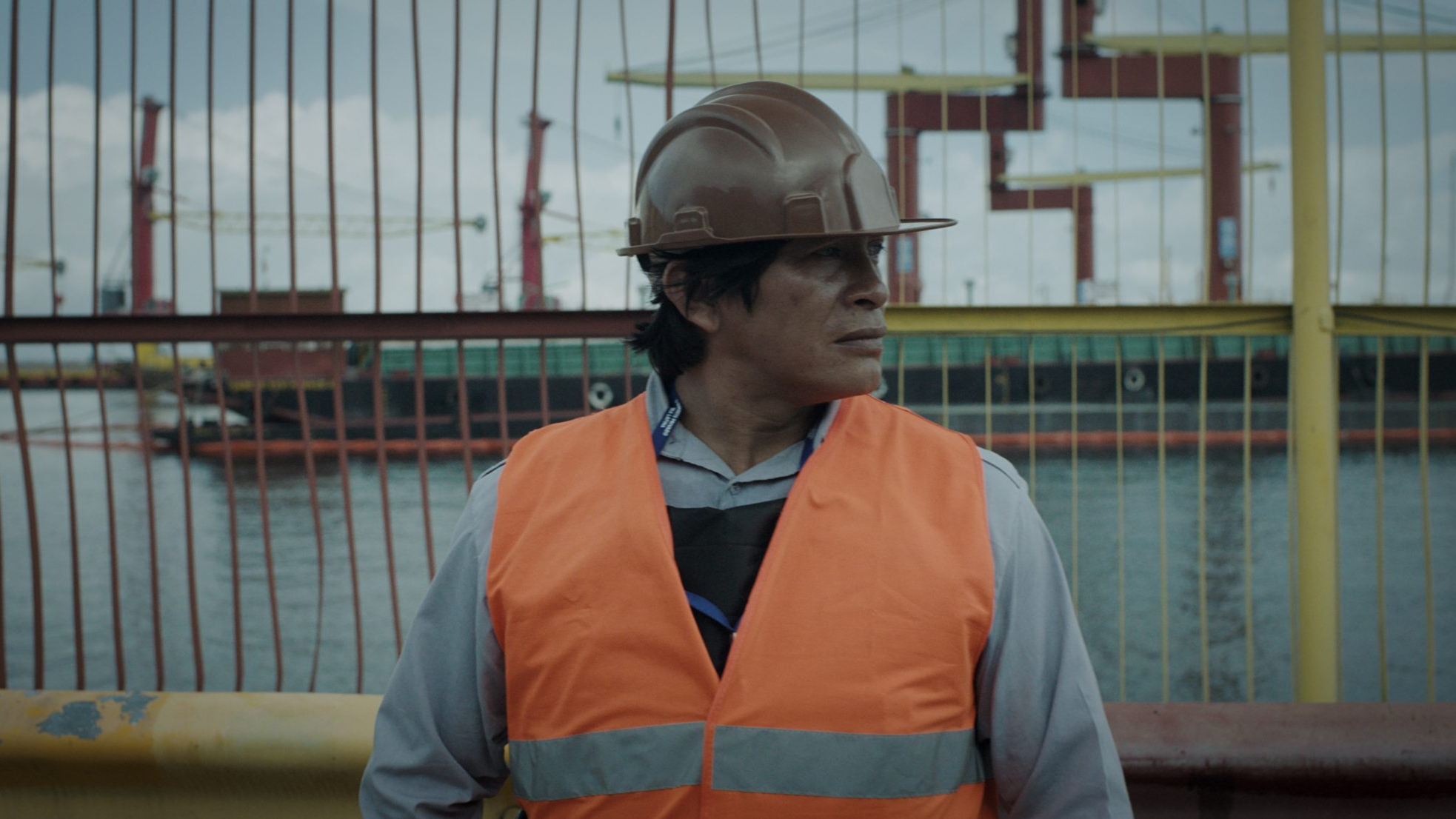 The shadow of far-right Brazilian president Jair Bolsonaro, who once compared the indigenous people of Brazil as animals living in a zoo and whose policies have accelerated the decimation of the Amazon rainforest, hangs over veteran documentarian Maya Da-Rin’s first fiction feature like a sickness. Da-Rin’s documentary credentials bring an authenticity that avoids easy exoticisation of indigenous people.

Indigenous Brazilian Justino (non-professional actor Regis Myrupu) works as a watchman at the river harbour of Manaus Port in Amazonas. Though the eponymous fever doesn’t come into play until a little later, it’s clear that from the first shot of the film an illness is running deep through him. Justino stares directly at the camera in close up, his eyes flickering with tiredness as the camera pulls back, framed by the shipping container behind him as the lights of the port play across his face.

This opening shot establishes a subtle hallucinogenic quality that runs throughout The Fever, much of it set at night in alienating industrial environs. The repetitious imagery of Justino traipsing home night after night create the sense of a looping nightmare in which one is one the verge of waking but is forever pulled back into the depths of suffocating unconsciousness. The sound design underscores this sense of somnambulance; as characters speak out of frame their voices become disembodied and the eerie quiet of the environment is punctuated by the distant noise of industry. Meanwhile, Barbara Alvarez’s cinematography evokes clammy delirium; even the fluorescent strip lights of Justino’s bus journey home are reminiscent of the sterile interior of a hospital.

As Justino sleepwalks through a spiritual sickness, his daughter – a nurse at the local hospital – prepares to leave to study at Brasilia University. This is another point of alienation for Justino, alienated from his indigenous past, the future also seems to be being stripped from him as his daughter Vanessa (Rosa Peixoto) assimilates into Portuguese Brazil. There is no obvious medical cause for his growing fever, but its spiritual source is all too apparent. Scenes of Justino eating and conversing with his family bring some relief, as they share stories of magical forest animals while in the background the TV news chunters about a mysterious beast killing livestock.

It would be reductive to imagine that the myths that Justino and his brother share are perfect allegories for the colonial erasure of their way of life, and Da Rin is careful to avoid framing her characters from a colonialist perspective as homogenous natives imbued with magical wisdom. Nevertheless, there are parallels to the mythic animals who wear different skins for the realms they inhabit and the multiple scenes of Justino removing his watchmen’s uniform before returning home, all the while enduring the casual racism of his colleague. The magical realms of Justino’s stories are echoed in the real world, where spaces are enclosed but liminal, defined by uneasy boundaries that are easily breached.

It’s not until The Fever’s closing moments that we see how close the harbour, which up to this pointed has existed in a kind of abstracted nowhere, is to the forest. It is separated only by a chain link fence, broken, perhaps, by the unseen forest beast. As the monster wreaks havoc in the city, there is more than a hint of magical realism as Justino finally breaches space in the opposite direction, retreating back into the forest and shorn of his city skin.